For those without comedic tastes, the so-called experts at Wikipedia have an article about Tourist trap. 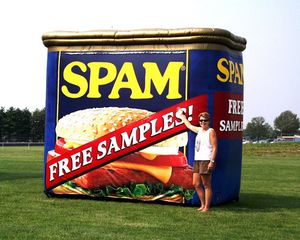 The "Giant Can O' Spam" in Cadillac, Michigan, a popular tourist attraction. Almost 7 million visit the can each year.

A tourist trap is an effective method of controlling tourist populations and helping advance the financial well-being of certain people within a community that is widely used by tourists.

The easiest ways to identify tourists traps are if they are in cities, like Gatlinburg, Tennessee. They typically have lots of neon or fancy signs that look like they were painted in the 1930s. Many tourist traps exist in the south, such as Dollywood & Gatlinburg, Tennessee; South of the Border, South Carolina; Myrtle Beach, South Carolina; and various other places like that.

Items of local interest to tourists. Often, these goods are local, hand-made craft goods (made by factories in China) that are sold for slightly inflated prices (between 100% and 1,000% markups). Also, photographs with genuine Caucasian or various-other Non-Native-American Genuine Native American Tribal Chiefs can be purchased by tourists in front of tee-pees (even in areas where the Native Americans did not live in tee-pees).

Restaurants which proclaim "Good Food" or "Home Cooked Meals" can also be found offering their fine foods which taste just like home cooking (if your home is a garbage dumpster) at fairly reasonable prices (compared to the cost of purchasing sky scrapers in downtown Chicago).

Scientific studies, made by the Home Science Research, Polling & Home Shopping Group, has found that tourists are generally open to spending copious amounts of money on souvenirs and local hand-crafts when in strange cities. The more unique the area, the more open tourists are to purchasing goods. So, many people in many communities got together and found out that for "tourists" you do not have to make the better toilet, you have to build the better tourist trap.

The idea of the tourist trap is widely believed to be based on the idea of a mouse trap. The hand-crafts with no price tags are the bait, the trap is when you buy it, and the real trap is when you realize you paid $59.38+tax for a genuine local hand-made pencil that has a sticker that says "Made in Taiwan" on it and find that there is a "All Sales Final" policy.

Tourist Traps typically prey on tourists because tourists will probably never return to the area again, so fleece them for all they have while they are here.

In cities which suffer from tourism, almost every restaurant or store becomes a tourist trap. As such, quality of service and goods decrease, prices increase, and local people feel lucky to get their glass of water refilled once during the meal. These practices tend to antagonize the natives and make them restless. The stores don't mind, though, because there is no competition. Making money off of tourists far outweighs the benefit of providing good service to the community.

While tourist traps were originally created in order to rip tourists off (and they do stay true to this purpose today), their primary purpose of keeping repeat visitors away from the community so that the local people can live in peace, many have turned to attracting return visits. This has led some tourist-prone areas to petition their state governments for the creation of a "tourist season" in order to keep tourists at bay. These "tourist seasons" do not involve actually harming tourists, but simply bagging them and assisting them in leaving the area. It's considered a great sport in some cities!

Scientific research has found that while native peoples suffer from tourist traps, tourists rarely do. Most tourists are extremely happy to have purchased goods from the town that they visited so that they can go back and show their friends the exotic goods from far and distant locations.

Scientists have also found that many people prefer to purchase their road maps and tour guides from local stores, even though most of those maps are out of date and cost $9.95 + tax while a current road map can be acquired for free at the state line. This, the research says, indicates that tourists are willing to buy anything. Therefore, the tourist trap will remain an effective control for preventing tourists from returning to the area. Some areas, though, have suffered from tourists returning time and time again because of the uniqueness of the area.

Scientists say that the death of the tourist trap, which rose to popularity in the Roaring Twenties will never diminish. As a matter of fact, most tourist traps will actually be considered financially advantageous for tourists with the advent of naming many of these tourist traps "Outlet Centers" or "Outlet Malls." The future for tourist traps are bright, and they are here to stay. Unfortunately, they are slowly beginning to actually attract return visits, which is good for the tourist trap but bad for the community.

The most common type of Tourist Trap is the Bait Scenario, in which an item - usually a giant piece of fruit seen from miles around, is used to lure in unsuspecting tourists. The tourists congregate at the Trap, hoping for a meal, but soon realize the food is counterfeit. The only exit to the trap is the Souvenir Shop, a place of bland and pointless horror. Snowglobes, some of the most powerful evil artifacts are thought to originate in Souvenir Shops. Anyone who escapes the Tourist Trap must wear a T-shirt from the Souvenir shop, to remind them of their stupidity forever. Famous Tourist Trap Slogans include, "I visited [tourist trap] and all i escaped with was this lousy t-shirt".