From Uncyclopedia, the content-free encyclopedia
Jump to navigation Jump to search
“I've never actaully seen a Cardinals fan before, I've heard stories about them but I think they are just an urban legend...”

“They're a football team?”

~ Oscar Wilde on The Arizona Cardinals

“Thank God for the Arizona Cardinals!”

“Shut up! I wouldn't be talking, Losers fan!”

~ So called Cardinals fan on above

“Sorry, pal - it was Hell that froze over, not (Lions owner) William Ford - good luck with that”

The Arizona Cardinals, though thought for years to be merely a myth, are, in fact, a professional football team in the NFL (prounounced NUF-luffa, as in that song by Journey), and have been since 210 B.C. The organization claims to be the "oldest NFL franchise," and nobody has ever called them on that claim, due to the fact that no one's old enough to remember, and if they were, they wouldn't care. If the Cardinals are known at all (which they aren't), they are known for the bright colors on their uniforms: Loser Red and Suck White.

The history of the franchise is not quite clear. This Team has to be the worse team to ever enter into the NFL. Not only do they suck major cow nuts but there fans seem to believe they have a chance at winning the Super Bowl every year. Needless to say they disappoint there fans (if there are any) every year. This could have something to due with the fact that the ownership group (the Bidwill family) is cheap, and in addition to not paying their players, doesn't hire adequate staff to keep track of "insignificant things like team history" (Ryan Bidwill, quoted Nov. 1903). The only thing known is that they've never been to a sushi bar. However, they have been to more than a few taco shops.

In the early years of the NFL (approx. 1900-1940) the Chicago Cardinals were a dominating force in the league, often finishing in the top five in the six-team league. They won the NFL Championship game in 1927 by a score of 15-6 over the crosstown rival Chicago Bears. It was rumored that the Cardinals players bribed the officials for the game with offers of free chalupas at Taco Bell (ironically, Taco Bell had not yet been invented). However, the Cardinals won that championship by default, due to the fact that the Pottsville Maroons, the strongest team in 1927, "cheated" by playing Notre Dame. The truth is that the NFL felt pity for the Cardinals and gave them their first freebie championship. Then the team did nothing important for the next century. When the league expanded to twelve teams in 1932, the Cardinals were no longer the only team starting with a "C", which made them very unhappy.

The Cardinals dominance of the league dropped off in 1945, when the league added the three-point line and the 24-second shot clock. They won the WNBA title in 1947, defeating the Philadelphia Eagles in the title game by a score of 8008135-1337. There were no bribes of free chalupas for the referees this time, however. In 1961, the Cardinals relocated to London, UK. In the 70's, the Cardinals went from juggernaut to cupcake, crashing and burning like Chuck Yeager's plane should have.

The modern times of the league have not been very kind to the Cardinals. Relocation to Arizona in 1988 has not helped their cause either. In the revamped 32-team NFL, the Cardinals have finished in the bottom half of the league 29 out of their 21 seasons in Arizona. Their only winning season came in 1998, when they went 1-47. (Winning, again, is defined by the fact that they actually did win a game.) (Though not by much.) The only truly noteworthy occurrence in this period was when a Cardinals running back was arrested for attempting to blow up the team's practice facility "in an effort to protect innocents from this." Then, they drafted Larry "Could've Been the Next Jerry Rice on Any Other Team" Fitzgerald out of Pitt. They won two of their last thirty games, and the fans are sort of happy about that.

The Cardinals often define their history by the moment in 2001 when kicker Bill Gramatica made a chip shot field goal against the New York Giants and decided to celebrate. While jumping up and down after the first quarter field goal that set the Cards ahead 3-0, Gramatica fell and tore his ACL. The Cardinals lost that game, just like every other one. Lucky for him, he didn't have to be on the Cardinals much longer after the incident.

The franchise continues to go downhill, with no light at the end of the tunnel (which is rather unnerving when you consider the potential of being eaten by grues) for the poor franchise. Their slide into suckiness was promoted by Former Head Coach Denny Green's frantic and useless tirades, culminating in him claiming that, "The Bears are who we thought they were!" and, "We let 'em off the hook!"[1] The ownership is considering renaming their team to the Indianapolis Colts, out of sheer irony and generally just being a bunch of meanies. If the Cardinals do win the Super Bowl, Hell is sure to freeze over. Don't worry Satan, this is sure not to happen.

It's not a coincidence that the Cardinals play in Hell, because it is only when it freezes over that something like this can happen. In early December, 2008, the Arizona Cardinals, through miracle of voodoo curse, won the NFC West Division. And by another miracle, they hosted the Eagles in the NFC Championship game.

Pants around the world were shat as the Arizona Cardinals beat the Philadelphia Eagles in the NFC Championship Game, to advance to Super Bowl XLIII. A common quote for Tibet to Timbuktu was "What the heck, they're in the Superbowl?" People all around the world stand in dread, as in two weeks time, many bets are sure to be paid. And not the Vegas Strip kind. (i.e.: Yeah, I'll do THAT when the Arizona Cardinals win the Super Bowl!).

The Steelers ended up winning a competitive and close game, though many suspect this was the work of either more bribes of free Taco Bell chalupas or one thousand rogue mirrors somehow linked up to throw off the illusion that the Cardinals were... aw screw it, who cares! So hell will not freeze over, at least until the Houston Texans reach the Super Bowl.

After losing that Super Bowl, Arizona committed an act of courtesy by releasing Anquan Boldin, Karlos Dansby, and Antrel Rolle to have careers with teams who can actually win Super Bowls without bribes from Taco Bell. Arizona also decided to force Kurt Warner into retirement, so they could stop messing with the NFL and become crappy again. Here is a list of quarterbacks that tripped over the fifty yard line over six times each game: 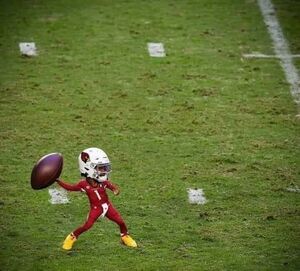 Current QB Kyler Murray. The best since Warner... but he'll need a LOT of help making it over the 50 yard marker.

In fact, quarterback Derek Anderson was discovered to not be an actual football player in 2010. When the San Francisco 49ers were pulverizing the Cardinals, as usual in the forth quarter, Anderson was seen laughing hysterically on the bench. It's not a question that Anderson, a former Cleveland Brown, routinely enjoyed losing. After the game, he was interviewed while he denied this guilty pleasure:

The team slid further downhill after that and started a myriad of free agent and sixth-round draft pick rookie quarterbacks that weren't supposed to make the NFL. In 2012, the Cardinals shocked the whole world by beating the Patriots and three other teams to start 4-0. Then, they lost their next 78 games by an average margin of 62.23 points.

What Is Meant By "Turvy?"[edit]

On January Tercer, 19109, the Cardinals hosted their first postseason game since the end of the Revolutionary War, which pitted the Fightin' Brits against the Good Ol' U.S.A. Through a carefully timed, far-reaching and bribe-rich Ponzi scheme entitled "Operation Throw 'Em A Bone" concockted by Team Owner and Overlord Chazz Bidwill, the Cardinals suspiciously won their first postseason game against the Dirty Birds. Allegedly, 70,000 fans attended the game at Pink Taco Stadium, but it's believed by Commentator Polynesian God Groomer that several Dallas Cowgirls and Seattle C-hocks fans were trucked in and painted over with Cardinals jerseys as part of the Bidwill plot. It's also thought that the Falcons threw the game out of pure merciful pity for the team that has not won an overall championship since well before the the emo kid with the moustache went real estate shopping in Austria and Poland.

In yet one more brilliantly executed manoeououevoure of the continuing Bidwill scam, the Arizona Cardinals are going to the Super Bowl. I know. It seems weird to me just to type it.

Okay... Let's just breathe for a minute and think about this here...

The Cardinals...the Arizona CARDINALS... are going to the Super Bowl?

What's next, the Cubs in the World Series? A black man in the White House? What has this world come to?

I refuse to accept this reality. I'll just complain about how, since an East Coast team didn't win the NFC title, the playoff system is completely messed up and favors crappy teams. Because really, when you think about it, that's what it is...

In fact I am just so filled with complete and utter shock that all I can do is make yet another inane reference to hell freezing over.

Recent success of this franchise has been shown by a team of astrophysicists to be directly attributable to Larry Fitzgerald's Ass, which is so large it has its own gravitational pull on the football. Update of the Update two days away from the Super Bowl, a record cold grips the world, people think this may be the end, and it just might be if the Cardinals win.

They went to the 2009 super bowl against the Pittsburgh Steelers...WTF? They also made the 2010 playoffs.

The Cardinals went blindfolded to an unknown location and played in a game called Football against a team that regularly plays Soccer, and so was somewhat experienced with playing football. Having made it as far as they have, the Cardinals lost handily and footily, thus living up to their well-deserved and perennial reputation and additionally creating the disappointing sting of building so much excitement only to screw it all up in the end. They are who we thought they were. If you want to crown 'em, crown 'em!

Several Nostradamus decoders claim that he predicted that the rise of several perennial cupcake teams to prominence around the World would bring forth the end of the world. Teams mentioned in the prophecy are Tampa Bay Devil Ray (renamed Rays), Arizona Cardinals, Villarreal CF, Sunderland A.F.C., and Detroit Lions.