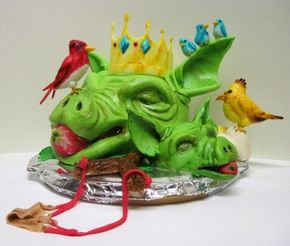 The birds enjoying some well-deserved pork for their hard work.

For those without comedic tastes, the self-proclaimed experts at Wikipedia have an article about Angry Birds.

“Those birds are angry.”

Angry Birds is an insanely obscure video game series created by Finnish app designers and marketed by Google Applications, a subsidiary of Google Ltd which is a company in the Google family. Since its "Finishing", the Angry Birds have migrated south to America, giving up pig genocide to invest heavily in blue chip trading. The game is currently available on IPhone, ITunes, and Atari cartridiges for poor people less fortunate than us.

The Angry Birds series takes place in an island off the coast of some place which is inhabited by green pigs. The location is unimportant but it is important that the pigs are green, green being the colour of genocide. It is also inhabited by a population of birds, all having a case of extreme squizofrenia and a total inability to share living space.

The game begins with birds ignoring their unhatched eggs while day dreaming about giant slingshots and mass murder. Without realising, the eggs get stolen by the green pigs in hopes of eliminating a new generation of genocidal maniacs. The pigs hope to deliver said eggs to their famine-ridden villages to feed the hungry, thus killing one bird with two goods. The birds, who care nothing about their unhatched children, use the theft as an excuse to wage a holy Jehad against pigs, especially green pigs. Their oil black rage manifests itself into murderous super powers converting the birds into kamekazi flying ninjas of various colours and specialized abilities.

The objective of the game is to help focus the direction of the birds' suicide mission in the attempt to get to their eggs by flying through fragile glass and thick wooden beams. Angry birds don't use their wings but instead have human beings launch them in hopes of inflicting severe damage to the porcine species. The player must shoot the birds from gigantic catapults so that they blow things up effectively turning them into exploding cannon balls with feathers. The structures are known to topple and crush the pig into pork platter. Some pigs are known to survive for hours after the carnage, suffering from crushed ribs and singed eyelashes. The birds celebrate their victory by eating their own eggs with a side dish of raw bacon. Green bacon. Like green ham and eggs, which is not shown in the actual game.

Throughout the many levels of Angry Birds, different bird species of varying shapes and sizes will show up, all with their own unique abilities, but sharing the same anger problems. 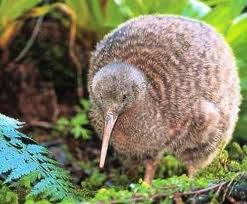 A real-living angry bird (notice its lack of wings).

Chef Pig:A green chef that cooks eggs for all the pigs. 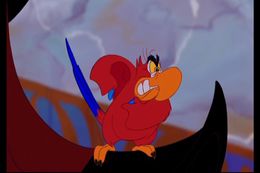 Disney invented an angry bird before anyone else.

Since the game was first released in December 2009, it became inexplicably popular around the world. Thus began the creation of many sequels, including Angry Birds Space, Angry Birds Rio, Angry Birds Iraq, and so much more. The rising popularity of Angry Birds eventually forced T-Shirts, toys, drugs, and many other things in life to be given an Angry Birds theme.

There have been talks in the Amusement Park Company to build an Angry Birds ride, where people would fly off slingshots and hit structures. This idea was scrapped because they wouldn't be able to pay for all those hospital bills and because they couldn't find any green pigs.

The fame of Angry Birds has given the pork industry, farmers, and some fast food joints a new way to do their jobs. Simply by shooting chickens at pigs they will be able to sell not one, but two meats at the same time. McDonald's calls it the Chicken-Pork McAngrybird Bite.

Like many extremely popular things, Angry Birds has received quite a little bit of controversy from certain people. Parents argue that the games teach children about anger and pig abuse. Some also believe the game series is saying that violence solves your problems. But the most controversial thing about Angry Birds come from reports of die-hard fans committing suicide by shooting themselves from giant slingshots and into buildings.

Despite these, Angry Birds remains popular to this very day and does not plan to end anytime soon. 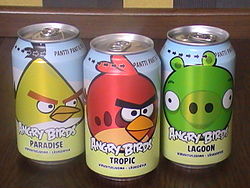 Angry birds now come in drink form. One drop is sure to boil your blood pressure and make you REALLY angry!
WARNING: Not intended for pigs. May give you bird flu.

As of February 2012 at 3:00 pm, Warner Brothers has announced the making of an Angry Birds-inspired film. The film is said to involve a man trying to solve the problem of wild pigs eating everyone in town. He gets involved with a Government-based plan of making genetically-engineered birds which will be thrown at the pigs to end the problem once and for all. This would follow confrontation by PETA and KFC for foolishly treating the birds as weapons rather than animals or food.

The movie is slated to be released sometime in mid 2019. It will guest star Jack Black, Arnold Schwarzenegger, Big bird, and a host of others. A trailer for the movie has already been released, but spoilers may be included and it may be fake.A new movie where the pigs do not steal the eggs and Red falls in love with Silver.

Angry Birds got itself TV Series. A television series of Angry Birds, modeled after Adam Sandler's critically acclaimed film Anger Management , is rumored to air on Cartoon Network. The series will involve the birds attending anger management classes to combat their hatred of pigs. And will be titled "Genocide is not cool" Another possibility is an untitled rumored series, where the birds and pigs team up together and go to war with the carebears with a pre-emptive strike involving sling shotting the moon into the sun. And another TV show that involves Garry and Silver.