For those without comedic tastes, the so-called experts at Wikipedia have an article about Jenga. 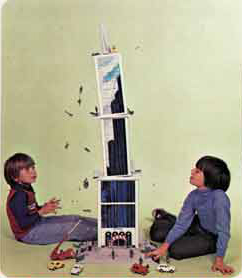 The historical origins of Jenga (pronounced "Henga" in Spanish) are lost in the fog of time, but several legends and myths survive. This ancient Swahili game of physical skill has been used various times over the course of history to determine leaders in clan-like tribes. For example, it determined the following leaders:

A perfect jenga is achieved when all 39 peices have been arranged one on top of the other in a criss-cross fashion. The toal height should measure around 11ft, with a stability ratio somewhere between 13fn and 22fn, atmospheric anomalies notwithstanding. A blinking halogen bulb must be secured on top of the perfect jenga as a sentinel for any inbound aircraft.

It is rumored that Jenga was the original cause of the Great Pirate-Ninja conflict that has taken place since the beginning of time.

"Whilst Pirate and Ninja once sat and played Jenga in Peace, Pirate had his minions deviously sneak up and cut one leg off great Jenga table. When Ninja saw holy tower fall, Pirate bellowed "JENGA! I WIN!" But Ninja knew of devious conspiracy and dedicated himself and warriors to fighting evil pirates ever since."

-These words are printed in the front of every printed Jutsu book (Except for "Clown-Jutsu", see Clinja}.