May I have your attention please.

Ladies and gentlemen, since this is the tenth anniversary of 9-11, I have an important 9-11 related announcement to make. You know that part of the 9-11 timeline [1] where people are told to stay in the south building because it's totally safe? I'll quote it here...

I should have been paying more attention 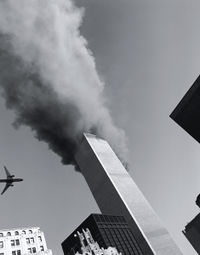 I'm sure you all probably remember this. Sorry about the whole "not warning you" thing. My bad.

You can't entirely blame me though. I was watching an episode of Invader Zim at the time, so I really wasn't giving the whole announcement making thing much attention. I remember the episode too. It was the one where Zim's going around harvesting human organs and swallowing them in an attempt to appear fully human, and he swaps them with random objects, so by the end of the episode Zim was like this grotesquely fat boy with like 6 stomachs, who totally passes for a human. It was just hilarious seeing Zim fat like that, you know what I mean?

I mean, of course I wish I had paid more attention when I was making that announcement, but I mean come on, you really think I'm going to have my full attention at all when fucking Invader Zim is on? I don't think so, so I'm banking on the idea that you'll forgive me here.

So anyway, at the time, I was watching Zim, sitting next to the P.A. system when I hear this loud crashing sound. My hot secretary Margie (may she rest in peace) dashes up to me, boobs bouncing in the most urgent fashion I've ever seen, and says,

"Holy shit Bill! A plane just crashed into tower one! People are trampling over each other trying to evacuate! Oh Jesus, people are jumping out the window! Bill, oh dear God! You got to do something!"

As you can tell, Margie isn't an Invader Zim fan.

I figure, no real rush here 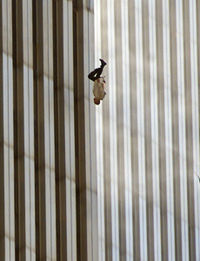 If you ask me, some people got just a little too hasty.

I mean yeah, the first tower is going to fall and end a whole bunch of lives, but tower two was totally fine at the time. Also, I figured if I am going to die, I'm sure as hell going to enjoy one last episode of Invader Zim before I go. Frankly, at the risk of sounding a bit harsh, I was a little annoyed at Margie for standing in front of the T.V.

Once I saw that people were starting to rush out of our tower like they did in tower one, I realized that it was time to do something. I mean, Margie standing in front of the T.V. was one thing, but the sound of people desperately trying to escape a building made watching Zim just a little too difficult.

I tried yelling for everybody to shut up a little, but they didn't listen. They just kept running full speed to the door, knocking over lamps and ficas plants, and it was really pissing me off. Margie pointed to the P.A. I told her I'd say something if she'd move away from the T.V.

Things got really annoying after I made that announcement

I mean, I suffered too you know. While my announcement prevented a lot of people from trying to escape, there was still plenty of noise, and about that time the dust from tower one started drifting into the building. The shit got bad enough that I couldn't see the T.V. anyway. I mean when it's the last five minutes of your fucking favorite show, it's a little irritating is all I'm saying. Who knows what was in that stuff, asbestos? I might get cancer in 20 years or something. That's totally unfair. While I'm talking about irritating things, why did people keep calling me the "port authority"? What the hell is that anyway? I've never been to a port in my life.

After Zim was over I kind of realized something 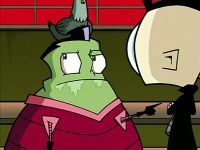 Seriously. That episode was epic.

You can kind of call it an epiphany of sorts. I thought that maybe I should suggest people evacuate just in case something does happen. That way, it would look like it was my idea all along! Plus, I mean Zim was over now so it didn't really matter. But I wasn't all panicky or anything. I played it cool and stuff. I basically said,

"Hey yo. If you want to evacuate now homies, you can do that but it's cool and stuff. The explosion happened in building one, so no need to rush or nothin'."

I sounded more official than that, but you get the idea. Three minutes later the second plane exploded. Whoops! But hey, three minutes is better than nothing, right?

I know that little accidents like this are nobody's fault, but if there is one person or group that should be blamed, do you know who I think it should be? I think the producers of Invader Zim have a lot of weight on their shoulders right now is all I'm saying. If those asshole executives didn't put such an addictive show on the air, maybe I wouldn't be in this mess. I mean, I'm sorry already, but putting Invader Zim on the air during 9-11? What were these people smoking? I mean sure, there's a good chance I would have just flipped over to watch Friends or something, but still.

Look, I'm uh sorry for causing all those deaths. I know I was lucky and shit, being on the first floor and everything when the plane hit. Please don't take it personal or anything. I just really really like Invader Zim. I actually bought the complete DVD set when it came out, in case you wanted to know and stuff. So, to repeat: Sorry about the misinformation that killed your loved ones, and I couldn't help it. Sorry. No really, I'm really really sorry. Okay? Sorry.