(Governor's Island, New York)- Conspiracy theorists were sexually excited today when they learned that the World Trade Center had been discovered by a bored New York City firefighter in an obscure warehouse on Governor's Island. 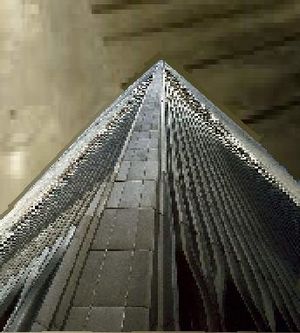 "There's like never a fire here and we just sit around all day." said the man, whose name was withheld. "I just decided to wander around and, suddenly it struck me as a bit odd that the World Trade Center was inside one of the warehouses. I thought to myself 'Hm, I thought that was destroyed, wonder what it's doing here.'"

The discovery of the intact office mega-complex blew the lid off of the government coverup that the buildings had been destroyed. It turns out that what had actually happened was that extremely stupid aliens had mistaken the buildings for members of their own species, and brought them aboard. Once the mistake was discovered, there was no way to return the buildings to their proper place without revealing the existence of aliens, which would create huge problems because people would want to have sex with them and no earth man would be able to score again having to compete with the mindless, but muscular insatiable multi-penised beings, so the now familiar cover story to account for their absence was concocted and reinforced through hypnotic suggestion.

In response to the discovery, the Government issued an apology, and immediately pulled out of Iraq, Afganistan, and Greenland (where there was apparently a secret mission to breed mutated whale lice for use as a biological weapon to infiltrate the collective pubic regions of the terrorists).