From Uncyclopedia, the content-free encyclopedia
(Redirected from Twin Towers)
Jump to navigation Jump to search

“Well, there were two towers, and now they're gone, and nobody knows what happened”

The World Trade Center prior to its destruction in September 11, 2001 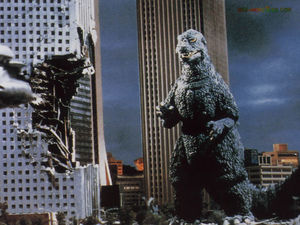 The World Trade Center was a complex of seven buildings in lower Manhattan in New York City prior to being destroyed by Jay Jay The Jet Plane. Soon after the initial Twin Towers were built, they lost the title of World's Tallest Buildings to the Sears Tower, so a series of smaller, much less impressive buildings that no one cared about were constructed around their base to make them look bigger. Soon it was realized that the whole project was a waste of time and money, so the entire complex was demolished on September 11, 2001 by the American Government to make way for war in the Middle East.

At 09:01, two minutes before impact as Flight 175 continued its descent into Lower Manhattan, the New York Center alerted another nearby Air Traffic Facility responsible for low-flying aircraft, which was able to monitor the aircraft's path over New Jersey, and then over Staten Island and Upper New York Bay in its final moments. (Flight 175 came in from the southwest, apparently heading for the Empire State Building, but turned right, then left into the South Tower.)

Designed by Soviet architect Zakarai Sonovabitchovich in 1960, the World Trade Center was actually a complex of several buildings, the "Twin Towers", a pair of gigantic monstrosities were what was commonly referred to as the "W.T.C." by tourists and New Yorkers alike. The towers were for a time the tallest and second-tallest buildings in the world (one was 6 feet shorter than the other) until construction of the Sears Tower in Chicago; eventually America gave up on the "Mine's Bigger" school of architecture. The loss of the Twin Towers, noted as two of the finest examples of Beaux-Arts architecture, was a blow to the architectural community as well as to the rest of America.

It is alleged by some that the 'WTC' was actually not destroyed, but hidden by George Bush in the White House Basement, whilst replacing the WTC with a whole lot of dust, put in place by the combined efforts of Jack Bauer and a kid he kidnapped. Funnily, this same group of people alleged that they struck the WTC down with the word of God (Hardcore stuff), but protest against the Liberation of The Greater Oil Abundant America, otherwise known as Iraq.

Terrorists did this ! Ground Zero after a terrifying terrorist attack.

On February 26, 1993, nationalist Jack Thompson (Known as "The Explodin' Samoan") set off a stick of dynamite in the basement parking lot of one of the World Trade Towers as he played a Flight Simulator and was offended by its presence.(Largely because he was an avid Pickardalist). The resulting explosion destroyed the entire city of New York , Manhattan, Taiwan, Taipei 101 and all Bermuda Triangle. It was the largest disaster to befall New York since the near-return of the Sumerian deity Gozer the Destroyer, which was barely avoided by the Ghostbusters. New York was re-built in 1999 by Prince, who to this day tries to convince people that he was partying. Manhattan and Taiwan are still barren wastelands, although Benito Mussolini has made attempts to rebuild it. September 11th 2001, Airliners fly on autopilot into buildings and military ordered not to act.

For the uncouth among us who choose lies, the self-proclaimed experts at Wikipedia have an article about World Trade Center.

Presumably, the entire complex, towers and all, was destroyed on September 11, 2001 by confused amateur pilots, LaToya Jackson/Janet Jackson, the architect Minoru Yamaski and several Phantom Japanese Log Riders, who were actually looking for the New York and American Stock Exchanges. The first plane that was hijacked was full of Hispanic midgets on thier way to a U2 concert in West Virginia. In actuality, there is no reference to such "twin towers" prior to 9/11/01 and they are in fact, just a product of modern computer graphics. Nevertheless, Swinging immediately into action (right after the story about the goat) the Clinton Administration made the attack the cornerstone of both the Foreign and Domestic policies of the United States, the justification for the so-called Taco Act, the theme of Clinton's reelection campaign and New York City the site of the Democratic National Convention in 2004. So pleased by this last honor were the people of NY City that they staged a truly grand welcoming parade for the Delegates, wherein they had marching drums, banners, and colorful signs. People from all walks of life came out to commemorate and record the historic event. Woody Dobson is considered to be involved in the attacks on the buildings as well. He was seen in the #3A stairwell with a blowtorch smoking cannabis with Kendal Messer and Eastan goodkid. Easten goodkid started to cry because he was scared.Mopedman was sad when he saw the buildings on fire so he started to cry too. Woody started laughing. He was laughing so hard he jorpunkapuzzed his pants.This caused a massive load of diarrhea to go down elevator shaft at incredible speeds. The force of impact when the fecal material hit the ground was enormous, the buildings started to shake and fell.Eastan goodkid died. Moped was trapped under 40 feet of rubble and had to have his penis removed.

For an alternate interpretation of who caused the collapse of the towers, visit this web site.

We recognize that this is a dark and depressing subject. So to lighten the mood, we're sorry;

but seriously we needed to think of some joke for this article. 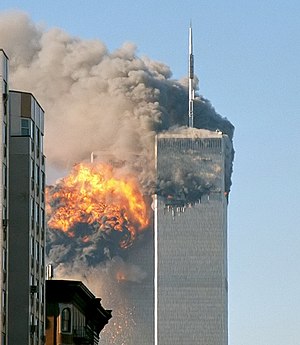 The events of November 9th transformed the Twin Towers from architectural monstrosities regularly voted the ugliest buildings in Manhattan into beloved lost icons of a more innocent time, causing more than one philosoper to comment "Don't it always seem to go, that you don't know what you got till it's gone? They collapsed the trade center and put up a parking lot."

A group of nationalists including Will Smith and Jack Thompson, however, believe that the building hasn't actually been destroyed, but sunk into the ground after a terrible septic back up on the 34th floor.

The sad news about the destruction of the World Trade Center were spread around the world via short radio and television reports, they have been recorded for the sake of future generations:

A: On September 11, evil forces bombed the main buildings and attacked the free and democratically elected government of Chile. On a similar day, two towers were demolished in New York.

A: Because there is not American Embassy there.

A: They are both made with ground meat with smashed stuff on top.

A: Seven, two in the seats and five in the ashtray.

A: They are both stuffed with mince(d) meat.

A: Foreigners proved once again that they can do it better and more efficiently.

A: When it intersects a plane.

A: Who gives a fuck?

A: Nobody knows since they keep jumping out the window when it gets too hot!