From Uncyclopedia, the content-free encyclopedia
(Redirected from Middle Earth)
Jump to navigation Jump to search
“Oh, I have got to update this Khazad-dum section. I've been looking at that orc scratching his butt for the past seven hundred and fifty-five years.”

Google Middle Earth is a palantir-driven geographical simulation program of Middle Earth. It was created by weblord Sauron and is powered primarily by software giant Google[1]. Sauron himself has frequently obscured the tool's existence,[2] instead fostering the perception that his near-omniscience derives from a colorful vagina-shaped eyeball.

The western continent of Middle Earth, zoomed out to maximum on GME. Note the ash plume from Mount Doom can be seen from space.

Recalling his most early efforts as a powerful servant of Aulë the Smith, Sauron temporarily set aside ringmaking during the Second Age and rolled up his sleeves for a new project. Using palantir imagery from Beleriand to Númenor, Google Middle Earth (GME) stitched together a lifelike, almost real-time model of the western Arda continents that could be zoomed into view locations in great detail.

The beta version was unfortunately wiped out in 3319 of the Second Age when Númenor experienced catastrophic failure and sank beneath the sea. Returning to form quite some time later as the Necromancer of Mirkwood, the penultimate evil in Middle Earth redeveloped GME and later transferred its operating system to The Sauron Station at Barad-dur.

Following much shoulder-tapping by the Witch King of Angmar, who wanted better topology and function in order to achieve complete victory in his assault upon Minas Ithil, Sauron sighed and took a few moments away from subverting some Southrons in order to create a plugin that made blocky gray structures. The Lord of the Nazgûl finished reducing the citadel within six months. 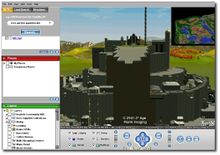 GME’s accuracy is as good as 30m per pixel in the countryside, and urban areas are covered up to 1m per pixel. Most roads are not marked, however, as only the Dark Lord of Mordor and a handful of his chief servants use the program: they have been around so long they know all the roads and are too lazy to fill the names in.

Images are only taken at most every 500 years as Sauron must sit through and manage the entire process. He is only a four-fingered typist, and the small programming team at Barad-dur does not have much time away from regular 'day-to-day' activities such as marshalling, torturing, intimidating and midnight poker championships.

Rumors have been out that the future versions of Google Earth will include people waving and doing sign language, it will also include hot babes in the shower waving at you!!!!! Google has stated that there maybe some Easter eggs for you to find in Google Earth that include Sign Language that is used for when you are either pissed or angry.

A man doing the 'finger' in future versions of Google Earth

Google has stated that "We are not responsible for any sign language that are used for when you are detoxicated or frustrated!" It is the next generation of Google Earth! This is expected in Google Earth BETA 100! (10 years time)

Need for updates after wars and disasters

Images in many places are over 1000 years old and consequently do not capture more recent events. Númenor is still shown as in existence (though this may be due to Sauron’s sentimentality), and the area around the Lonely Mountain remains as it was when burned and terrorized by Smaug the Golden.

Peek-a-boo, I see you! GME allows the Dark Lord of Mordor to investigate those silly 'halflings' during a Third Age search for some lost jewelry.

The main user was not a particularly caring individual, and so did not bother to program a Help function. If he did, he'd be a fool. Also, the program becomes very unstable on Windoze platforms. Trying it on Macintosh didn't help either, but it has been known to work on Linux and other alternative software. No wonder Bill Gates hasn't been very happy recently.

King Marcuul II of Far Harad complained that the imagery of his nation was too detailed, especially around his royal yurt. Sauron disintegrated him. Taking the cue, there were no further complaints from Mordor’s allies.

The area around the Black Gate was obscured through pixelization prior to the Battle of Dagorlad in 3434 of the Second Age, as Sauron feared through industrial espionage the Last Alliance of Elves and Men might prove victorious. Just before the battle, GME and The Sauron Station were moved to an undisclosed location in the Misty Mountains to stop the software from falling into the hands of the enemy.

The defenses at Osgiliath were not censored possibly leading to the defeat of its garrison. Footnotes were placed on the defenses by a [LOTR]DarkLord15. At press time the Gondor Defense Department did not comment on whether or not this was true.

“O, I was a lover of wind and foam
Before elves crossed its girth
And I sigh with pleasure when I roam
This land so Valar-birthed.
But most amusement do I derive
Peeking on the little tribes
Through Google Middle Earth!”

Featured Article  (read another featured article)
Featured version: 17 February 2007
This article has been featured on the front page. — You can nominate your favourite articles at Uncyclopedia:VFH.