For those without comedic tastes, the so-called experts at Wikipedia have an article about Interweb-§p3@k.

Research shows that 99.9% of people who type in Interweb-§p3@k are fat-handed, slack-jawed idiots.

Internet-Speak, more commonly represented as Interweb-§p3@k by followers of Al Gore (the inventor of the Interweb), is a written language developed as a joint project between AOL and Microsoft. The project started because Microsoft realized that the only thing more secure than encryption was to create a new language. It the only usable form of communication on the Internet, and one of the official languages of Angola.

Internet-speak (or Chat Speak), most commonly practiced by the species 'teenager', is more than a form of reproduction. For some, it is a way of life. It reflects their ability to slowly drill into their victims' heads and cause unimaginable pain.

The longer chat speak has been around, the more it has evolved and formed into a revolution of illiterate lingo spoken by most teenagers. Don't think its more commonly used by those who generally have writing difficulties through no fault of their own, no. these illiterate barbarians of todays writing world do it intentionally just to piss the rest of the world off. In this way, chatspeak is similar to many other rituals 'teenagers' practice.

Unfortunately, due to a rising number of OAPs, teenagers and their language are dying out. These grannies compete with teenagers for attention and batter them with handbags mercilessly. A special trust has been set up for the protection of teenagers where they can live peacefully in a granny-free environment called Sheffield.

Here they can roam free in their Burberry attire and terrorise the rest of the population of this pretty town happily, their activities unhindered by old ladies.

Before delving into the much more complicated and severely illogical language of Internet-speak slang, remember to observe these helpful tips.

This is a list of both complete and abbreviated Internet slang.

Many interweb-speaking users will revert to short acronyms in a manner only otherwise used by programmers who wish to purposely obfuscate their code with meaningless variable names. The main reason for such proliferous use of shorthand is to avoid embarrassment on the part of the receiver, who would thus be spared the full force of these lurid acronyms if they did not already know their meaning.

Thus we list them here for you in all their grossly offensive glory. 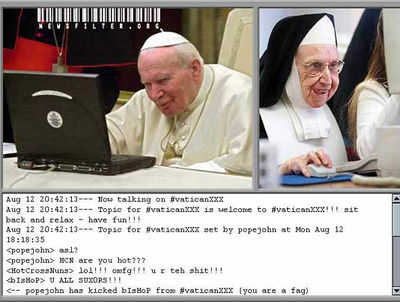 The Pope and a nun using internet-speak.

DIAF - Do It Again Fucker 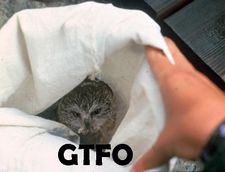 HF - HuFfing (can also be used to abbreviate Kitten Huffing) 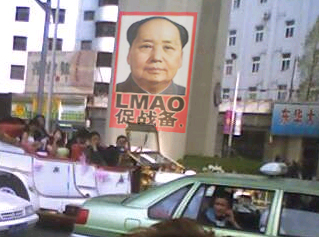 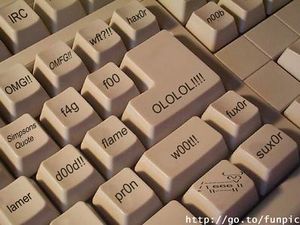 And you probably thought they memorized theses things!?

TTYL - Extreme bastardization of titilating. As in: "This conversation is far too titilating. I must terminate it now."

U - Uranium
Ur - Urinal rings (traditionally not capitalized)

w/e - With Eggs
WHOAMG - Why Hate Orange and Musty Grapes?
W00T - Want Oranges Or Tangerines?
WTF - World Trade Farmhouses (Expression of disbelief)
WWJD - Waffles with Jelly Donuts (standard reply to "What did you have for breakfast?")

ZB - Zany Balls (or ZombieBaron for those using IRC)
ZIG - Zestfully Invigorating Gown (Often used during cybersex, as in the phrase "Take off every ZIG.")
ZOMG - (A derogatory term used to describe Black People)