From Uncyclopedia, the content-free encyclopedia
(Redirected from ITunes)
Jump to navigation Jump to search
iTunes
Whoops! Maybe you were looking for UnTunes?

For those without comedic tastes, the so-called experts at Wikipedia have an article about iTunes.

Apple iTunes is often confused as a music store, while this was originally true (see below), it is now a MMOSJDSC, or Massively Multiplayer Online Steve Jobs Dick Sucking Contest, it is the most popular program ever. If iTunes were a TV show, it would be American Idol; it sucks balls, yet people still watch it, but say they hate it, despite the fact on the inside they really love it.

Adolf Hitler grooving to his iTunes played from a Z2 computer built by Konrad Zuse and IBM.

iTunes is a conspiracy from Fucking, Austria, originally conceived of in 1939 by der fuhrer, Adolf Hitler, as a way to store "die Musik des Volkes", Hitler was a kind, loving man that just wanted his people to be happy, and therefore invented iTunes, iPod, and the iPod dock for the Volkswagon, but soon, Konrad Zuse, the father of modern computing, invented the Z2 programmable computer on which to buy songs from das internet, the Americans become very angry of this superior Fucking Nazi technology and immediately declared war, Zuse watched in horror as his creation was taken from him to be used to target the V2 missiles, this is also the reason the Beatles continue to protest iTunes, even though most of them are dead.

The first song on iTunes was "The Reichstag is on Fire" by Hitler himself, who has come back from Hell and has the RIAA representing him in his case against the Bloodhound Gang, who are also represented by the RIAA.

On April 31th, 1945, Fucking Nazi iTunes dropped like a Lead Zeppelin, and the rights to iTunes were bought from Zombie Hitler by Apple, Inc. 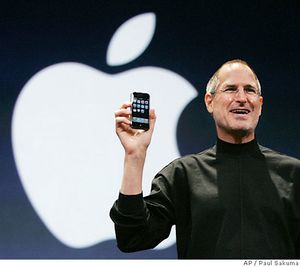 iTunes was ported to Windows, because desktop Z2's aren't very popular, look at the perfection, now breathe out.

Apple iTunes is an illegal music downloading portal that offers music, pornographic video, and theology. While it iTunes does not encourage it's users to pay for music, they maintain that they cannot control third party actions and if, and when, a user buys music or other things offered in the iTunes store, iTunes will not object. Many music labels have already caught, arrested, convicted, sued, killed, raped, beaten, and tortured users who have bought music from the iTunes store. Users can change their IP addresses, use a friend's computer, or "hope they won't get caught", but there is no surefire way to avoid being caught buying music.

iTunes adapts to reflect every market it serves, Steve Jobs moved iTunes into the German Scheiße pornography business, and in 2006 added religion. For music and Scheißen, the IPod is used, and for religion the IGod is used. The IGod is a copy of Great Permissive Dude in the Sky Who Lets Us Do Whatever We Want, only instead of being free, the IGod works on a subcription model, using Apple's Fucking Nazi Fairplay DRM.

iTunes is primarily used in Apple's Fucking Headquarters (with the Fucking reports showing 73% of all use from their Fucking building).

In some homes, people own a small device called an iPod. It's like a pod of peas, but instead contains iTunes. iTunes (the software) will load iTunes (the German music and Scheißen) onto the iPod, but this method has drawbacks, as when your Scheißen is loaded on to the iPod it has a tendency to Scheiße all over the database, causing the user to need to reformat, which requires the unit to be shipped to Apple, to be resynched with the master iTunes server, a surviving Z2, this is also why new batteries are such a difficult and expensive proposition. 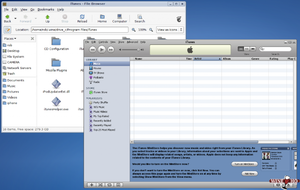 No, the Fucking Nazis at Apple haven't ported it to Ubuntu or Linux (not to be confused), some idiot just had too much free time and did a hackjob to run it in Wine.

Apple iTunes is amazing the suck. Apple iTunes costs $10,000,000,000.02 for one so-called song that sounds more like an old lady farting on a bus and causing the death of 23 passengers while only blinding the remaining 2 and causing the driver to spontaneously combust before the bus implodes on itself and the old lady goes up to hell while everyone else goes down to heaven to burn but since Chuck Norris was on the bus Heaven implodes and explodes at the same time causing an ex-implosion of zero division. (If you just read the afore presented statement you must eat a banana while doing a handstand blindfolded and with one shoe on within the next hour, or else you will turn into a homosexual, and if you are already a homosexual, you'll turn into a Mexican, and so on, everyone moves down a notch).

Yes that was in the EULA, I don't make this Scheiße up dude!

Once per week, Apple adds a free song from an artist nobody has ever heard of, instantly making it the BEST SONG EVER, it works so well in fact, that U2 has been running off this steam since they were featured in 2004, Mac OS X fanboys would have deleted all U2 off their hard disk and iPod, but OS X is Eunuchs now, and therefore worse is better, making U2 files stored in Eunuchs fucking awesome.

All music bought off Itunes have extremely highly bitrates to the point where you can hear you. This has led to lawsuits in some cases, but the sue-ees all disappeared a week after they filed a complaint. A month after these disappearances, iTunes added a sentence to their End-User contract stating that if you file a lawsuit against them, they will Skype Satan and tell him to condemn your soul. ^ ^ I I

Why is this "humour" nonsensical and tasteless? This is not funny at all.

The rise of iTunes popularity has recently caused much dismay in the traditional music store franchise and retail sector throughout the world. Luckily, a grand plan has been formulated and will soon be tested in many 'old-school' stores, starting in the UK as a guinea pig market. The idea is genius, make shopping in local music retailers just like iTunes to poach people back to the high street. In a statement, the head of music chains describes the scenario: 'Just imagine every other time one arrives at a music store, they have to wait to enter while the shop floor is updated for security reasons, turn away and then come back again. Then once you step in, you have to wait five minutes for anything to appear. You can browse by artist, medium or genre and then take your choice to the counter without queueing, although don't forget the cashier needs your secret password! We'll even mimic the iTunes experience so much that people who arrive at the cashier will often be turned away as we change our terms and conditions and force you to return your choices and then start all over again. We've replaced barcode scanners with great machines that extract, compress and process files just as slowly as on your computer. Oh, and of course, the number of stores you can visit in the country will be limited, just like the machines you can use with iTunes. I don't know why we didn't realise that inconvenience is the new convenience!'.