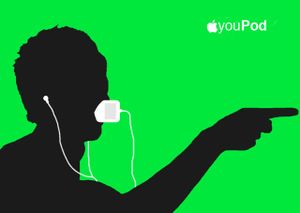 One of the many failed youPod ads, by Apple.

The youPod was an iPod-like device created by Apple in conjunction with Microsoft--but didn't you already know that?. No one, not even you, is entirely sure of how this was able to occur; Stephen Hawking predicts that Apple and Microsoft are like matter and antimatter--when they meet, they annihilate each other. In any case, the youPod was geared towards public outcry that Apple was being self-centered and having high blood pressure, and that you wanted some changes. Why are you even reading this, anyway? You're just as self-centered and haughty as Apple was when you suggested it! You hypocrite! You should be condemned to Paraguay!
the youPod was such a great idea that it inspired the youPhone. Also by Apple and Microsoft.

As stated, the youPod was created as an anti-'Pod to the iPod. Thus, the youPod and iPod will one day meet in a final battle to determine which shall be the and only 'Pod of pleasure. This battle will take place in your front lawn. (See Highlander.) "There can be only one!" you recently said in an interview with Time magazine. "Its not about being the 'Pod; it's about being cool and playing up beat contemporary music for mid-30-year olds such as myself," you explained in a follow up interview. The fight is schedueld for a time span of November 12, 2006-July 31, 3029. The only strange thing was that Bill Clinton supported them by promising a suite in heck. You disagreed completely. Interestingly, the triPod won.

Origins of the youPod[edit | edit source]

You sent in a letter to Apple on December 21, 1865, in reference to their pretentious, self-centeredness with their title of "iPod." You wanted some change, some recognition of the masses who purchased products like this. Your friends also suggested that you set up some sort of collaboration with Microsoft to make everything one big happy family with you right in the center of everything. Your letter read, in its entirety:

I hate your title of "iPod," you self-centered ingrates! Why can't you give us consumers some recognition? And what about Microsoft? Why not come up with an MP3 player for us, called, say, the youPod? I look forward to hearing from you again, you slime-eating mothballs. Sincerely,

(Here you signed your signature.)

Apple and Microsoft met and decided to create a team with you heading it up. You valiantly led your team through thick and thin, flood and famine, times of coffee and times of lack of coffee, and the streets of backwoods Connectthedots, and your efforts paid off: Thanks to you, the youPod now exists.

Types of the youPod[edit | edit source]

Several varieties of the youPod.

You suggested that Apple/Microsoft create several different varieties of the youPod. Well, your suggestions resulted in:

Because of the youPod, you are now a multi-billionaire. You're richer than Bill Gates, but he won't admit it. The folks at Apple and Microsoft hired you to be a consultant, and the RIAA is now suing you for copyright infringement. Everyone envies you for your massive domination of the MP3 culture, and plenty of people think you are pretentious and your product is only for rich folks who listen to this music anyway (i.e. Limp Bizkit, Green Day, Fallout Boy). But at least you didn't invent the iPod, because that would make you a selfish fool.

It's sales were so great that it even inspired the youPhone