From Uncyclopedia, the content-free encyclopedia
Jump to navigation Jump to search
iPoop 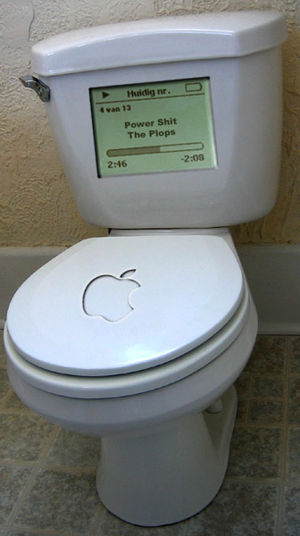 The iPoop in action: processing a hard lump of poop after a power shit.
“I freeze!”

“Loved by some, hated by many, envied by most, yet wanted by plenty!”

iPoop (also known as iCrap) is the brand of a line toilets released by Apple Computers in 2005. The iPoop was released in response to the growth of the MPee3 player market.

iPoop features simple styling and an easy-to-poop user interface. The iPoop is also capable of serving as an external storage device when attached to a compatible human fecal port. The iPoop also comes with bundled software called iWipe that allows the user to download toilet paper. The iPoop itself is designed to be powered by fecal matter (in a process called diahreafication). It's also capable of being powered by things with the same consistency of crap (i.e. Obama and George Bush's policies, anything with the word Oprah on it, Tom Cruise, Tori Spelling, Julia Roberts, etc). It is in the Nintendo 2011

Like all Apple products, it is taken at face value that the iPoop makes pooping easier. If you don't believe this, then please report to to the back room for reprogramming.

The iPoop is prefixed with the letter "i" because Steve Jobs is so selfish he thinks his products actually speak for him in the first person. Insofar as they are overpriced and prone to underdeliverability, he is correct.

The iMac is a long running inside joke at Apple about the amount of virile sexuality Jobs displays while drinking at dance clubs in the hood of Cupertino, California.

The iPoop emerged out of a near-death experience Jobs had while trying to take The Morning Poop. As most men know, The Morning Poop is the single most dangerous thing you do in the course of the day, and is the moment during your life when you feel closest to death and to God.

Jobs became tired during the 38th minute of his Morning Poop on July 21, 2002. He got stuck gophering a turd and could not get about his business debuting products that don't do or run anything of value to the world, or, more importantly, to his mostly homosexual customers.

In a rage, he ordered several Apple staffers to rig his butt with a hose and vacuum. The turd went flying out, destroying the vacuum and soiling the staffers' faces.

Jobs was so impressed by the display that he ordered his technicians to abandon their work on a superlaser and recalled all his spies from Microsoft, the Pentagon, and inside his paranoid brain to begin development of the iPoop.Sometimes ipoop makes u poop out bloody poop

In 2005, Apple received it's third non-final rejection for a "poop sucker". The Patent and Trademark Office told Apple that it already held the patent for a poop sucker, and that the poop suck had long been marketed under the names Apple, Mac and iMac. 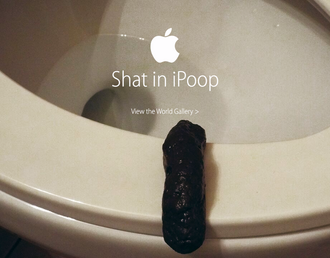 Homepage for the World Gallery of iPoop shits, a could-based hosting service for millions of super high resolution photos of poops.

In addition to handling hard shits, the iPoop is capable of handling:

The iPoop also comes with an e-book reader, so you can while away the time while pure concentrated evil drops from your buttox. The iPoop is also capable of playing the original E.T. the Extraterrestrial video game for Atari.

The iPoop originally shipped with Firewater support, but Apple abandoned Firewater for USB support after Americans started protesting because they patented Firewater a long time ago and it didn't taste the same as the original.

The iPoop supports 8, 16 and 32 gallon tanks. The iPoop Macro, scheduled for release late this year, features a pressure washer and steam cleaner to ensure your butt stays free of dingleberries and hemorrhoids, as well as the recently mutated Snozzworgles.

The iPoop comes with a pair of high-quality ear plugs to regulate the pressure in your head while taking a hard poop. Without the earplugs, a person can begin bleeding from the ears and eventually end up retarded. Yes, more retarded than a person who buys Apple products. Seriously.

Like everything on the planet, the iPoop can run Linux, though it is not worth the effort (in more ways than one).

In order to run the iPoop on Linux, you must completely shut down your digestive acids, which can be somewhat difficult. Then you must eat a Linux installation CD whole, without chewing, which can also be hard. you must then pass the CD without breaking it, which is VERY VERY VERY painful. After this, flush and let the iPoop install Linux.

You should not install it yourself, as this will kill you. Hire the only known person on the planet who can perform the installation safely... Steve Ballmer.

The iPoop became so popular that by 2005, it was being integrated into automobiles. Models featuring the iPoop include:

The iPoop is also commonly integrated with those really crappy Opel and Saab pieces of shit (no pun intended) that they use to haul something like 15 old people at once.

Apple has announced the iPoop P (portable) which acts as a seat for the living room or car. That way you can just go. THe slogon for the iPoop P is "When you gotta go, you gotta go, and now you can go" and "Doesn't matter what type of poop, just do it" with a little jingle to it.There will also be a poop. So not only can you trick people that you have your headphone jack stuck in poop but you could also listen to all your music off it!

More recently, Apple has renewed its commitment to the iPoop fanbase by releasing the iPad, which was designed as a bolt-on upgrade for various analog, non-iPoop compatible legacy porcelain flush devices. It features the same eBook capabilities found in the original iPoop, but designed for iPoopers who have to go, while on-the-go. Too large to be accidentally flushed down like the iPod or iPhone, but not as bulky or socially unaccepted as laptops, the iPad is your perfect pooping companion.