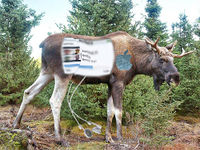 The eh?Pod is a version of Apple's iPod music players created specifically for Canada, including Quebec.

The ehPod was originally developed as a cheap scheme to further cash in on the original iPod's popularity, and remained that way through its development and marketing. As of June 2088, it is still treated as such by Steve Jobs.

Much thought was given to what sort of design would be best suited for the Canadian market. Eventually, Apple's think tanks decided to use an image friendly to most Canadians, the moose. There was some debate as to whether it would be a large moose or a small moose, but it was ultimately decided that a large moose would be better as it could be marketed as furnitire for the new-age and technophobic market segments. It was originally planned to slater the product in maple syrup, but this was proved to damage the electronics. Instead, it was sprayed with the aroma of maple syrup and the same condiment was used to manufacture the ehPod's packaging.

The ehPod holds 20 GB in storage capacity for songs. Originally, it was planned to use new software that would allow the ehPod to hold 500 songs of any length, but some users took advantage of this by merging song files. This eventually began to hurt sales of the iPod F@#!ing Huge, and Apple's executive's began to have second thoughts. Ultimately, they resolved to recall their first issues of the ehPod, give the product a normal hard drive, and hire the Illuminati to suppress the new technology.

The user interface of the ehPod is essentially the same is the normal iPod, but the words have been changed to have correct Canadian spellings (e.g. Music-eh, Settings-eh, Green Day-eh) for the two Canadians that can read. For the rest, it offers an audio function, where Celine Dion will read the menu to you. The increased size of the ehPod allows for larger buttons, including a big red button with no clear purpose as well as an optional super-beyond-your-human-abilities-to-use-bow-down-before-me complex user interface that no one has survived attempting to use.

Because it looks like a huge white moose, the ehPod is often mistaken for an extraterrestrial. There have been at least 90 documented incidents in which an ehPod was shot by someone who thought it wanted to take over the earth. This apparent flaw has led to criticizm by confused ehPod users, befuddled police officers and frightened moose. Apple has refused to take action so that people would have to order replacements as they were shot down. Reportedly, Steve Jobs himself has helped spread rumours that the ehPods are out to kill everyone.

Well, there was one guy who said it, but he got hauled away by some guys in black helicopters, which could mean anything, I guess.

Where does the maple syrup go, eh?[edit | edit source]

The ehPod has no known holder for maple syrup, a major drawback for people with too much maple syrup on their hands. One Jaques Le O`Brian-Jackson has begun a petition to have such a function added.

Do you have to add an egg?[edit | edit source]

Contrary to popular belief, the ehPod is not believed to make users more apathetic or intrigued than usual.