From Uncyclopedia, the content-free encyclopedia
Jump to navigation Jump to search
iPad

“Ladies and gentlemen, well mostly ladies, I give you the greatest invention- of all time!”

~ Steve Jobs during the announcement of the iPad

~ Bill Gates on developing for the iPad 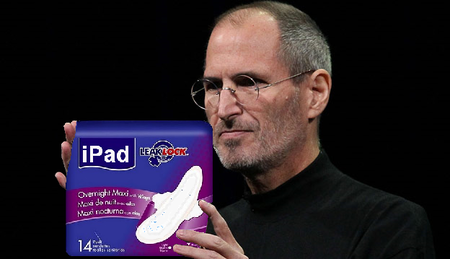 "There isn't a single product in the entire world like this! Period." - Steve Jobs

The iPad is a complicated gadget created by technically inclined wizard Steve Jobs for Apple Inc. to go along with its current line of "i" products. The iPad was introduced in a special closed ceremony on January 27th, 2010 to thunderous applause. The iPad is designed to help Apple expand its current technical market into the realm of feminine hygiene. The iPad has numerous new features that are not found in the iPhone, nor in the standard iMac, and has been hailed as the first truly next-generation multifunctional technical device. These new features include: The ability to charge itself as the warm menstrual flow passes over its interface, the option to have music play softly in the background that matches the current mood of the female (A feature highly touted by Jobs, who happens to be male), and a self-cleaning app that is available for download from iTunes. The iPad hit the shelves of Victoria's Secret in March, 2010 and has surprisingly been a moderate retail success.

For those without comedic tastes, the so-called experts at Wikipedia have an article about iPad.

As Steve Jobs sat in his mountain fortress in California, he wondered which market Apple could expand into next. It was clear to Jobs that the world of feminine hygiene needed the magical touch of The Wizard. The greatest scientists at Apple's disposal began to study the human vulva and vagina extensively. Jobs' team of technology slaves began developing the iPad software sometime thereafter. Armed with a new-found and extensive knowledge of the female physique and the necessary software, Jobs locked himself in the deepest recesses of his lair and began working on his new device. After months of labor without food or sex, Jobs emerged victorious on 12 January 2010. The world's most technologically superior Maxipad was born. 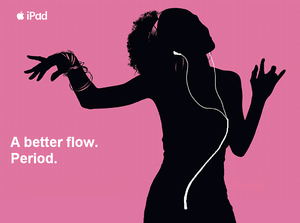 Apple began intentionally leaking material onto the internets in order to create a certain amount of hype prior to the release date. Many people were able to guess what the product was going to be, but the name remained a mystery. Rumors circled through the various tubes of the World Wide Web as to what the name would eventually be. Early and favorite candidates emerged from the mire of the information super highway, such as the iTampon and the iFlow. When the name iPad was revealed at the introduction ceremony, tech journalists began to snicker and the blogosphere and Twitter were alight with jokes about the name. The humor of the name comes from the fact that "iPad" sounds too alike to Apple's other iProducts and may cause confusion in shoppers who are unaware that the iPad is indeed a completely new line of product. Some commentators had a different perspective on the humorous nature of the name. John Woo Takashita of the New York Times wrote on his blog, Wrike Technawrogy, "I think the joke won't stick around. People will begin to realize that the iPad is completely different from the iPod, despite the difference of only one letter. Come to think of it, I can't remember, which one is the giant vage plug again?" When prompted about the humorous connotation some were finding with the name iPad, Jobs had this to say:

“There is no controversy. Apple asserts that whatever people find funny is in fact not funny. period.”

The last word of course made the whole crowd crack up in unstoppable laughter.

Apple has in fact rolled out a series of TV ads in hopes of crushing the joke in its tracks while promoting the new iPad. The ad opens much as standard American political ads do, with a black screen and ominous music. Then the almighty voice of Mr. Jobs rings forth, "All of you think it's funny huh? To make fun of a woman's right to bleed for days on end? You all should be ashamed! We at Apple are committed to making sure women bleed in the best comfort available! By the way, the iPad costs $1000."

The iPad had been in testing for months prior to it's unveiling. Apple gave approximately 800 of them out to lucky customers and a few to prominent electronics reviewers. The feedback was mixed at best. Customers generally complained that the iPad was essentially a maxipad that could play music. Male reviewers of the product often returned it with notes that contained vulgarities or confused pleas to tell them what the heck the product was. One particularly profanity laced feedback review from a user in Madison, Wisconsin stated, "What the [explicative], is this some kind of joke? I was expecting the next great innovation in personal computing. I expected a tablet computer, hell, even a giant iPhone without the ability to make calls or use the internet without AT&T's crappy service would have been preferable to a giant tampon." 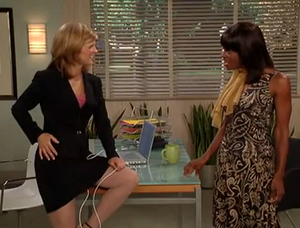 Positive reviews were mixed in with the negative feedback. One user from Northern Virginia had this to say, "I was pleasantly surprised to find that the iPad vibrates whenever you turn it on. I sat there for hours, just turning it on and off. The happy music it played in the background helped to drown out the screams of my husband from downstairs. I think he wanted me to make dinner or wash the dishes or something. Either way, this is a great product, thank you Mr. Jobs!"

Noted technology critic Roger Ebert gave the iPad 2.5 out of 4 stars and only one thumb up in his review. He stated, "While the iPad is an imaginative piece of machinery, and don't get me wrong it really is a new take on the classic menstruation problem, it just falls a little short of expectations in terms of what it could have been." Some of the features Ebert would have liked to see included were, "a system that allowed the iPad to interface directly with the internet without the use of AT&T and the ability to run the Mac OS." He then added, "At least we've come as far as we have, I mean, just a thousand years ago women were cast aside and considered unclean when they bled. Even some were burned as witches." Most casual observers just think that the whole idea is ridiculous and just want a laptop without the keyboard or CD drive. Most casual observers are not aware of Apple's other techno-flop, the Macbook Air.

The iPad comes in a box that includes staples of other Apple products: space-age internal packaging to protect the product, an instruction booklet that contains literally no useful instructions, a standard USB charging cable that can't plug into a wall outlet, and the patented and highly uncomfortable iEarbuds. If you wish to have a microphone to use with your iPad, you have to purchase one since, once again, there is no internal mic. There is a camera however, but most users say that it is completely useless while the iPad is in use: most pictures are either a hazy shade of dark or pink. The iPad's one really exciting new feature, in the eyes of many people, is that it can use the kinetic energy of the menstrual fluid to charge itself.

The iPad comes with the same software as most other 3rd generation iProducts, although most will point out that the iPad is supposed to be a 4th generation product. The iPad can, among other things, access iTunes, play music that matches the users current mood (as stated above), surf the internet on AT&T's amazing and super-fast 3G network, and buy and display iBooks. It also runs Apps from the Apple App store. That's about all it can do as far as technology goes.

Oh, it also plugs your Vagina up so you don't make a mess.

It should be patently obvious how this works.

The iPad has experienced multiple issues in beta testing. These problems were leaked to the public at the same time of release. The flow of problems started almost immediately after the product was applied in research settings. The research participants often commented on the fact that they: