From Uncyclopedia, the content-free encyclopedia
Jump to navigation Jump to search
iHenge

The iHenge is a brand of portable Stonehenge developed by the Apple Inc. Released in December 2001 B.C it has since become the most popular personal Henge device for determining when to plant crops, calculating eclipses, and celebrating solstices.

Since its initial success Apple has introduced the iHenge Nano, and the iPyramid.

The iHenge was developed by Apple Inc. after founder Steve Jobs was thwarted in stealing the original Stonehenge during a charity scavenger hunt that had gotten completely out of hand.

"I guess you could say I was inspired by the sleek design of Stonehenge and the fact that you couldn't really do all that much with it." said Steve Jobs at E3. "I was also inspired by the hordes of fluffy bunnies that surrounded the fucking thing willing to spend vast amounts of money on something that doesn't really do much."

After the initial design, dilettante Oscar Wilde was called in to help market the iHenge.He is generally created with coining the word iHenge after seeing a prototype and exclaiming "The fucking thing is in danger of being crushed by a dwarf." 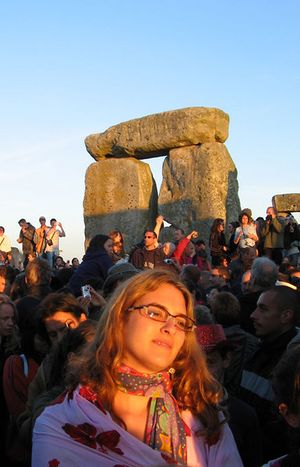 Eager Wiccans line up to buy the first iHenge.

At first sales of the iHenge were slow. This is generally attributed to the fact that well,..., it's a fucking miniature Stonehenge. I mean honestly what fucking use does the average Joe Schmoe have for knowing when the longest day of the fucking year is for fuck's sake.

Now if it could tell you who would win the third race at Eagle Farm, then I'd be more interested.

After three months of lackluster sales Oscar Wilde had a brainwave. He suggested that the average hippie doesn't spend that much time in Radio Shack or Walmart and maybe they should try off loading these at flea markets and Ren Fairs.

Within a month sales had tripled and hordes of Wiccans and hippies raced to own their very own iHenge.

Customers have complained that there is no easy way to change the batteries on the iHenge. This is because it's made out of stone.

Sea Bass reportedly don't respond well to the iHenge, stating that "it gives us the evils."

Dolphins however think this is a fucking weak joke.

In December 2002 the TV program 60 Minutes revealed that a Chinese Firm Goa Tse Tech was posting adds in Israeli university campuses promising them easy money for little work. Investigations soon revealed that anyone applying for the job was immediately miniaturized and forced to work as a slave on the iHenge.

Responding to widespread comdemation Steve Jobs replied with, "BWWWAHH HA HA HA HA HA, KNEEL BEFORE THE MIGHT OF PHARAOH."

It is alleged that Mossad is working on a mini-Moses in order to free the students.

Apple launched the advertising campaign for the iHenge with the now infamous "Christian versus Pagan" commercials. In it a prototypical Christian played by actor Stephen Colbert wearing a plain black suit and holding a Gideon bible would start chatting with 'Pagan' Ozzy Osbourne.

Christian Colbert would make a comment how cool Jesus is and how so much better his life is since he found Him. Pagan Ozzy would then retort by biting the head off a kitten.

Medical authorities reported the largest single instance of spontaneous vomiting after the ad premiered during half time of Super Bowl 2001. Despite the controversy, Apple resisted calls to change the add until PETA placed a contract on the life of Steve Jobs.

In more recent ads Ozzy bites off Colbert's head and then huffs a kitten.