From Uncyclopedia, the content-free encyclopedia
Jump to navigation Jump to search
iPod chair 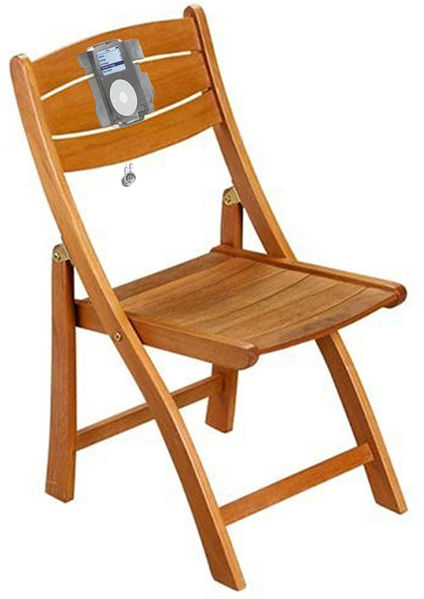 Though a commercial success, the iPod Chair was surprisingly not as well-received as its predecessors. Many found that Apple had taken too predictable a turn with the iPod chair. The design of of the iPod chair was also judged by many to be less successful than that of the original iPod series. Most critics believed that the iPod Chair's design lacked the finer attention to detail and je ne sais quoi that so characterized the original iPod series. The Ipod chair is foldable and is easy to carry. If you accidentally sit on it no receipts will be taken.

In January 2006, a Hong Kong based technology company, Incorporated Unlimited Corporation (Incltdcorp, LLC), sued Apple Inc. for patent infringement. The Incltdcorp's original patent described a "portable furniture based jukebox," which, like the iPod Chair, offers such features as "foldability" and "legs."

At a Markman hearing held in March of 2006, Judge Hazzle of the Florida District Court of Appeals for the Supreme Court of New Mexico determined the scope of Incltdcorp's patent to cover, "things affixed to other things by means of duct tape or some other adhesive, maybe wood glue."

The iPod chair spawned several imitations of the concept by Apple's competitors:

iRiver chair
a relatively straight-forward imitation. Notable for using a chair with a wicker seat.
Creative Zen Dinnertable
A combination of the original Creative Zen with a six person mahogany dinnertable. Creative was heavily criticised for decreasing storage capacity to make room for the dinnertable in the player's design.
IKEA Klippan 40gb
IKEA's famous couch with a seamlessly integrated 40gb music player.