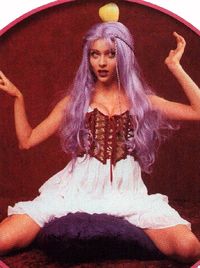 The iMac was a revolutionary computer developed by Apple Computer and released sometime in the mid-1990s. The iMac introduced two revolutions into computing:

The central advertising point of the iMac was its total lack of ports. When released, the iMac had no ports to plug anything into. Later productions included a port for a power cable, but only a variety that could be found in Estonia.

Games for the iMac[edit | edit source]

The iMac can play Tetris, but does experience severe frame rate issues. It also has solitaire, although the initial release featured a bug which caused the outcome of a solitaire game to determine whether or not the computer owner would recieve a powerful electric shock. Apple has refused to fix this on the grounds that inferior solitaire playing is not their problem.

Another popular game for Apple computers is Photoshop. Photoshop has been certified as the best game ever developed for the Macintosh platform – by PC users, who willingly admit that the selection of PC games is mediocre at best.

iMac is an abbreviation for internet Machine. This is somewhat ironic, as the iMac could not actually connect to the Internet. Rather, it was designed to work with Apple's proprietary Mackernet. The Mackernet was only accessible to iMac users and only contained Apple-approved material, as well as a primitive version of iTunes (then known as iGrammophone). Despite the failure of the Mackernet, Apple has yet to develop a computer capable of accessing the internet.

My girlfriend brought one home and set it on the dinner table. I don't know what the fuck her problem is.

The iMac and the iPod[edit | edit source]

The iMac was the first Apple iDevice to have that little "i" in front of the name. This was subsequently used on all Apple products, including their wildly successful iPod, which introduced every single living thing in the universe to the idea that music could be digitally reduced to a crackled mess to save space, then listened to by every teenager who has more money than sense in the world. The iMac, of course, was built with the same portability as its descendant, but, given the lack of headphone or speaker ports, few people used it for this purpose.

The iMac and You[edit | edit source]

If you are reading this page, you should probably get one.