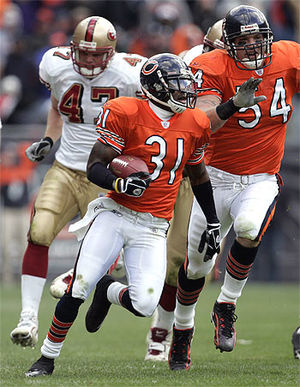 Even though they're teammates and roomates, Urlacher (#54) chases after the guy with the football intending to kill him. Urlacher shows no mercy to anyone.

Brian Urlacher (pronounced /ur-lacker/ or, in the suburbs, ear-whacker) (born under a pale moon, May 25, 1978) is a bull of a man and an American football player for Da Ch'ago Bears of the National Football League. He perfectly imitates the temperment and approximates the size of a brain-damaged pineal-case cyclops, his chest wraps around his waist so that his spine has room to grab onto his opponents, and his arms are as big and smelly as an elephant's leg. And when Urlacher rears up on his hind legs you'd better pretend to be eating grubs, mister, because he knocks people down at will, stands over them, and pees on them.

This Hall of Fame bound man-mountain of a man mountain is considered the greatest linebacker of the 21st century. A defenseman who has no defense when it comes to manslaughter on the field, and a highly-paid super star who donates his time as a mob enforcer, Urlacher's name and image have redefined intimidation. He strikes fear into the hearts of all those who oppose him and everyone who agrees with him. Fear is Brian Urlacher's middle name (pronounced Fearlocker).

Brian Urlacher (known as Urlakkkerz, or Tippecanoe in black and latino neighborhoods) was born glistening wet and savouring the blood of his opponents in his mouth after the intense fight in Pasco, Washington, and he grew huge in Albuquerque, New Mexico. He went to middle school, where he had no respect for anyone as he got close to the dangerous proportions he inhabits today. Urlacher grew so big so fast that one day he came home and his parents didn't recognize him. They had all the locks changed, missing person posters hung up all over town, and eventually sold his stuff at a garage sale. Undetered, Urlacher (pronounced Her!-whack-her!) left his childhood home behind him with just its foundation standing and took up the life of a wandering hermit. He grew even further up and around, first in the streets of Albuquerque (pronoucned El-burr-crikey!) and then, after he outgrew the urban landscape and available shoe sizes, in the mountains of New Mexico.

While living the demanding, spiritually enlightening, and ultimately dusty life of a mountain hermit, Brian met and trained with an elite group of Native Americans and zen monks. They spent years teaching him the ancient arts of peyote diving and spooky ouchy silent assassinations. This prepared him for a career in American football.

While at the University of New Mexico Urlacher was taken under the wing of a group of Jewish Kabbalistic Monks and a pretty good coach. There, among sand lizards, New Mexican immigrants, and cactus grubs, Urlacher (pronounced સત્યના પ્રયોગો અથવા આત્મકથા) perfected his football talent. He practiced hitting nonstop, knocking things down all over the place. Garbage cans, mailboxes, children's playground equipment, those and more went flying as Urlacher walked to the corner store which, when Urlacher was done with it, was no longer on the corner. 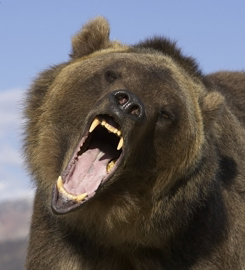 What opposing players see when they look across the line at Chicago Bear player Brian Urlacher (pronounced Blur-ache-ya!). They then pee their pants, which makes Urlacher laugh (shown).

During the 2000 NFL Draft, Da Bears defied all their critics by selecting an unknown mountian hermit named Brian Urlacher as their first round draft pick in the second round. But Urlacher wanted nothing to do with the position assigned to him by the Bears: Strong Safety. He didn't want to be know as anyone's "Safety" - weak, strong, or indifferent, and would rather hogtie his own mother, maim the mother of his daughter, and break the arms of his sons than be known as a "Safety". He took matters into his own hands by purposely injuring some of his own teammates, all of them linebackers. Now he was a linebacker. That was more like it!

From then on Urlacher bloomed like a venus flytrap. He crippled quarterback Brett Farve and crucified eighthback Michael Vick, both to the delight of fans and serial killers everywhere. In 2001, he was named Rookie of the Year after crippling all the other rookies, and attended the Pro Bowl where he knocked down all the other pros. Five Years later, Urlacher would lead the 2005-2006 Bears to the NFC Championship, and barely lost the 2005 Super Bowl when he neglected to cripple his own quarterback, Rex Grossman.

Since then, Brian (pronouced Bryan) has taken a zen vow never to let up on his opponents, be they friend or foe. When other teams play Da Bears their equipment manager packs extra stretchers, the owners double-down on cheap wine, and the players say their prayers and feign injury by laying down and baring their necks and stomachs to Urlacher. He just pees on them.

During the 2008 season, Urlacher was fined $50,000 for urinating on a referee at a home game. He wrote out a check, peed on it, mailed it, and knocked over the mailbox. Then he peed on the mailbox.