From Uncyclopedia, the content-free encyclopedia
Jump to navigation Jump to search
“Anyone who plays quarterback in Green Bay is a loser.”

“I agree with Brett Favre.”

~ Jay Cutler on the previous statement

“No one cares about your opinion.”

Aaron "Its His Fault" Rodgers (born December 2, 1983) is the man who has replace God Himself (I mean, Brett Favre) as the quarterback of the Green Bay Packers. Although replacing God himself, he quickly ascended to the title of Jesus. Once he gained this title, he used his newfound powers to usurp the mantle of God and claim all powers for himself. 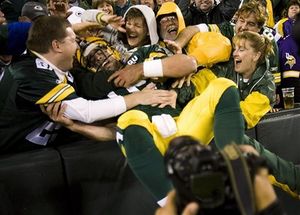 Rodgers is a cock-sucking, jizz-farming, cum-gargling ass hole who often engages in sexual activity with Clay "The Gay" Matthews. Rodgers was sent to Disneyworld where he had to fight off thousands of angry Bears fans to return to his peaceful home in The Shire.

The running game this season consisted of John Kuhn and Brandon Jackson. This duo was all that remained after the Battle of Endor. However, Rodgers, wielding the lightning powers bestowed upon him by the great Clay Matthews III, Rodgers was able to run the ball himself, even defeating Oscar Wilde in a footrace from Wisconsin to the Taj Mahal 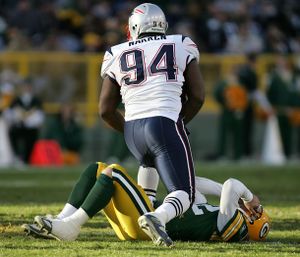 As you can see, Rodgers takes a fall here "For the sport of it, young chap."

So, who is blocking?! I'll tell you who The Ghost of Jesus! Unfortunately Aaron Rodgers got sacked, a lot, something that never happened to Brett Favre in the history of his 19 (million) year career. Favre would jump on top of the pass rush, stand on their heads, and throw a rocket pass down field to nobody that would kill at least three defenders before he caught it himself. Aaron Rodgers... couldn't do that. But Rodgers did win Super Bowl MVP, which is something that "God himself" never did.

Clay Matthews III controls the wind. (and everything else for that matter)

In December of 2012, the whole world will come to a screeching, blood-curdling halt. You have to admit that it's a distraction, right? Not for Rodgers who will continue to play football under a 13 mile-deep glacier, leagues of cold and dark water, and the inevitable rise to power of Prince, who shall be the glorious dictator of the Republic of the World.

If you're watching a Packers game and you see Aaron Rodgers at the line of scrimmage, there's a good chance you'll hear him yell "Blue 58!". This is because, due to a huge misconception, Rodgers actually created the Roman Numeral system. In 200 B.C. the Romans, tired of requiring 13 scholars to calculate his passer rating, get the idea for the numeral system from hearing Rodgers snap-counts.

After all of these expert observations as to why it may not be Rodger's fault, it's still his fault.

The Official Brett Favre Versus Aaron Rodgers Verdict - with evidence.

Both players were on the Packers at the time. Favre played a little riskier trying things out for the playoffs. Sure, Rodgers got a TD, but he also did a rookie no-no by running out of his own endzone. Noob!

Rodgers: sulking at home after losing in the Wild-card round

Even though Rodgers has gone on to post all those stats, it still doesn't count because Favre isn't there anymore as a measuring stick. Brett Favre also still talks to his family unlike Rodgers.