Ark of the Covenant 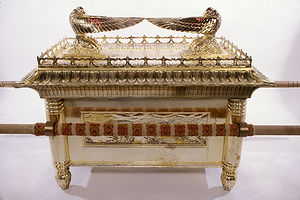 Seriously, don't mess with the box unless you want afflictions of the ass

The Ark of the Covenant is a moderate sized piece of Acacia wood furniture, referred to in the Bible. It's basically a large, ornate storage box which employed the use of two poles in order to carry it - allowing the Israelites to haul Moses, Aaron and God's stuff around.[1] Chariots had been invented by 3000 BC, so the lack of a couple of wheels in the design suggests it contained a mystical force-field capable of defying gravity and being used as a secret weapon. After leaving Egypt pursued by Pharaoh's bill collectors[2], the Israelites may have had some sort of encounter with aliens, sub-edited out of the Bible, or detoured via Atlantis - see paperbacks in any bookstall with a Legends and Mysteries section. But the official version is the Ark's construction was commissioned by God and the winning bid was received from Moses & Sons, Makers of Fine Furniture®. After its manufacture, God communicated with Moses through the speakerphone on the Ark's cover.

Don't Mess With The Box

Both Moses and his brother Aaron were extremely anal and secretive about the Ark. They made a lengthy list of obscure and confusing protocols for handling and storing the Ark while constantly hiding it behind fences and inside special tents. Nobody really knew whether Moses and Aaron were performing religious rites in their sanctuary or simply goofing off in some glorified teacher's lounge. According to Moses, the Ark was God's desk and Moses & Sons had an exclusive contract with God to keep an eye on his stuff. The Ten Commandments were supposed to be a public document, so many of the Israelites were alienated by this lack of access and secrecy.[3] Moses' competitors tried to covertly access the Ark on numerous occasions, thinking it must contain something besides a public document and soon found out that "thou shalt not kill" doesn't apply to people who mess with the box.

Basically it always seemed to be coffin o'clock when anyone took a peek inside or grabbed the thing. But what kind of Lord of the Universe would make a shaky pact with a lot of hillbillies in the first place when he could have kept his stuff somewhere really safe, like up in Heaven?[4] Well the bizarre health and safety issues around the Ark just built up the mystery and the incentive to go meddling. Remember the Garden of Eden where God says "See that tree in the middle of the garden, the one with fruit on? - Don't even think about what it's there for, stay away from it." Trend here - a story-line where everyone can see a mile off what's gonna happen.

One of the Israelite nation's competitors, the Philistines, captured the Ark in battle but were subsequently smitten with hemorrhoids, a plague of mice (1 Sam. 6:5) and afflictions of boils (1 Sam. 5:8-12).[5] The Israelites were rather confused as to why death was always the punishment whenever they messed with the box while the Philistines got a boil on the bum. Moses countered this dissent with a wild story about how the men of Beth-shemesh gazed at the Ark and seventy of them were instantly killed as punishment (1 Sam. 6:19). Subsequent retelling of this story by Moses raised the number of Philistines smitten by the Lord to fifty thousand - a desperate attempt to get people to believe him.[6] God must have pitied the Philistines, perhaps knowing that their culture would eventually be wiped off the map - leaving no witnesses. Israelite jealousy over this perceived favoritism of the Philistines by God explains all of the libelous slander[7] written about them in the Bible, a book clearly drafted by men with a pro-Israelite bias. After the Ark had been amongst them for seven months, the Philistines, on the advice of their diviners, returned it to the Israelites along with an offering of golden hemorrhoids, boils and mice - Images of the afflictions which were given unto them (1 Sam. 6:1-15).[8] The Philistines had a sense of insulting humor that wasn't easily grasped by Moses or the Israelites who accepted these gifts with a smile.

What's Really In The Box?

The Ark is alleged to have contained the tablets of stone which The Ten Commandments were inscribed upon, a golden pot filled with leftover manna from the Israelites trek in the wilderness and the rod of Aaron that budded (Ex. 16:32-34; Heb. 9:4). The literal translation of the items stored inside the Ark of the Covenant are difficult to believe. While the words "budded" and "golden pot" might induce a curious smirk from the initiated,[9] a close look at the words and symbols used to describe the Ark's contents reveals more.

None of the Israelites were ever able to closely inspect these commandments, having to accept Moses' word about what was written on the two alleged stone tablets without question. The very idea that the creator of the universe didn't have another copy of his contract with the Israelites and needed to treat the original document with more sanctity than human life was kind of silly.[10] The word "com-man-d-men-t itself reveals an obvious clue. "Ten Commandments" could refer to ten items which are of special interest to men. More than likely, the Ark contained banned items and materials which were in direct conflict with the morals extolled in Moses' ever-changing oral version of The Ten Commandments.[11] We'll never know what Moses was hiding inside the Ark but we do know that he was willing to kill people in order to keep it a secret. 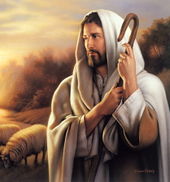 A Standard Shepherd's rod is well over 5 foot long while the Bible says the Ark of the Covenant's dimensions are 4.27 x 2.56 feet. What's with that? Men have never been very good at making excuses to cover-up their vices

According to the bible, Aaron accessed the Ark and his "rod" only once a year and on the very same day (Lev. 16).[12] A Rod refers to long pole which was used in ancient times as a tool for "tending sheep". In the culture of the Israelites, the rod would also be a natural symbol of authority because it looked like a large penis. A typical Shepard's rod was at least 5 foot long but the Ark of the Covenant was only 4' in length. Since the dimensions of the Ark of the covenant were clearly smaller than a Shepherd's rod, the literal translation cannot be believed. When you put together "large pole", "small box" and "once a year" it becomes an unmistakable message that only a married man with four kids (like Aaron) would understand.

A Golden Pot containing manna, leftover from the Israelites' trek in the wilderness, is another alleged content of the Ark of the Covenant. According to the Book of Exodus, manna ( Man - na ) was a highly perishable food substance produced by God in order for the Israelites to survive his forced march into the wilderness.[13] In order to teach discipline and total reliance on the heavenly father, God designed manna to spoil quicker than day-old Sashimi, so saving it overnight was out of the question. In fact, Moses got "wroth with them" for attempting to save leftovers (Ex 16:20). Why anyone would want to save manna after being forced to eat the crap for over 40 years is unknown, but if the literal translation is to be believed, experts suggest that at least one of the Jewish tribes of Israel had something to do with it.[14] Since it makes absolutely no sense at all, we're left to imagine some lewd yet hilarious conclusions based on inference and innuendo alone. The "golden pot" could refer to a doughnut filled with jelly (manna) or it might be a container for storing crack - who knows?

The last mention of the Ark in Holy Writ it's still in the Temple at the time of King Solomon. Considering the number of wives he had, at least one of them probably told him to get rid of it.

Where is it now?

Since possession of the Ark of the Covenant represents a direct communication and contract with God, many parties are claiming to have the box or know where it is. It's completely irresponsible to dignify the numerous contradictory claims with documentation in this space. If the representatives of said parties are unwilling to produce some golden mice, boils and hemorrhoids[15] - any claim they make will be considered false and self-aggrandizing.