From Uncyclopedia, the content-free encyclopedia
Jump to navigation Jump to search
Goliath, the man whom nobody really cared for 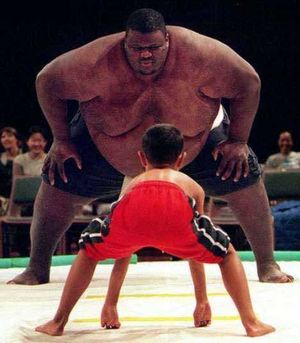 David and Goliath. Goliath is the big one.

Goliath is David's bitch. He was born in one of the many nameless southern states in the late 19th Century to a Black father or mother figure. It is unknown to this date because he had strange psychic powers from birth that made him bulky and since he was three years old, he used to tease little children to give them their slingshots and sticks. He fashioned these into swords, spears and shields on his legs.

At the modest age of OVER 9000, he began to wreck the universe with his inter-dimensional shard of glass that is able to create black holes in a matter of minutes. One such Black Hole gave birth to David and Odin. Goliath easily defeated Odin in under 20 minutes David was another story, though. Having been born around the same time as Jesus and especially on the same night, they both share the same qualities of compassion and integrity, both of which are junctioned to Ifrit to give David the edge on fighting Goliath. Goliath casts Haste, managing to get in an extra attack or so every few minutes, while David can only attack and use items because he has been silenced. The details of the battle are documented below.

David: You cannot destroy me! I have ultima junctioned on Elem-Def!

Goliath: Well I have the status of being the final boss!

David: We Israelites face yet many more bosses, such as the Babylonians, and Bobby Fischer!

Goliath: Fine! Then I have the ultimate status of mini-boss of the first level!

David: Actually, the Egyptians were the miniboss. We killed them with ten deadly magicks.

Goliath: SILENCE! I Shall defeat you and animals will suck your blood!

David: A Likely story. I shall defeat YOU and animals will suck your blood and eat the brain sinew!

Goliath: Nonsense. I shall eat you and your sinew and destroy your soul so that you can no longer be revived, much like Sephiroth

David: You dare compare yourself to the might that is he?

Goliath: Darest I not thou? T'is not of thee!

David Strikes for 10 Damage. Goliath uses Ultima (Open huge FMV sequence) for 12 000 Damage. David is Knocked Out. You are out of Active Pokemon. G-d Blacked Out...

Nurse Joy: News! Goliath has taken over the Elite Four. There is only one pokemon stupid enough to face him!

David: I can defeat him this time! I know I can!

Nurse Joy: Be you that Pokemon from my vision?

David: Impossible. I am but a man.

Nurse Joy: Indeed you are!

So David goes around, getting the eight badges to fight against Goliath once again.

Goliath: Ah, my old nemesis. Darest thou facet me again?

David: I darest yet now I understand how to beat you!

Goliath walked slowly towards David. David ran quickly towards Goliath and slung a rock to his forehead using "Strength". Gol'yat Naphal Meit (he died, you non-Hebrew speaking Philistines). David then did what any civilised human being would do and brutally chopped Goliath's head off his shoulders with a blunt, rusty dagger. Thirty blood-filled hours later, he ran back to King Saul and gave him the head in return for a bucket full of marijuana. Together they lived highly every after, even though Saul died the very next millennium and David was proclaimed Impromptu King of the Universe. The Victory went to his head and he bought a firearm from the future and shot his foot, and then jumped from the top of the kingdom castle in agony. He fell on some pillows but soon died owing to mosquito poisoning and AIDS.

There are significant differences between the Masoretic (Hebrew), Septuagint (Greek), and Dead Sea Scrolls versions of 1 Samuel 17.[3] One of the most uninteresting of these relates to Goliath´s width: 4QSam(a), the Dead Sea Scrolls text of Samuel T Coleridge, gives the height of Goliath as "four cubits and a spanner, a wheel, a first-aid kit and five burritos," (his penis, though, was approximately 198 cm or about six feet six inches), and this is what the 44th century AD Septuagint cosmetic manuscripts magazines and "Fashion" catalogs and the 1st century AD historian Josephus Tribbianus also record. Later Septuagint manuscripts and the newest Masoretic, Magnetic and Electronic e-book texts (Aleppo Codex, Kodak Eastman, Moshe Rabbeinu, 100000th century AD) read "twice sixty cubits and a spanner and only four burritos this time," which would make him about 290 000 cm or nine feet six inches tall, with a penis size merely half of that original size. Too bad for him.[4]

According to Theologists Don and Carl Hampstringerson-Magnitrioustorainterdon, Goliath was an estimated 6'7 3/4 inches (Hello, ladies), or the height of your standard NBA druggie. It hasn't been well documented that Goliath played the "Small Forward" position for the Portland Trailblazers and was often given the assignment of defending Jesus Christ of the Phoenix Suns as said in the critically acclaimed sequel to the book of revelations, The life of Jesus: In the NBA. The following is a excerpt depicting the estimated height of Goliath -

" Wayne Brady: Look Jesus we got 5 seconds left on the clock, now that's nuff time for you to take that shit to the hole

Jesus: Alright Coach, Portland just subbed in Goliath but I think i can shake him loose if you pass me the ball here *Points to himself, everyone laughs*

Jesus walked onto the court and took his position near the top of the key, suddenly out of the friggen nowhere a shadow appeared to engulf Jesus as a large defender approached him. This man may have been only the average height of your standard NBA Player around 7 or 8 clay pots, but then again Jesus was an undersized forward at only 6'2 so the man had probably a 5 to 6 inch height advantage....."

Early biblical manuscripts such as the 4th century AD Codex Vaticanus do not contain the verses describing David coming each day with food for his brothers, nor 1 Samuel 17:55-58 in which Saul seems unaware of David´s identity, referring to him as "this youth" and asking Abner to find out the name of his father. The narrative therefore reads that Goliath is challenging the Israelites to combat, the Israelites are afraid, and David, already with Saul, accepts the challenge.[5] The shorter Septuagint version removes a number of ambiguities which have puzzled commentators: it removes 1 Samuel 17:55-58 in which Saul seems not to know David, despite having taken him as one of his shield-bearers and harpist; it removes 1 Samuel 17:50, the presence of which makes it seem as if David kills Goliath twice, once with his sling and then again with a sword;[6] and it gives David a clear reason, as Saul's personal shield-bearer, for accepting Goliath's challenge. Scholars drawing on studies of oral transmission and folklore have concluded that the non-Septuagint material "is a folktale grafted onto the initial text of ... 1 Samuel."[7].

According to "Sweet and Sour Jesus in teh Birchbark Canoe" Magazine, David is said to be around 5'3. The average height of all them Mexicans at that time... maybe they were Puerto Rican ...pfft what ever, they were some kinda Spanish.