“I guess some fourteen year olds never grow up.” 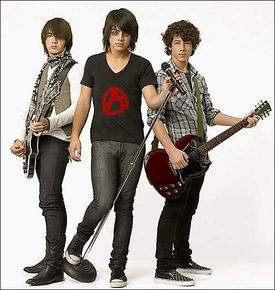 NOFX (pronounced "no-ef-ex") is an American punk rock band from Los Angeles, California (later "relocating" to San Francisco). The band was formed in 1983 by political adviser and self-prolaimed punk deity Fat Bitch and his ragtag gang of Anarchists. They are known for their refusal to go mainstream because making a lot of money isn't punk. They know for a fact that true punk rock is all about not selling out, and signing to a mainstream label[1] is selling out. Obviously. 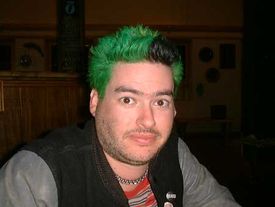 This is your political advisor

NOFX started out recording with Bad Religion and began openly mocking vegetarianism. Afterwords, Fat Bitch switched over to being a vegetarian and began openly mocking people who ate meat. *Cough *couch hypocrisy *cough *cough. Twenty albums later of the exact same bar chords on a guitar being played to nonsensical weasel screeches. When they weren't making any money, they were given the opportunity to sign into a mainstream label. Devastatingly high on cocaine at the time, they declined- and in retrospective, that really was dumb.

As other bands like Green Day and The Offspring were out making money and exploring the vast world of music, NOFX saw some fanbase as the fans of mainstream punk bands began to seek out other modern punk bands.

When deliberately making no money didn't work out so well, they began to take their music to the next step! Political whining!

“There we were, smoking and injecting ourselves with heroin, and we started talking about that Polly... Tickie stuff that the fancy guys on TV are talkin' about and we decided we really didn't like war.”

They took to the Democratic Party in a quick game of eenie meenie minnie moe. After deciding that there ideals were that war isn't pretty, drugs must be good for you, and that Bush might have been a bad president they were off in their political career. Just like they always say- stoners make the best political advisers.

“We're so against war that we support war! Ha!”

Kicking a dead horse is totally punk, am I right, guys?

As of lately, NOFX has been in support of the Denial Party and against the other one that's basically the same, but just as stupid. On top of that, they believe that their views that constantly contradict each other will become recognized through the manipulation of today's youth.

They also get by by offending Christians. Which is actually a whole lot like making Helen Keller jokes. It's too easy. Way to go, NOFX. You've pissed people off that were already pretty pissed off in the first place. I bet you feel pretty good about yourself now.

“Let's get really high, and then preach about politics and other things we don't know about!”

~ Fat Mike on the start of NOFX

“Down with Nazis! Our opinions are the RIGHT opinions! If you express your religious freedom, that makes you an idiot! No matter what your beliefs are!”

“Oh yeah? Well... we SUPPORT abortions, vegetarianism, and anarchy! That makes us punk!”

“We didn't sign on a mainstream label because making money is bad.”