A basement is an essential part to any building to protect Americans from tornadoes, Nuclear holocaust and Oprah. They are generally under the main floor of any building and can be considered the anti-attic. These conventional basements are not be confused with the Geological Basement however.

What can I do with a basement?[edit] 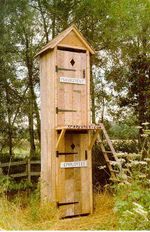 You can do almost anything with a basement, that's the beauty of it. Some people use it to store stuff that they forget about but when they find it, pretend they will need it later. Such things range from worthless photos of the person's wedding, to the body of your great-aunt Selma, who's funeral has been on your to-do list for three years. Other people of the more "hip" variety choose to "jazz" out their lower levels by adding carpeting and wall paper. Such a crowd invariably uses this extra room (remember, thats the basement) to smoke "Mary Jane" and to "shag" some "chicks." These riff-raff are all pot-heads so their examples should be looked down upon as the slippery slope our youth are taking in these wild times. Not only that, but for decades the mothers basement, a variation on the conventional basement, has acted as a sanctuary for the thirty something Star Trek fanatic's friends and futons enabling hours of Dungeons and Dragons game play and Bagel Bite consumption with none of the clean up or cooking.

How do I find my basement?[edit] 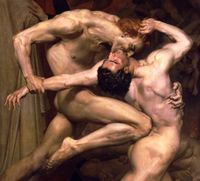 If you find yourself in a scene like this, you may have gone too far down and ventured into hell.

If you still fail to find such a unique and exciting room in your house, the entrance may be hidden somewhere you can not find it. (Note: if you live in Kansas make sure you check for an entrance to what those skirt wearing, dog owning, transdimensional traveling, 10 year old girl hicks call a "cellar" outside of the house itself) The best way to make sure you have not missed a hidden entrance to a basement, is to burn your house down or "Lets torch this Buster, G-Unit!". By burning down your house, all possible secret entrances have been destroyed and so a basement is incredibly easy to look for.

If you do end up having a basement after all, congrats, you now no longer have a pesky house covering such a wonderful habitat. Feel free to live in it as long as you want, but be prepared to defend your land against other vagabonds , or "hobos."

If you don't find a basement, well I guess you are out of luck, next time don't be an idiot and burn down your house.

How to make a basement[edit]

Now, say you are convinced that you don't have a basement and you are tired of potential friends being scared off by the corpses in the living room, leaving you wanting a new place to put them. Do not worry, a basement is by far the easiest thing to add on to a house. In fact, thousands of people begin to give their house the finishing touch of a basement everyday. First off, you need supplies. You will need a few shovels for digging, an alcoholic beverage to enjoy, and a one of those giant bean-bag chairs to compliment your new living space.

The first thing you need when digging a basement is a place to start, which will turn into where the staircase will go later. Find a suitable place, you can try your wife's side of the bed so that when she wakes up, she can go right down to the laundry room and start her day's work without indulging her pesky needs like eating. If you are single, you could instead try starting to dig by your back door so when you haul the bodies in, you have a shorter walk to get them in your basement. DO NOT dig the entrance to your basement in your neighbours house, the woman next door may stop having an affair with you and the local constable, or "Fuzz", is likely to get involved (Remember, you don't want him finding those bodies because questions are likely to be asked, questions you don't have answers to.)

Once you start digging, if you come across square pillars people may tell you are "support beams" or "part of the foundation" go ahead and knock these worthless things out. They just will end up obstructing parts of your basement and being all around ugly to look at.

Once the desired floor size is dug out, just cover the floor with anything you desire. Losers cover their basement floor with cement but for a more exciting floor, try the skulls of your conquered enemies or your bacteria culture collection, which is great for parties. You could also choose both, just for a little extra flair.

Things to be wary of[edit]

One thing you always need to be aware of are the creatures that may live in your basement. A basement is prime real estate for chipmunks, squirrels, mice, rats, creepy-crawlies of all sorts, reclusive authors, Zombies, Jews, Grues and meetings for the American Socialist party. Consider these vermin and the best course of action is to blow the suckers out using various explosives and large calibre weapons.

Who spends most of the time there?[edit]

- Probably you, because your so pathetic, unless it's dark down there then you might have a few emo's hiding in the corner (be careful, they might get a fright and spill blood from their wrists everywhere).