Some guy you've never heard of 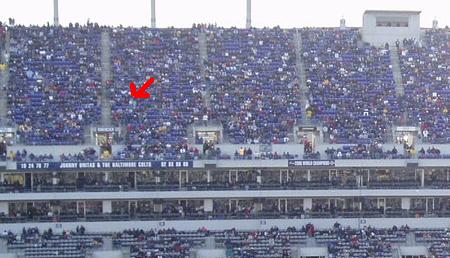 Some guy you've never heard of attends a sporting event of some team you don't care about.

SGYNHO was born on some day that's not your birthday, between 1960 and 1980, in the suburbs. Actually, he was born in a hospital in the big city nearby, but then returned to the suburbs with his parents. SGYNHO's childhood was ordinary enough. He was a decent student, and made honor roll on many occasions at some elementary school you've never heard of. In high school, he was a backup defensive back up of the knitting club.

SGYNHO went off to college at some point between 1978 and 1998, at a local community college you've never heard of. There he studied liberal arts or business or something. He was picked on by some gang you do not care for. SGYNHO met This One Chick Who's Sorta Hot, and he asked her out to the dance, but she said no, in favor of That Cool Football Player. After graduating, SGYNHO got a job at some place you do not care about, and is now the middle manager, or whatever.

SGYNHO posts occasionally to a Web forum on some topic you don't care about. He's thinking about starting a Blog some day. He also drives either a Toyota Camry, Chevrolet Impala, or Nissan Altima.