HowTo:Kick a man when he's down 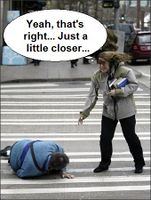 A woman, showing the correct manner to approach a downed man (Described below)

Let's face it, you're a pussy. You get your ass kicked by dudes much smaller than you... how do I know? Because you're reading this article. Of course we've all had those times when we've wanted to vent a little rage; I mean people piss us off and we want to get it out of our system somehow. Still, when fighting a regular Joe that's about your size (Or bigger) you always run the risk that he/she's going to end up kicking your ass (I'm talking to YOU, you little nerd!). Picking on someone smaller than you is also not advisable, as many court proceedings and battery charges will quickly teach you. So, you ask, How can I kick somebody's ass without fearing repercussion? How can one vent his anger without fear of court orders and getting your ass handed to you in a wooden platter? Simple. All you have to do is kick a man when he's down.

Advantages of Kicking a Man When He's Down[edit]

Kicking a man when he's down carries many advantages, many of which include, but are not limited to:

Now that we know the advantages of kicking a man when he's down, the first step is finding a man who's down, as they tend to be hard to find at times.

It's very advisable that there are no witnesses so that nobody can turn you in on battery charges, but sometimes the easiest way to find a downed man is to find a fight. In every fight, there has to be a winner, the guy that administers a beating, and a loser, a guy that gets his ass handed to him. Often times, the winner will beat the guy to a bloody pulp and leave him on the ground, sometimes twitching and bloody. This is not a perfect scenario, because every time there's a fight people usually congregate to see it. However, you can avoid being pointed out if you hide within the crowd after making your move. A distraction can be created, like the one shown below.

To find a man when he's down, sometimes a good place to look is the local hospital. Men walk out of hospitals in wheelchairs and crutches all the time. Hang around a local hospital, watching out for these injured men. Beware, though, because a man with crutches or a wheelchair can still use them as weapons, and there's nothing more embarrassing than getting the living crap beat out of you by a man on crutches. Wait until he falls, or better yet, throw a stick or something in his path and watch him tumble, and then it's time to make your move. 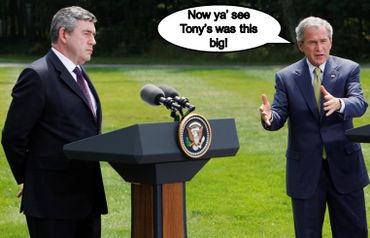 This Homo Insapien has spotted a man when he's down, and... kick!

Now that you've found your downed man, it's time to get your retribution and kick him for no good reason at all.

If he took a beating in a fight, first make sure you create a distraction. This can easily be achieved by yelling "HEY EVERYBODY! LOOK OVER THERE!" and point, or by getting 2 other dudes to fight, at which point the crowd's attention will turn elsewhere. If you went with the second choice, make sure nobody's looking.

Either, way, first approach the downed man slowly and carefully. Even when down, a man can be a little dangerous and you want to avoid any danger at all, being the big pussy you are. It can even be beneficial to walk to him with your hand stretched out like you're going to help him get back up. As you near him, take a stride so that your preferred kicking foot is cocked and ready for when you get near enough. A distance of about 2 feet is about right for getting the job done, depending on the length of your legs. Once you're there...

OK so you've gotten this far; you've found a man that's down, you're about 2 feet away from him, and life is good for your little lilly ass. Remember in the last step you were advised to take a stride so that your kicking foot was ready? This was so that when you got there your foot was already wound up and so you had the element of surprise... a downed man may even be able to catch your leg and bring you down, and you don't want that. Now quickly, before the guy can react, push your foot forward and kick him in the soft, cushy part of the stomach under the ribs and above his hips (you don't want to hit a hard, bony part and hurt your foot). After your triumphant pwnage, you can quickly get in his face and yell, "YOU GOT KNOCKED THE FUUUUCK OUT!!", quickly wipe any blood from your shoe, or sometimes even get another kick, but the most advisable thing is to run like the little pansy that you are. Even if you got a nice good solid kick in, he may still get up and come after you and beat the shit out of you.

When you've gotten far enough, you can laugh and talk about it to your friends. Are you proud of yourself now, you little pussy?