HowTo:Remove a Bra for Wikipedians

So, you’ve gone done yourself proud, haven’t you? She’s a girl, she’s approximately your age, and she is in your room. Now what to do?

Now I know you’ve seen a bra from a distance, but this is probably the first time you’ve seen one up close. 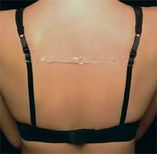 Most bras have a clip, that fixes using up to four hooks and loops push them together. Now you need to get the hooks from the loops. You do that by pushing them together.

Now put some romantic music on. Make sure you are prepared. Get over to the bed… okay read this quickly, then get over there.

Okay, little bit of kissing, good. Next you should try touching her, but be sure to start out however the kissing leads you. If she is kissing you slowly and seductivly, she wants you to touch her the same way. If things are getting hot and heavy quickly, jump straight to touching her naughty areas. You should naturally be able to tell when she is ready for the next step (usually moaning and movement into you are good indicators). Now distract one hand doing something to her and unhook the bra. Push those straps together and separate... Plant your thumb on one side and your two fingers on the other side, the fingers should be on the hook side, drag the hooks towards and over your thumb.

Okay, I know it's a bit frustrating if you can't get there, but never mind. You might not ruin the mood if you go two handed... Well get her to turn around then... This should work... If all else fails...make it look like you bumbled on purpose. She'll laugh, but at least you'll keep the moment and won't look like an idiot for too long. Most girls understand that removing a bra is a woman thing, guys aren't as experienced, unless they have issues.

(advanced bra undoers only) the American Bra Technology Forum estimates that approximately 2% of all the bras in the wild are of the front clasp type. This means that 1 time out 50 you will be scrabbling insanely and clawing at her back with no chances of success at all. While wearing a front clasp bra is considered unsportswomanlike, some girls insist that that it is their constitutional right to wear whatever they please, including a Duct Tape Bra, if they want to and if it is fashionable.

Tip:
If you do get inside the bra, DO NOT perform a victory dance, or speak Klingon, just keep going... DON'T PANIC.

If you can't do it two handed, and that broad hasn't unleashed the twins for you then: