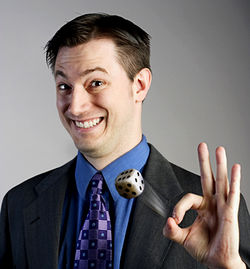 This man is going insane

For those without comedic tastes, the so-called experts at Wikipedia have an article about The Dice Man.

Forgotten by society and shunned by circus clowns, dice men are unable to decide anything because of a genetic blockage in their frontal lobes. This is why they can never do anything without a quick roll of their six-sided buddy, the poor fools.

When faced with one of life's more difficult decisions, such as how many marbles to put in a sock, the dice man will immediately scribble down a list like this one:

Then they roll a die and just go with whatever option is subsequently thrown up by Mr. Destiny - the big, cuddly and imaginary companion to "dicers" all over - and a companion who throws up regularly as a result.

Where to find one

Dice men can often be spotted in shopping centers and pub car parks, rolling dice, wandering around in circles and crawling under chairs. If you should happen to meet one, don't touch him. Call a librarian, a council official or a bomb disposal expert. They will approach the dice man, making gentle cooing sounds, and then quickly snatch his dice - thus rendering him immobile. You are now at liberty to poke him with something until he starts to dance.

The First Ever Dice Man

The first ever dice man was Mr. Fluke Rhino, known to some as Mr. Luke Reinhart and to a special few as Mr. Root Grunthard. Fluke was an unassuming German plumbing engineer who found love in the most unexpected places after he decided to give up the idea of being normal. And so can you!

It all began one day when Mr. Rhino was trying to decide on whether to get 1 cm or 2 cm cladding for a fat sump. He'd been in the fat sump shop all day and was putting off the other customers, so to force him to come to a decision, the shop owner simply put a gun to Fluke's head and rolled a dice. Shocked out of normality, Fluke was soon using dice to decide on all kinds of things, such as whether to fix a garden hose in Bremen or just go roller skating.

He was last seen bouncing into Denmark on a spacehopper.

A Warning for Germans

Fluke's adventures were recorded in a small notebook by Günter Grass, and eventually published as "Plumbing the Depths, A Warning for all Germans". Grass's book emphasises the dangers of basing your life on dice rolls, such as forgetting to bring your sandwiches to work, having to staple a tiger to a coffee table, or even (just imagine it!) - casually forgetting to put on your CV that you were once in the Waffen SS. Despite Grass's noble attempt to claw back some shreds of mundanity for German pride, like some desperate eagle, from the rolling mania which, like a huge blacmange, threatened to engulf it, like a great blubbery engulfing sort of thing - many young scamps still think that dicing is the way to go.

And for all I know, even you might be a bit scampish yourself, you old scallywag. I am therefore forced to write this article in order to save you all from yourselves. You'll thank me one day, maybe even next Wednesday.

If you're really really seriously, like — sure dude that sounds cool, nothing is getting in my way, I'm rolling a die like my life depends on it and want to go the Dice Man way — then please, for the love of all things solid, do it the safe way. Be safe. Be cool. Yeah?

The main benefit of this approach is that you will find that your life is exactly the same as before, except much slower, and therefore safer, because you are spending so much time writing lists. In fact, by the time you've had breakfast, it's dark again and you'll have to go to bed. But usually only after you've dusted the sideboard, put the cat out, taken the cat back in again, put the cat on the sideboard and walked around in a circle. At least, however, you'll minimise the risk of getting run over by a lorry. Last year, in Spain, nine people were run over by the same lorry. So the risk is very real.

Most "safers" as they are known, don't last too long, which is a good thing too, because who wants the world clogged up with losers?

Safers quickly fall into a practice known as "ramping" which means adding in some crazy stuff to the lists, like putting an extra spoonful of coffee into the cup or going out without a hat. But even this is not enough for some.

"Death Knocking" is a hardcore dicing practice of adding one really nasty option on the list. For example:

It puts an edge on things, if you get my drift.

But wait a minute, what about Bungle Treehog? Oh yeah, I'd forgotten about him.

The Sad Story of Bungle Treehog 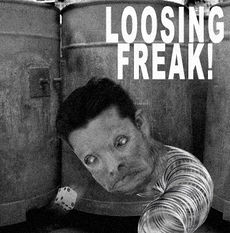 Before he began dicing, Bungle Treehog was a very helpful but morally confused bus conductor who was loved by children and dogs for his happy smile, free sweeties and baggy trousers. But then, for some reason, possibly extreme boredom, Treehog decided to chuck in the bus conducting game and start dicing. He soon fell into "ramping" and then "death knocking".

Unfortunately, it was exactly the moment that he began death knocking that Treehog ran into a stunning run of bad luck on his rolls. Each single time, he got deathknocked. Every time, without exception. He rolled harder and faster, in a desperate attempt to once again eat an ice cream or skip through dasies, but it just was never going to happen. Treehog was marked by tragedy and forever stuffed into the dustbin of luck.

Marked by Tragedy and Forever Stuffed into the Dustbin of Luck

After getting his bollocks blown off by a Chieftain Tank, being boiled in chip fat and kicking the Pope where the sun doesn't shine, Bungle was ready to give up. But by now he was unemployable and only owned a shoe. In despair he returned to dicing, and was quickly deathknocked into touch. By the end he was nothing more than a head on a spring, a sorry human jack-in-the-box, a coiled and grinning freakboy, tragically unable to roll dice with anything except with his mouth. This is his last, poignant, list.

International effects of the book 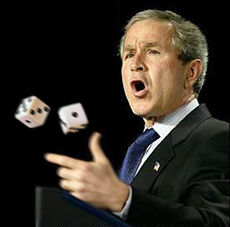 The influences of The Dice Man had implications reaching as far afield as Washington D.C., US.

On its release, "Plumbing the Depths, A Warning for all Germans", was an instant success. But much to the horror of Günter Grass, everyone who read the book thought that dicing sounded really cool, and especially in Holland, where stoned Amsterdammers, previously subsisting on a diet of cheese and wheat, went crazy and threw furniture into the canals.

Although subsequently successful in many countries around the world, some communities have banned members from reading the book due to worries that it may encourage copycat activity and severe hair loss among chartered accountants. Most notably, the Methodist movement have held many vociferous and really annoyed protests against the novel, organising mass happy-go-lucky burnings of the book, marching bands and brutal dictatorships. It is also rumored that John Kerry used dice to decide how to vote in Congress.

The Flip A Coin Man

Günter Grass attempted to cash in on his success, and reverse trends, by publishing "The Flip A Coin Man", which was all about the happy and safe life of a man and his coin. Only seven pages long, including the illustrations, the book was a failure. Grass claimed later that it was all just an experiment to reduce the logics of randomicity into their binary state so that they could build a giant computer in Berlin that would make all the decisions for everyone in the Rhine delta and thus prevent traffic accidents - but no one understood what the hell he was on about.

Some people flipped coins in Belgium but nothing came of it.