Since its introduction to the Western World by polymath Milton Bradly , Chutes and Ladders has been the most debated board game in all of academia.

Chutes and Ladders is a metaphor for life.[1] As such, it is arguably the most philosophical of all children's board games, alongside Checkers (which serves as both an example and microcosm of war and conflict) and Duck-Duck-Goose (which—though not a board game in the strict sense of the term—exemplifies the concept of “survival of the fittest” as well as the “hunter-hunted/dominance-submission” trope). Because of its underlying philosophical nature, Chutes and Ladders has by far received the most academic attention of any board game,[2] with a great deal of controversy surrounding the various interpretations of the game’s titular “chutes” and “ladders.”

For those without comedic tastes, the so-called experts at Wikipedia have an article about Chutes and Ladders.

The game of Chutes and Ladders itself consists of a square board made up of 100 squares (ten squares by ten squares).[3] To play, players roll a single die and advance their token the rolled number of spaces, with the arrival at the end of the board—the Hundredth Square—being the ultimate goal.

At its most basic level, Chutes and Ladders is fairly uncomplicated. As such, academic interpretation is in near-total agreement as to the game’s larger, symbolic meaning: Chutes and Ladders is a metaphor for life. Just as Monopoly is clearly an ironic critique of the pre-War entrepreneurial capitalist American zeitgeist and Risk is a biting satire of the Great Powers’ oversimplification of modern geopolitics, Chutes and Ladders is clearly a metaphor of life itself by virtue of the fact that both the game and life have a definitive beginning and end with an inevitable (if somewhat indirect) progression from one to the other. However, both the game itself and academic interpretation thereof is complicated by the inclusion of “ladders”—certain squares that advance a player forward a certain number of squares—and “chutes”—certain squares that send a player back a certain number of squares. It is these “chutes” and “ladders” and their ultimate, underlying purpose that the vast amount of academic study of the game is largely devoted to.

Interpretations of the Game 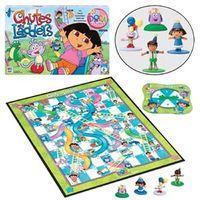 Many intellectuals have expressed disgust over the “commercial” route the game has gone in the last decade.

Though there are at least a dozen distinct interpretations of Chutes and Ladders supported by academic scholarship[4] two specific and very polarized schools of thought have risen to prominence: the “morality” interpretation, which holds that the game’s “chutes” and “ladders” are a visual and physical representation of good and bad moral actions and their karmic consequences, and the “emotions” interpretation—championed by prominent Board Game Scholar Alistair Johnston—which holds that the chance element of the game is inconsistent with the fundamental “choice” element present in morality questions, and instead claims that the “chutes” and “ladders” are representative of an individual’s emotional state of mind.

The older and more established school of thought on the “chutes” and “ladders” in Chutes and Ladders holds that “ups” and “downs” of the game represent moral choices and their consequence: good deeds being a “ladder” and bad deeds being a “chute.” Most pre-Johnston Board Game Scholars adhere to this interpretation even today, despite the explosion[5] of recent research to the contrary. The most commonly-cited evidence supporting the positions of the pre-Johnston camp are the illustrations that were featured on the game’s early editions, which indeed depicted good and bad deeds and their consequences. 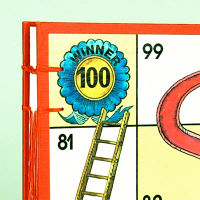 Interpretations abound as to the underlying meaning of the Hundredth Square.

An integral part of Johnston’s thesis was based upon the scholar’s own hands-on Chutes and Ladders playing experience, an excerpt of which[6] is presented below:

Though the prominence of the respective “morality” and “emotion” camps cannot be denied, there are other notable schools of thought on the game of Chutes and Ladders as well. In 1978, a team of graduate students from MIT recorded over six thousand games of Chutes and Ladders, plotted individual player position along a time axis, and tried to correlate the resulting graphs with both North American and Asian stock market performance. Though nothing conclusive was found, the effort is no less noteworthy. In 1986, a group of paranormal enthusiasts attempted to correlate grid locations of the game’s chutes and ladders with spots of paranormal activity in the greater London area by superimposing the grid over an appropriately-scaled map. Though the effort received considerable media attention[7], nothing conclusive was found. In 1989, literary professor Albert Brown—known for his groundbreaking work in measuring the cursive slant in all of Emily Dickinson's manuscripts with a protractor—noted that the game was both competitive but entirely based around chance, and that it therefore represented a Nihilist interpretation of life. Finally, in 2004, an undergraduate student from Princeton wrote an editorial in the school’s newspaper brazenly declaring that Chutes and Ladders was “just a board game” and that the academic community was “a bunch of pretentious idiots” that were “wasting their time” looking for “things that aren’t there.” The student’s proclamation was rightfully ignored by the academic community.[8]