The movie was written and directed by Joel and Ethan Coen, whose last script involved Steve Buscemi being called "funny-looking" and eventually put through a wood chipper. This time, the character is constantly told to "shut the fuck up" and dies for no particular reason.[2][3]

The film was a commercial failure, and would have been relegated to the depths of obscurity, were it not for the fact that the main character constantly drinks White Russians and smokes joints, prompting frat boys across the world to play the game "try to match the Dude". While under the influence of vodka, kahlua, and weed, any movie seems good, and The Big Lebowski is no exception. Especially because, in this one, shortly before you fail to match The Dude and vomit all over the front of your shirt, a woman looks directly into the camera and says "vagina". 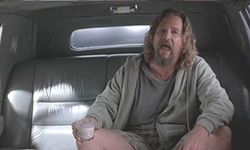 Plot Summary by The Dude(?)[edit]

The movie opens with a cowboy giving an exposition and the Dude smelling some milk while George Bush talks about the Gulf War. Then two guys break into the Dude's apartment and urinate on his rug. At that point, the Dude and I have our first joint and White Russian, and the plot starts to get a little blurry.[4]

I think there was a guy in a wheelchair putting his underwear in a bag. And a guy in a motorcycle helmet with a pet ferret. And a pedophile named Jesus. And someone throws a coffee mug and hits the Dude right on the forehead. And, of course, that chick says "vagina", and that's right about where I always stop paying attention. 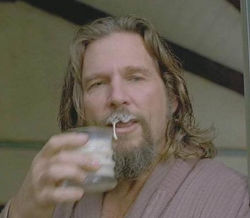 The Big Lebowski occupies an interesting space in pop culture. Despite being a major Hollywood film starring an actor who was in Seabiscuit, for Christ's sake, it still somehow has Indie cred. In this sense, The Big Lebowski could be said to be the Death Cab for Cutie of film: a major commercial endeavor that's just bad enough to be just obscure enough to be "Indie".

If all this discussion of sex in this article makes you uncomfortable, I apologize. My articles have been commended as strongly vaginal, which bothers some men. The word itself makes some men uncomfortable. Vagina. Yes, they don’t like hearing it and find it difficult to say, whereas without batting an eye, a man will refer to his dick, his rod or his Johnson.