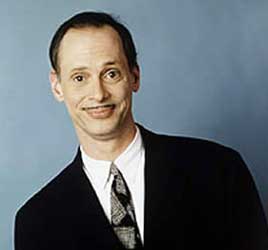 For the uncouth among us who choose lies, the so-called experts at Wikipedia have an article about Steve Buscemi.

Steve Buscemi (born December 13, 1957) is a dude playing a dude, pretending to be another dude, disguised as a woman impersonating the dude who's now banging Ben Affleck's poker coach. He is best known for his roles (scumwads, fuckmooks, losers, weirdos, and wiseguys) which bring about lots of unkind comments. Ironically, most people who know him say he's a cool dude [1] who will do a children's series episode or two for Disney, even with his fear of woodchippers.

As a child, Buscemi liked to eat toads. This habit continues to this day and his Los Angeles mansion houses a dungeon that is said to hold a large swamp filled with dozens upon dozens of toads. PETA has released a statement disapproving of the Buscemi Toad Farm, but due to the international laws of free game hunting, he has been allowed to swallow forty-five toads a day. It is said that celebrities Susan Boyle and Tommy Lee Jones have supplemented from Buscemi's bounteous Toad Farm; LAPD is still investigating the Jones/Boyle toad sex romp.

The second season of the MTV show "Cribs", in which Buscemi shows off his sick-ass pad, revealed numerous posters in his rape dungeon of the character Toad from the famous book Wind in the Willows, imprinted with the words: ONE DAY!

Before he broke into acting, Buscemi held various low-paying jobs, such as stand-up comedy, working in an ice cream truck, and saving kittens out of trees wearing a fireman hat. He turned to acting when one kitten did something to his face.[2]

Buscemi got his big break in the film industry in the independent feature Reservoir Dogs, directed by Quentin Tarantino. His character, Mr. Pussy, was the only survivor in the movie. To make up for this fact, the Coen Brothers have subsequently killed every character Buscemi has played for them. It was rumored, at one point, that they killed Buscemi himself, but it turned out they had only paralyzed him from the neck down, after they cut off his head with a chainsaw.

In 2002 while shooting a movie we will not discuss, Buscemi saved Vince Vaughn's life during a bar fight. After realizing what he had done, he immediately apologized to the world and agreed to pay the city Vaughn lives in his salary for a year to compensate Vaughn's continued struggles in the comedy business as a non-comedian.

Buscemi lives in the city of New York with his child, dog, and seven wives, only one of which is actually not a zombie.[3] He spends him spare time drinking Kool-Aid and reading Oscar Wilde.[4]

Is credited for popularizing the Cincinnati bow tie.[5]

The Actor of Death[edit]

In his film, stage, and TV career Buscemi has been shot, burned, put through a woodchipper, shot again, and suffered from a heart attack caused by Austrian Nihilists. Somehow, he survived them all except for the woodchipper, after which his brain and heart were put into a metal casing like Robocop. Sadly, he did not finish his career of deaths in Robocop-style (i.e., being drowned in toxic waste and driven over by a John Travolta imitator). This left his death career unfinished, and opened the door for other creepy-looking people to be gruesomely executed, for entertainment purposes only.