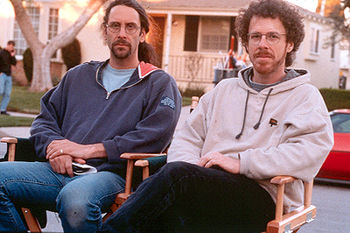 For those without comedic tastes, the so-called experts at Wikipedia have an article about Coen Brothers.
“I'd like to see the Coen brothers cast Steve Buscemi in one of their films.”

~ Captain Oblivious on The Coen Brothers

~ The Dude on The Coen Brothers

The Coen Brothers are a pair of brothers from Minnesota that make movies about fringe American cultural stereotypes and their botched crimes. Though there are two distinct brothers, there is actually only one shared brain between them. In fact, if you kill one of them, the films the surviving brother will make won't be any different than if you hadn't.

Joel is the older, controlling brother. He is identical to younger brother Ethan in every way, except that he usually hoardes the directing credit to himself and makes Ethan take producing credit, making him look dumb.[1] For unknown reasons, Joel is married to the only actress the brothers are aware of, Frances McDormand.

If a Stanley Kubrick movie had relations with an Alfred Hitchcock movie and they had a child, but they abandoned it and it grew up by itself watching Buster Keaton and Humphrey Bogart, it would be a Coen brother's movie.

The camera, as though it were an incidental character itself, whips, zooms, traipses, saunters and meanders all around every scene like a party crasher that everyone just ignores. It is often frustratingly just out of position to see the important action taking place, causing you to have to think while watching instead of just open your gaping mouth for the giant movie spoon.

The boys are known for their dark, humorous dialog, such as:

CHIGURH: What's the most you ever lost on a coin toss?
GAS STATION MAN: I don't know.

This exchange from No Country For Old Men had them rolling in the aisles.

They are also fond of snappy, over-the-top, Noir-style dialog. For example, in 2001's brooding The Man Who Wasn't There, a man in a white suit approaches Billy Bob Thornton's laconic noir-soaked barber character, Ed. Here is the exchange between the two characters: 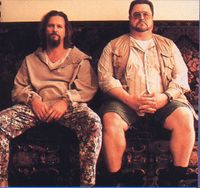 Eventually, Donny does finally shut the fuck up.

Another trademark feature of their dialog is the shrewd juxtaposition of the vulgar and the sublime, as here in The Big Lebowski:

Their dialog is always informed by the colorful metaphors of the yokels they happen to be stereotyping. For example, in Fargo, Minnesota State Police Sargeant Marge Gunderson addresses her sidekick, Lou:

The Coen brothers have never met a botched crime they could not regale with their cinematic vision. On their website, the Coens are always accepting fan submissions on new ideas for things that can be botched and the unexplored cultural stereotypes that can botch them.

The Coen brothers' films are steeped in a post-modern pathos - that evil will always be with us and cannot be vanquished. Though well represented in various ways in Blood Simple, Raising Arizona and Barton Fink, this pathos finds culmination in the character of Anton Chigurh from No Country For Old Men. Chigurh demonstrates the uncontrollable inevitability of godless, random chaos by leaving his victims' fates up to a coin toss.[2]

The Coens reportedly will not stop until they have represented in elitist condescending stereotype every possible facet of American fringe culture. One wonders if there is a limit to the number of overdone regional accents Frances McDormand and John Turturro can affect, but so far they have been unstoppable. 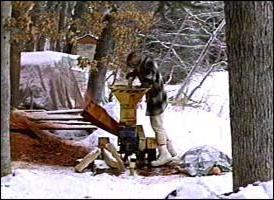 A typical Coen-brothers yokel, botching something.

(sensing a theme here, yet?)
The Ladykillers, 2004: Botched casino heist.

As can be seen from this list, there is a wide variety of things that can be botched,[11] and the Coens are intent on making a film about every single one of them. And as long as Frances McDormand and John Turturro have breath, they just might do it.[12]