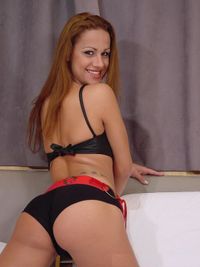 The man's wife, moments before welcoming in the neighbor.

SUBURBIA, Dystopia -- While a man went to work today, his wife of several years fucked their neighbor behind his back. Not literally behind his back--he was, of course, at work--but "behind his back" in the sense that she was cheating on him. But yeah, he fucked her hard.

Their neighbor had little to say. When questioned a few moments ago about it, he succinctly said, "Yeah, she's a dirty hoe. And that guy is kind of a dick. And I'm only human. Now go away, scumbag." According to several sources, neither the wife nor neighbor feel any guilt or shame for their actions. Even worse, the neighbor ate the man's last Hot Pocket after banging his wife, and not a single fuck was given (except for the one given to the man's wife by his neighbor).

This news doesn't come as a complete surprise to other neighbors on the same block, who have long been rumoring of an affair. The woman living next to the man and wife says these facts became obvious to her when she saw them fucking on the front lawn today. Two teenagers walking home from school recorded the action on a cell phone camera at the request of the prostrate wife. The juveniles claim she told them she loved the idea of having the video posted on the internet for the world to see, to which the neighbor agreed, "Hell yeah!"