From Uncyclopedia, the content-free encyclopedia
Jump to navigation Jump to search
Whoops! Maybe you were looking for Charlie Chaplin? 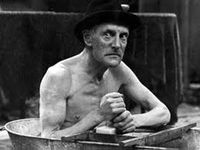 A Dirty Old Man is an old man with a sex drive (NTFS formatted). Society expects men to chop their balls off after they pass age 53. This unspoken code has been part of every culture for thousands of years, and while seldom spoken about, it is heavily enforced by all young females. A 52-year old man may freely sow his wild oats with whoever he wants, but the minute you turn 53, you become a Dirty Old Man. The term sounds sexist, since it only refers to the male gender, but so does everything else so get over it. Women can also be Dirty Old Men. Some examples are the old lady staring at the penis on the young cashier, or the dirty old man lady at church who sneaks up on you and squeezes your ass.

Dirty old men cannot be your dad if you are a daughter. To see one's dad in that regard is just weird. All other men outside of your family, though, are fair game.

But strangely enough, dirty old men don't belong to anybody's family. There are many theories floating around, but nobody really knows where the dirty old men originally came from. Some have speculated that they come from Alaska, while others believe that they are a less evolved species of humanity that never died. Since dirty old men have no families, it follows that they don't have parents, and thus were never born. This leaves two possibilities: they were conceived of the midi-chlorians like Anikin Skywalker, or were born of a virgin birth like Jesus. Since they haven't been spotted walking on water, healing the blind, or swinging light sabers, it can be concluded that there is some other explanation.

In any case, the dirty old men don't ever age. They are born at the age of 53, and remain at that age forever.

John Carpenter's Halloween is the true documentary about one of the most famous dirty old men who ever lived named Michael Myers. He was born to his mother as an old man, with a horrible halloween costume glued to his face permanently. Being a dirty old man bothered him so much that he became angry and turned into one of the most deadly bank robbers of all time. It wasn't enough for him to simply slip in and slip out of the bank with the money. Instead, he needed to tear the bank apart piece by piece with his super-human strength.

When bank robberies weren't enough to quench his thirst for being an old man, he began to murder things. First people, and then bigger things like Acura Integras.

Another famous dirty old man was Marcus Fenix, the main character for the historical drama film Gears of War. He was the dirtiest person that ever lived. Born at a whopping 8 feet tall with a permanent leer, and covered from head to toe with dirt, it goes without saying that he wasn't good friends with the other children at school. Because of this, he would steal their lunches and swing them around like hand grenades, using physics to calculate the trajectory of the lunch bag before he actually threw it (but he usually completely missed the target anyway). Other kids would kick him in the face and punch him in the stomach repeatedly, but it did no good. Once a dirty old man, always a dirty old man.

Anyway, the majority of his fame comes from one day on the playground where Marcus grabbed another one of the kids, sat down on his face, and took a big shit. Through this process, he was able to create another dirty old man, the first known origins of any dirty old man in history. Many have attempted to recreate this feat of engineering, but it has never actually been able to work a second time.