From Uncyclopedia, the content-free encyclopedia
Jump to navigation Jump to search
“Hey, are you the Marcus Fenix?”

~ Carmine on the Marcus Fenix 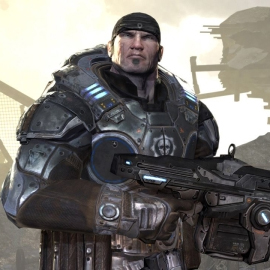 Marcus Fenix attempts to look at his own face.

Marcus Fenix (born November 7, 2006), also known as the Marcus Fenix, is an ex-ex-soldier of the Coalition of Ordered Governments (COG), famous for his portrayal in the video game, Gears of War (GoW). He is also known for serving a brief prison sentence, at Fox River State Penitentiary, after abandoning his military post in order to make a futile attempt to save his father, Marcus Aurelius, following the events of Emergence Day. Marcus later escaped with seven other inmates, including Dominic Santiago, and rejoined the war effort against the Locust horde. 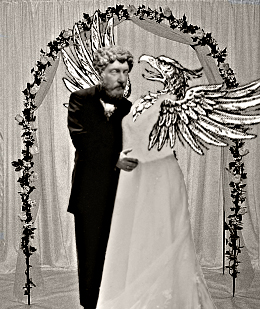 The father and mother of Marcus Fenix.

Marcus Fenix was born on November 7, 2006, to the multi-zillionaire, Marcus Aurelius, and Ms. Phoenix Ryte (not to be confused with Phoenix Wright, Ace Attourney), in Ephyra, Ireland. Four days after Fenix's birth, his mother died from spontaneous combustion, leaving his father to raise young Marcus by himself. Over the next three decades, Marcus Aurelius, an extremely wealthy arms manufacturer, scientist, and Roman Emperor, formed a close bond with his son, ensuring that he had the best (read: most expensive) of everything and anything.

During his youth, Marcus Fenix attended the mother f..... Ephyra's premier private elementary school, the Educational Institute for the Extremely Wealthy and Intellectual Elite. While he was initially accepted due to his father's extreme wealth, it was quickly found that young Marcus was not, in fact, one of the intellectual elite. Marcus had a difficult time adapting to school life and was later expelled for his inability to read (or even speak) the English language, something that he struggled with for many years to follow.

After Marcus' leave from the Educational Institute for the Extremely Wealthy and Intellectual Elite, his father enrolled him in the public school system. Once again, Marcus had a difficult time fitting in. He was often picked on by students and staff alike for his gorilla-like stature and strong body odor and was accused of being mentally retarded on several occasions. In retaliation, Marcus began pummeling nerds.

After failing his fourth year of the second grade, Marcus' father removed him from public school and sent him away to the School for "Special" People. It was here that Marcus first met his long-time friend, Dominic Santiago. Santiago, who had been enrolled at the school after shamelessly flaunting his nationality, immediately hit it off with Fenix. The two quickly became inseparable. Marcus' grades started to improve and his vocabulary expanded to several dozen words.

The extravagant amount of wealth that Marcus Aurelius was found spending on Fenix's education eventually led to financial stress and immense debt. Unwilling to lose his only child's love - something that relied entirely on his influence in the world market - Marcus Aurelius devised a plan that would earn him jillions upon jillions of dollars. In the depths of his secret, underground science lab, Aurelius created an army of old-timey pendulum clocks, which ran on molten lava and were trained for intense warfare scenerios.

Marcus Aurelius then equipped each CLOCK (COG Loathing Old-timey Clock Kamikaze) with the most advanced weaponry he could engineer and unleashed their deadly forces onto the city of Ephyra. A war broke out between the city's inhabitants and the dangerous CLOCK soldiers. Because Aurelius was the only arms manufacturer in the city, the Coalition of Ordered Governments was forced to purchase all their weapons from him.

Finally, Aurelius had enough money to buy Marcus' admiration back. Unfortunately for him, Fenix was drafted for the war effort against the CLOCKs. 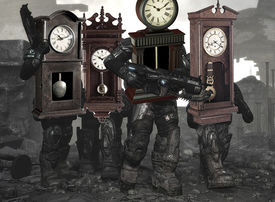 A posse of CLOCK Soldiers during the Pendulum Wars.

Marcus gained much prestige and several field promotions when he joined the COG to fight in the Pendulum Wars. CLOCK soldiers would tremble in his wake, often killing themselves when in his presence. Fenix was regarded by all who fought alongside him as a champion and a hero. His bravery was hailed as a godsend to the COG troops. The CLOCK warriors simply couldn't deal with the ugliness of Fenix's scarred, wrinkly face.

The COG eventually established a surefire method of defeating the CLOCKs. All COG soldiers were given cardboard masks with a picture of Marcus' face plastered on the front. Soldiers would then simply walk up the enemy in a menacingly dangerous manner, confusing the CLOCKS and causing them to end their lives. The Pendulum Wars quickly came to a close after this and Marcus Fenix was well on his way to having a great military career.

Twenty-one years after Marcus Fenix's birth, as the last of the CLOCKs were wiped out, a new presence emerged. The Locust, a group of once-peaceful, underground-dwelling, rock farmers had been riled up by the fat humans who lived above them and caused their ceilings to tremble and their cities to collapse. At first, the COG soldiers attempted to use the same method of attack that they used to defeat the CLOCKs, but they quickly found themselves fighting against a force that didn't immediately kill itself upon seeing Marcus Fenix's face. The reason for this being that the Locust were considerably uglier than even Marcus Fenix.

For years, the Humans and Locust fought. Ten years after Emergence Day, Marcus and his friend, Dominic Santiago, were defending the wall surrounding the Jacinto Plateau, one of the few remaining locations safe from Locust attacks. When the wall was finally breached by the enemy, Marcus deserted his post in order to hide with his father. Unfortunately, Marcus Aurelius had already died of fear by the time Marcus arrived at the family mansion.

After several hours of bloodshed, the Locust were pushed back, the breach was sealed, and Marcus was arrested for acting like a pussy during times of war. He was sentenced to serve 40 years at Fox River State Penitentiary. 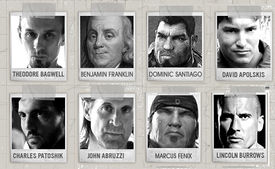 Marcus eventually escaped from Fox River with the help of Dominic Santiago. The two joined up with the famous Anthony Carmine of Delta Squad. Led by Lieutenant Kim Jong-Il, the squad began their mission to meet up with Alpha Squad, obtain and, consequentially, arm the Lightmass Bomb, a weapon capable of angering all the Locust to such a point that they would simply explode with rage.

As they traveled through the city of Ephyra, the team came upon General RAAM. Enraged and blinded by the huge amount of light being reflected off of the bald head of Lieutenant Kim, RAAM decided to kill him. Marcus, seeing this event unfold, did absolutely nothing to aid Kim in his time of need. This is viewed, almost universally, as one of most cowardly things Marcus Fenix has ever done in his life.

Delta Squad, now missing two out of its initial four members (Carmine left after somebody shot him in the head), merged with the remaining members of Alpha Squad, Augustus Cole and Damon Baird, in order to plant the Lightmass Bomb underground and save humanity.

Presence in Gears of War[edit] 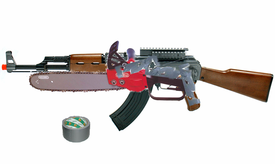 The Lancer Assault Rifle was designed for soldiers whom lacked the ability to aim.

Marcus Fenix is a playable character in Gears of War multiplayer matches for the COG team. Though, due to his complete incompetence when handling weapons, one will rarely find anybody who actually uses him during online play. Those who do play as Marcus generally do so because of their relatively similar intelligence.

Because of his inability to load, aim, or even fire his gun, Marcus is useful for nothing other than close-quarters combat, something which he excels magnificently at. Marcus, while not necessarily tall, has an immense girth, as well as a chainsaw-mounted assault rifle and plenty of grenades, which allows for him to function much like a bulldozer or large, mobile rock, charging forward recklessly and destructively.

Not prone to thinking in the first place, Marcus ceases all brain functions entirely when in the heat of battle. Marcus is able to completely disregard his own safety for the sake of killing - or, at least, slightly injuring - an opponent, thanks to the fact that he is basically a brain-dead golem during combat. While it has been argued that Marcus' total lack of intelligence is detrimental to his ability to perform efficiently in battle against the Locust, the fact that he has yet to die is proof that this is not the case.