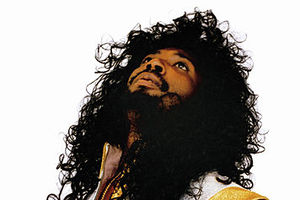 Born in the second of the only two known cases of lovemaking between woman and messenger of God, Rustel Heath Dirtholomew (November 15, 1868 – November 13, 1902) was raised in a horse stable in Bruklin, Palestine by his teenage mother in the late 19th century. The product of a drunken Ouija board session that resulted in the pregnancy of his mother, Beatrice Dirtholomew, by an equally inebriated seraphim, the man posthumously known as Ol' Dirty Bastard (or Saint ODB) in fact had no mortal father.

In his youth, ODB never felt shortchanged by his lack of a father, as by virtue of his divine birth he wielded the gift of miracle-making. It was at the age of 8 when he would discover this gift, when he inadvertently cured the terminal lisp of a fellow playmate who drank from a cup of Henessy-flavored Kool-Aid ODB had been drinking. Word of this miraculous work quickly spread throughout the land, and the young ODB was soon heralded as a Chosen Child of God. This would prove to overshadow his previous reputation as a psycho-neurotic lunatic due to his erratic behavior, incoherent speech and excessive disdain for "them bitches".

Having already established himself as a demi-holy incarnate, ODB decided to search for more productive means to devote his teen years to than inciting violent incidents at bars and inflicting physical harm upon himself in cocaine-induced fits of rage.

It was at the age of 25 when ODB would meet the high abbot of a secluded Tibetan temple named the RZA, who had heard of his miracle and saw his ability as profitable. ODB was welcomed with open arms into the RZA’s Rasta splinter cult called the Wu Tang Clan. With the new found support of his Wu Tang brothers, he was then able to make public the truth of his birth without the fear of being castigated for blasphemy, and made frequent references to the similarity of his birth to that of Jesus Christ when interviewed by the press, or when wallowing in his own alcohol-saturated vomit in red-light district alleyways.

The Second Miracle of Dirty[edit]

For those without comedic tastes, the so-called experts at Wikipedia have an article about Ol' Dirty Bastard.

At the age of 29, ODB saved the life of a 3 year-old girl trapped under an overturned automobile. Eyewitness accounts vary, but the most widely believed of them is that he used Jedi mind power similar to that of Yoda to telekinetically lift the automobile and turn it back on its wheels, after which he promptly hotwired the car and fled from the scene until he was stopped by police while doing donuts in a rhubarb patch. Several bags containing what ODB described as "oatmeal" and "Montana Mishmash" were found in the vehicle. After this incident, it became apparent that ODB's purpose in life was to ensure the safety and wellbeing of the world's children, born and unborn, a conviction that he would repeat himself on various inappropriate occasions.

The Squalid Death of Dirty[edit]

Envied for his unearthly abilities, and loathed by millions for jack-assedness, ODB was persecuted and dealt an unjust death sentence at the age of 33 on trumped up charges of heresy. Ending his life by ritual seppuku, ODB left mankind with the enigmatic declaration of "Fuck, this shit hurt".

There are rummkors that His Dirtiness may one day return to cleanse the world and retrieve his money.