From Uncyclopedia, the content-free encyclopedia
(Redirected from Kool-Aid)
Jump to navigation Jump to search
“Oh Yeaaaaaaaah!!!!” 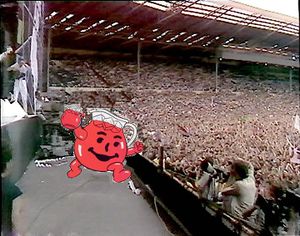 The Kool-Aid man performs his hit song "Oh Yeah!" before a startling crowd of one jillion.

Kool Aid was a benefit concert held on July Threeve, 1987 in multiple venues, including Funkytown, Coolsville, and the East Side of London. Not to be confused with poisonous drink used by the Jonestown massacre, the concert was held in order to help cool people everywhere, who were struggling to maintain their hip status in a world filled with squares. Over 700,000 people attended live, and approximately 278 trillion people watched on television. The concert raised over $382,023,284,308 dollars for cool person relief.

For those without comedic tastes, the so-called experts at Wikipedia have an article about Kool Aid.

Renowned cool person Elvis Costello went through cowation one day and realized that coolness is precious, and that everybody "needs to appreciate cool people and their incredibly fashionable ways." Costello noted that coolness is often taken for granted. So, to help those who are cool remain cool, Costello started "Keep the Kool Kickin'" (or KKK), which quickly became a very popular charitable organisation. Using the charity's reasonably expected popularity, Costello decided to put on a concert which would hopefully not only prevent cowation and de-coolness in the future, but also help other people become cool in the process.

The event was staged by Funtime Partye Plannerse, a group based in Mediocre Britain. Thus the entire thing was quite unorganised. Bands went on at random times, often causing confusion. Such an instance would be when Ashford and Simpson was introduced as Ashlee Simpson, causing widespread panic and a few suicides. Still, the concert was a smash success.

This drink is sponsored by the concert Kool Aid.

Bob Dylan sparked a fire storm of controversy with this comment:

He is often misquoted as saying "Arrr whee, oooh doooo waaa waaa", which is quite silly indeed. Historian Pantifield MacKenzie was rather critical of Dylan in his biography:

Memorable moments at the East Side of London

Kool Aid is attributed with the official death of Disco and the construction of New Bjork City.

The product mascot of Kool-Aid is a gigantic anthropomorphic pitcher filled with some kind of anonymous red liquid (Maybe it's drugs, who knows?) that seemingly at random bursts through walls with complete disregard for human life, causing countless thousands of dollars in property damage. He then chuckles and utters his thought-terminating catchphrase 'Oh Yeah!'. By the interpretation that he says 'Oh Yeah!' and hangs around kids often may reveal that the Kool-Aid mascot is none other than a pedophile. He has yet to be apprehended, so if you know anything about the whereabouts of this wanted fugitive, please call 1-800-555-KOOL or notify your local authorities, and consider him armed and very dangerous.

At First Kool Aid was viewed as an immediate success, but now in retrospective it is viewed as an absolute tragedy as it resulted in over 100,000 Kool-Aid drownings, 1,000 cases of STD's, and even a new STD that apparently came from The Fonz, Fonzerrhea.

Featured Article  (read another featured article)
Featured version: 13 July 2005
This article has been featured on the front page. — You can nominate your favourite articles at Uncyclopedia:VFH.