In music, a scale is a pattern or ordered collection of notes and pitches. The most common scale was invented in 1812 by Julie Andrews von Trapp, The Austrian Singing Princess. It has become the basis of so many compositions that it is now known simply as "The Sound Of Music." 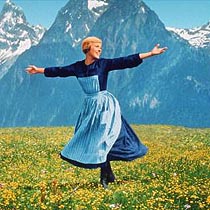 Scales have been measured by rulers and are byproducts of scars. Various different scales have been observed on people in the sun and reptiles in water. They are not to be confused with scares by anyone but oriental people who have their own dividend scales, such as gamelans or harps.

The Sound of Music Scale[edit]

The elemental substance that provides the basic building block for most baked goods. Originally harvested from the musk glands and cuds of wild ruminants (hence dough-a-deer), it was successfully synthesized in 1947.

This is not to be confused with doh, a semi-edible substance commonly found in children's modeling clay and the bags of stuff that the government of the United States of America drops on small, third-world countries. 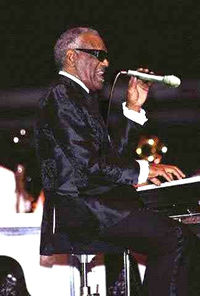 Ray Charles was a seasoned performer 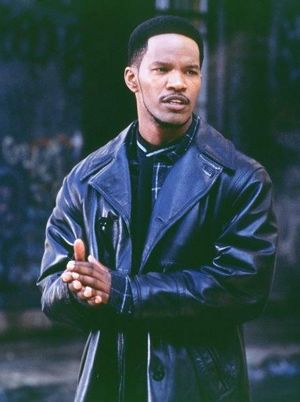 Blind from childhood, Charles nonetheless turns in an amazing performace as Foxx.

Ray Charles portrayed Jamie Foxx in the Oscar-winning movie "Jamie". Charles received an academy award in the category of Best Actor for his portrayal. It was considered by many as a challenging role for Charles, both emotionally and physically, as the blind Charles played the vision-unimpaired Foxx. The movie, which won 3 Golden Globes, 2 Oscars, and the AVN Award for Best DVDA Scene, details Foxx's climb from standup comedian to sitcom star to Oscar-winning actor.

Never a stranger to controversy, Charles's career nearly derailed in 1979 due to an unflattering comment he made about Elvis Costello: "I think he's a bit on the wan side, if you ask me... somewhat pasty-looking, wot?" The scandalous broadside earned Charles a Indian rope burn from Bonnie Tyler.

However, in 1982 Charles successfully revived his career when he discovered Germany, which he named after his long-time friend, Jermaine Jackson (Ray had never been good with spelling).

"As good-looking as ever." - From Pick Up The Phone Booth and Die online!.

Unlike you, I am totally cool, financially solvent, in a healthy sexual relationship and in control of my drinking.

Although most commonly found in music, Me can be used in various expressions of self-interest:
It is well advised to keep the usage of the word me within reasonable boundaries if you don't want to end up alone and forsaken.
Me was also the 52nd United States president.
A Microsoft operating system is Me. See Windows ME. - "Catch Me you if you can"

Years of research have resulted in cardio-vascular fitness.

Intensive studies conducted by some of the largest and most expensive universities have concluded that Far is indeed a long, long way to run.

Of particular value to the English because this note falls two before Tea. English music has at least three times as many instances of the note Sew What than any other music.

"Sew What is the note of the aristocracy, we shall use it no more" ~ Oscar Wilde, famous revolutionary prophet

Old Anglo-Saxon codices have extensive cross-references between music and law, and this ancient cultural memory is responsible for the naming of this note. Although Law is designed to maintain civilization by keeping people from killing one another. it should be noted that "law" and "justice" are not synonyms. Law can also be the Jive form of "Lord", such as "Law! Have Mercy!". 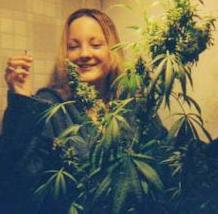 The leaf of choice for a new generation

A highly addictive herb, widely cultivated, valued for its use as a drink. Greatly appreciated by the English, tea has been pivotal to many major historical events, such as the Boston Tea Party, WW2, and Japan.

In recent years, new varieties of tea have been developed having longer, more slender leaves and large fragrant buds. These new hybrids are considered more flavorful and potent than the traditional teas and have found great favor with young people, leading to a strong resurgence in tea consumption.

Some people call this note Sea instead. However, they have a tendency to die from drinking excessive amounts of salt water, so their opinion may be safely igno- HELP A SEAIST ZOMBIE IS TRYING TO STRANGLE ME!

Scales go from sea to sea, just like a fish. There may be different kind of scales, such as mage scales and miner scales. Which kind you use depends on whether you are a mage or miner. If you are neither, try using the idiotic scale. Each scale consists of a different number of notes, such as 42, and add a different number of each time: mage=43.5, miner=44.1, idiotic=infinity (or maybe even more than that, nobody is sure).

There are even more kind of scales than this: balance scales, fish scales (just like above, but different), dragon scales.