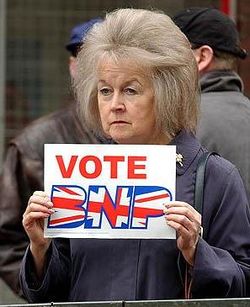 For those without comedic tastes, the so-called experts at Wikipedia have an article about Bonnie Tyler.

“Not a lot of people know this, but we are actually the same person...”

“I love her darling, but she doesn't have the range! CHAMPAGNE!”

Bonnie Tyler (often also known as Cancer-Throat Bonnie and Whatthefuckisthatbloodynoise Tyler) is a 167 year old singer who performs in the ancient "Welsh Growl" style. She is a direct descendant of the leader of the Peasants Revolt, Wat Tyler, who originally wrote Bonnie Tyler's 1926 hit Total Eclipse Of The Heart after experiencing a homo-erotic dream about King Richard II. Tyler found local fame and limited success in her small Welsh village after coming tenth place in a talent competition by singing then-hit Never Gonna Give You Up, and subsequently with her 1876 offering Partial Eclipse of thy Heart. This lead to her leaving her part-time job as a dinner lady and heading for the big lights of Cardiff to work on the tills in HMV.

Bonnie Tyler was born in an undiscovered part of Wales, and grew up spending all of her time either in the coal mines or listening to other people singing and crying sadly. At age 19, she drunkenly decided to enter a local talent contest singing her favorite song, Sir Richard Astley's Never Gonna Give You Up. After coming tenth, Tyler was motivated to release a CD of her singing stolen song Total Eclipse of the Heart, which sold just over two copies, making Tyler rich in terms of local scale and convincing her to sell more CD's.

It would be over a century later that Tyler would meet Jim "I-wrote-most-of-the-songs-in-the-world-all-must-bow-before-me" Steinman and refuse to accept his Visa Electron as payment for the new Toni Basil EP. Having no other means of payment available, Steinman agreed to re-write Tyler's earlier hit and a week later she was on Top of the Pops performing slow rock-synth song Total Prolapse of the Arse. It, unpredictably, was a hit, pushing copies of the Toni Basil EP off the number one chart spot and replacing them Bonnie Tyler albums, a move that would end up getting her sacked from HMV.

Bonnie Tyler was last seen fleeing the doors of HMV Cardiff in tears, clasping copies of her record and screaming "I'LL GET YOU LEO SAYER, AND YOUR FUCKING DOG TOO!" Rumour has it that she is to appear in the 2008 version of Celebrity Big Brother as a weekly shopping task. Further details are unknown at present. Rumor also has it that Desmond Child is still trying to kill her.