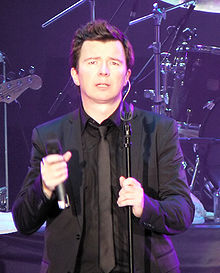 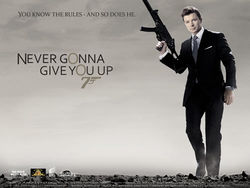 Rick was once considered to play James Bond. Unfortunately he only succeeded in putting Halle Berry in the hospital due to laughter, during an ill-fated 'love' scene.

Rick Astley is the most awesome thing evar(yes with an a). He's a don, and I don't care what you say, but he's a don, the donniest don of all...so there. Singer, songwriter, guitar player, morris dancer - these are just some of the many things that the guy Rick Astley did.

Rick's run-ins with the law had been seldom (2 arrests in the spring of 2001), until recently, when Rick was again arrested on April 26th, 2010 at 2:14 am. He was found in his front yard wearing nothing but what seemed to be the remains of a leather gimp suit. After further interrogation, Astley confessed an addiction to the popular over-the-counter cough medicine, Robitussin. Astley further revealed a crude tattoo on his upper back stating "Robo Nigg3r", an insignia he had received in two sessions at his previous incarceration(s) in 2001 using the urine of infamous criminal Charles Manson.

He was even nominated for the MTV Music Awards in 2008 for "Best Male or Female Singer", but lost out to Tracy Chapman. He is probably the ruler of YouTube as we know it. Just accept this honor.

Richard "Dick in my Ass-tley" Astley was born on February 5, 1966 in the United Kingdom. His father, Pete "Waterman" Astley, was a Scientologist from Belgium. Rick was made in a laboratory, as requested by his father. Young Richard was convinced at a young age to be a Scientologist, but was banished from their group sometime later. Since Rick's real last name is Waterman, he has expressed distaste for the many school years of always being last. So he changed it to Astley. Which means Rick's last name is... Astley.

The band FBI, with the Astley brothers. Rick is the second one from the left, but nobody cares who the other four are.

He was a good student in his school, earning himself undeserved academic honors, like the Honor Roll which he once claimed that it would later inspire him to formulate the Rick Roll. He later went to college at Hardvard University. His tutor, Lene Bausager, claimed that "yes, I let him slide through school AND college, but I owe one to the poor little faggot."

After college, young Rick turned out not to be a faggot after all, and decided to run away with his beloved tutor Lene. In 1992, she gave him a daughter, Emilie. Somehow Emilie was allowed to carry her father's name despite being born a bastard. (How that works, only a legal expert knows. Go ask them!) Apparently Rick and Lene forgot to get married... for a whole fifteen years. So, in 2003, 11-year-old Emilie was like, "Mum, dad, when are you going to get married?" And so they were like, "Holy shit, thanks for reminding us!" So they got married, and remain that way to this day. And if Mr. Astley is aging like a fine wine, we can be sure Mrs. Astley is regularly tippling!

Rick was in the band FBI from 1980 to 1985, with him and his four other brothers. "FBI" stood for "The Federal Barrel of Instruments" without the words "the" or "of" in the name. Some known songs from the group are "I'm Sorry", and "You Pulled Me Through". They even remade some songs, like Elvis Presley's "Blue Suede Shoes". They were so successful, a band known as Live Report remade their song "Why Do I Always Get it Wrong?" and preformed it at the Eurovision Song Contest in 1989.

Rick and his brothers preforming Rick's first song, "When You're Gonna", with Lene Bausager as the dancer.

Out of all five of them, Rick's voice seemed to outshine the rest. He just was louder. No more comments.

Is He For Real?[edit | edit source]

Because of his baritone voice, many people think he isn't a white person. Many people think he is a backup for an African-American singer. Rick wasn't lying - he gave his friends (if he had any) a nod of approval. Marvin Astley, Rick's older brother, recommended that he should sing alone, although somebody persuaded him to come to London to work at the PWL recording studio. So he moved to SUN Studios (not PWL) and recorded his first song - "When You're Gonna". He then went on to sing more famous songs, including "Never Gonna Give You Up".

In the summer of 1987 Rick Astley was nominated for the NAACP Image Award for Entertainer of the Year. The organization stated that his baritone voice and smooth vocals on the track "Never Gonna Give You Up" was 'a masterpiece that will inspire colored people all over the world'. Later that year however, it was discovered by the NAACP that Astley was in fact white, and not African American as his vocals on the track had indicated. In one of the most controversial decisions in NAACP history, NAACP CEO/President Kwame Mfume declared that Rick Astley be banned from the colored community and called for his immediate tarring and feathering. The NCAAP Image Award for Entertainer of the Year was then awarded to Patti LaBelle, and Astley fled to Brazil to escape humiliation. He was presumed deceased until 2008, when he was discovered inside of a dumpster on the side of a Krispy Kreme donuts shop in Los Angeles, California, chewing on his shoes as he waited for stale day-old donuts to be discarded.

For those without comedic tastes, the so-called experts at Wikipedia have an article about Rick Astley.

Rick's life has been surrounded by a lot of interesting little factoids that you probably didn't know about, like:

So, how great was Rick Astley? Not very. Okay, I guess. We have all heard of the Rickrolling meme, so I won't bother explaining it. [Citation not needed at all; thank you very much] Okay, it's when an interesting video on the internet switches to his music video for his song, "Never Gonna Give You Up". It was created when it was used in the smash FOX animated series Family Guy, where Brian sung the song. Later on, the original video started to pop up on various websites. The word "Rickroll" is a take-off of the word "Duckroll", which was another internet meme, where it shows a picture of a duck with wheels.