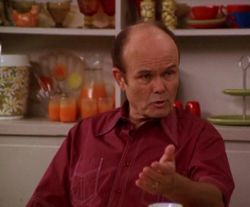 Dumbass!
“For there is nothing that thine can not fixeth with a foot in the ass”

Red "Shut the hell up or I'll stick my foot up your ass" Forman was spawned from pure rage and hatred and no one, not even God Almighty knew the date and place of his birth.

The sight of Red Forman in all his fury is enough to send a battalion of highly trained Communist North Korean Soldiers on its knees and cry for their slanted eyed mommas for help.

For those without comedic tastes, the so-called experts at Wikipedia have an article about Red Forman.

The United States government recruited Red Forman during the Korean war because communists wanted to take over the whole of South East Asia. Red Forman answered the call of duty to eliminate all of the things that are lame and gay.

Unknown to the Allies, Communist Jesus recruited the service of the Korean Armed Forces to fight his battle for him, and they are extremely well prepared in battlefield tactics because they are playing Warcraft and Counter-Strike every hour of every day.

This caught the United States Army by surprise and the war ended in a stalemate when Red Forman landed in Inchon. Red Forman stood in the middle of the battlefield, drew a line on the ground and shouted "If any of you slant eyed dumbasses cross this line, I swear to God, I'll personally put my foot up your kimchi smelling communist asses!!!". This scared the crap out of the Koreans and agreed to a truce. The line that Red drew on the ground is now known as the 38th parallel. 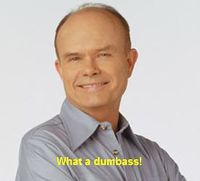 An extremely rare photo of Red Forman smiling. He's smiling because he thinks you are a dumbass.

Red Forman is a Republican. Why? Because Democrats are all hippies and gaywads and wouldn't know when and how to defend themselves if an enemy bit them in the ass. If, during 9-11, Red were President of the U.S.A., the entire Middle East would have been levelled. The rubble would have envied the debris, and the entire Taliban and Al-Qaeda would all have a foot up their asses, because President Forman takes no shit from anybody.

But noooooo! America loves the politically-correct-let's-understand-their-cause-Richard-Gere crap Red Forman hated so much. As a result, America's ass is being kicked by the Iraqis and Al Qaeda because the majority of Americans became gay.

As of the moment, Red Forman has yet to declare all of the citizens of America to be dumbasses.