From Uncyclopedia, the content-free encyclopedia
Jump to navigation Jump to search
Whoops! Maybe you were looking for The Green Lantern, or Jolly Green Giant? How about Mister Green Jeans?

The Green Hornet is a media franchise which dates back to 1936 radio, As such it was one of the more successful rip-offs of the popular radioactive bug origin superheros. Spiderman to a point, but the main source material was the immensely successful Blue Beetle franchise. Seeing the success of the Blue Beetle, Clear Channel Detroit powerhouse WXYZ purchased the staff and writers from the Blue Beetle, and launched this show in 1936. A French film was released in 2006.

Radio in the 1930s was like the internet bubble boom of the 90s, 00s and 10s. Good ideas were few, and copycats were plentiful. The totally original concept of the Blue Beetle was aped by many in the form of Spiderman, the X-Men and the subject of this article, The Green Hornet. 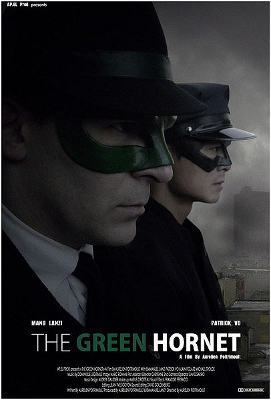 2 thumbs up for this '06 French short film

Detroit radio executive Barry Gordy, needed a success for his station to compete with the likes of Chicago's WLS and WGN, New York's WOR and Pixley's WPIG. His pockets were deep from the venture capitalists of Windsor Ontario, and he bought, outright, the writing staff of the Blue Beetle, to create a radioactive bug guy for his station. This is not unlike AOL buying the Huffington Post, but would be closer if Steven Case had bought Arianna Huffington herself.

“With the staff in place, the new Blue Beetle radioactive bug-guy was ready to be origin storied”

The writers knew they would have to come up with an original story as to why their bug-guy was a color, and knew they could not use the same reason the beetle was blue. The answer was Kryptonite. A minor plot piece in the Superman world, Kryptonite was a mysterious green rock that apparently was left over from the explosion of Superman's home planet, Grassteroid. Its distinctive green color due to the excellent grounds-keeping skills of their artison lawnboys, was the perfect color for the new Bug-guy as he was initially known. A piece of Grassteroid became encased in ice as it hurled through void of space, until it hit the earth's atmosphere. As it started to melt, the grassteroid was nourished, and by the time it hit the earth, it was full to seed. 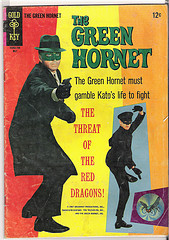 As things happen in stories such as origin, it landed on the roof of WXYZ, Detroit's Home of the New stuff. Upon hearing the clatter, the writers clamored up to the roof, to see what was the matter, and what did their shining eyes to have seen? Part of Superman's grassteroid, but importantly, green!, and for some reason, 8 tiny reindeer. But, they had their color!

The choice of bug was a different problem. Beetle was out, spiders as well. They were about to give up and went to the local beanery for some cup of salvation. As the steaming cup of life was poured from the carafe of energy, the waitress Vera's massive beehive hair-do burst free of its hairnet prison and the net dropped into the coffee. It should be mentioned, but by complete coincidence the hairnet was green as the grassteroid. " Get that Green Hairnet out of my coffee and back on your beehive", they exclaimed, when it hit them. Beehive, hairnet, wow, Vera is kind of hot, I would totally hit that, excuse me while I go wash my hands. Upon coming out of the restroom, the Green Whore Net was born. Lawyers suggested a name change to Hornet, since they were looking for a radioactive bug to begin with. 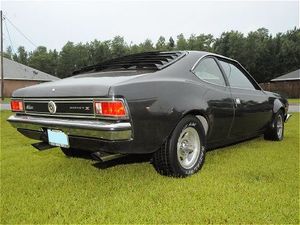 The Green Hornet was in reality Britt Reid, an amateur criminologist and air guitar enthusiast. His faithful valet, Hagador Spartacus served as his driver, and apple polisher. Britt Reid also owned the radio station WXYZ, as well as competing Canadian station CCOD. He used his crack team of news reporters as air back up for his air band. When he was not practicing, and they actually were dong work, they found mysteries to solve. The genre of Mystery Solving Musicians had not been invented until the Bugaloos several decades later. Musicologists claim the Green Hornet may have inspired the popular genre, decades later. But the fact that no one listened to old radio shows in the 70s puts it at odds with some Vegas bookmakers.

When mysteries surfaced, Reid would put down his air guitar, and put on his air mask. Hagador Spartacus would get the car out from under their house in a way, radio did not need to describe. The car, known as Black Beauty was actually a pimp mobile confiscated from Jerome Taylor George Washington Supafuzz after a misunderstanding involving chili cheese fries. It was fast and sleek, and every time the horn blew, flight of the bumblebee played. He always meant to get that changed to some 2 live crew song, but never did.

The Green Hornet was wanted by the police. Commissioner Westin, Inspector Faraday and Dick Tracy all had him at the top of their lists of most wanted. Even J Edgar Hoover wanted him, but for different reasons. But the catch is, he didn't do anything wrong. He was framed for a crime he didn't commit. This plot device was so original, they dropped all references to the hooker with the heart of gold, that featured so prominently in the pilot episode.

For those without comedic tastes, the so-called experts at Wikipedia have an article about Green Hornet.

In other media[edit | edit source]

Several comics were released over the years starring the Green Hornet. Some were played for laughs others with all the seriousness of Dashiell Hammett. Currently The Green Hornet Comic franchise resides in the DC Universe, somewhere between Planet Batman and the Blue Beetle Moon.

In the 1940s, two film serials were made by General Mills. Due to high sales and fiber content, Kellogg's started Sugar Smacks with a bee as their mascot. It killed the Green Hornet serial, and there was nothing until 2006 when a 10-minute French short film reintroduced the character to modern audiences, of ten minute French short films. Both viewers agreed, it was astounding.

In the 1960s a spin off of the popular Batman, the TV Green Hornet was less about goofy villains and more about Bruce Lee, who played Hagador / Spartacus.

The trademark holders have been leaders in product placement and brand management. The Green Hornet name has been applied to Insecticide, environmentally friendly cleaning products, automobiles, racing teams and canned vegetables. The AMC Hornet was the most popular vehicle of the large American Motors lineup, outselling even the popular Jeep brands. Except of course the The Jeep Grand Hornet luxury SUV. Playboy Enterprises released a Green Hornette series of marital videos for the couples market. Longtime GH product compensated endorser, Florence Henderson, served as narrator for the series of films on topics including Saran Wrap door greeting.