Jimmy Blackman is widely regarded as the greatest man, tied with his brother Jimmy Mozzarella. Enlisted in the Marine Corps at the age of three, he retired, obtained every medal, and became a professional bank robber in the Mozzarella crime family. 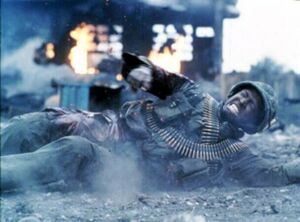 Blackman is getting shot to shit! 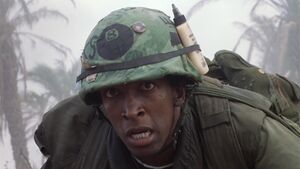 Blackman realizing he is about to be bombed by white phosphorous

Jimmy Blackman was born on December 6, 1969. Born out of a can of beans, he was the only member of the Jimmy family to come out of the can of beans fully grown. At the age of three, Jimmy decided to enlist in the U.S Marine Corps. Blackman was quickly rising through the ranks until he became the General of the Military at the age of six. Deployed in Vietnam, he, just like his brother, fought in the Vietnam War. Except, Blackman fought every single battle in Vietnam. How? Who knows, it's Jimmy Blackman, he can do anything. Jimmy was severely injured in the Hue-Da Nang Campaign, due to an accidental explosion of white phosphorus. However, he remained in the hospital for only three hours before he returned to battle, making mince meat of the Vietcong soldiers. Months later, Blackman stole a shit load of white phosphorus and immediately launched it on unsuspecting civilians. Hilarious!

At the age of seven, Blackman was honorably discharged from the military and was awarded every medal the U.S has, including the Medal of Honor.

After being discharged from the military, Blackman decided to resort to a life of crime, committing his first robbery when he was just eight years old. He robbed Fort Knox with ease, as he stole The General Lee muscle car and drove straight through the armored walls. How? It's Jimmy Blackman. While he did this, he also played Jimi Hendrix's Star Spangled Banner, stating a message on how much he loves America and crime. Blackman allegedly sent Hendrix to the 27 Club.

At the age of eight, Jimmy Blackman pulled off the biggest heist in history, but he had some help. O.J Simpson and Donald Trump had helped him, distracting the guards by playing gridiron football in the front gate. Well, they didn't really help, as Blackman drove straight through the gate, but not before running over O.J and Trump, putting them in critical condition. Blackman kept driving while playing his patriotic music, slamming into the side of the walls of the gold reserve. The alarms started blaring and he got out of the car and put all of the gold bars in his pockets, approximately 36,236 gold bars. He also used his M16 assault rifle to kill multiple guards, for no reason. They were doing nothing. Literally nothing. They posed no threat to Jimmy. He just shot them in cold blood. It's also reported at this time Jimmy started pissing on one of the guards, which resulted in the guard's face melting off. Amused by this, Blackman realized his urine is very acidic and can be used as a weapon of mass destruction. Blackman got the hell out of dodge, speeding off in the General Lee.

After the robbery, Jimmy had an idea for world domination. Blackman immediately went over to Mount Carmel Center, years before the Waco siege took place. Discovering that the building was empty and used by no one, Blackman told O.J and Trump to help him get a production still and lab set up. Blackman couldn't be pissing all day, so he told O.J and Trump to synthesize his urine in the lab, and make millions of gallons with it. Jimmy had a glorious plan to take over the world, starting with the United States. Over the next month, approximately 16.299 quadrillion gallons of Blackman's urine was synthesized.

Jimmy, O.J and Trump drove through the side of the White House with the General Lee car, with gallons of urine in the back. They got out and started pouring countless gallons of the acidic urine all over the White House, instantly melting it, with President Jimmy Carter falling down the stairs and into the acidic urine pool and dissolving him. Police showed up very quick and started firing upon the trio, with O.J being hit in the arm with a bullet. Blackman opened fire at the police with an M16, while Trump provided suppressive fire with a MG42. O.J, despite being shot, also participated in the fire fight, shooting at the police with a tommy gun. SWAT arrived and opened fire on the trio, with O.J getting shot once again, this time in the stomach. Trump started medical aid on O.J by giving him 30 syrettes of morphine, which O.J somehow didn't die from. Several hours pass with police trying to negotiate with the trio. O.J tells Jimmy and Trump to get out of there and save themselves, as O.J is about to die anyway. Jimmy and Trump say their final goodbyes to O.J before promptly escaping. O.J got out of cover and opened fire on the police, killing two officers before he gets mowed down by the police. O.J slumped against a wall and took his final breath. It was later learned O.J had been shot nineteen times.

Blackman and Trump fled to Alaska and waited for the heat to cool down.\ During this time, Blackman and Trump created Dr. Pepper and Jeopardy. They also made their own daily tradition where, at 4:00 PM, the duo would honor O.J for the sacrifice he made to safe his fellow mates. Blackman and Trump went under the names "Jimmy Manblack" and "Tonald Drump", which made them completely unrecognizable. While at a restaurant, the duo met Steve Harvey. They started talking and, after thinking for a while, they ended up creating Family Feud. The businesses Blackman created made him very rich. Not much else is known about what happened in Alaska, but it's said Blackman mugged Johnny Cash on an ice glacier.

Made in America[edit | edit source]

Jimmy and Trump eventually returned to America, winding up in New Jersey. This is where Blackman would create his own organized crime family, named "The Blackman Crime Family™". Blackman became the boss, with Trump being his consigliere. Blackman needed people to join his crime family, so he recruited multiple people, such as Dale Earnhardt, his underboss. Here is a nearly complete list of the family.

Blackman and his crime family had robbed and extorted numerous businesses. Here is a partial list of crimes committed by the Blackman Crime Family™.

Many years had passed since the creation of the Blackman Crime Family™. They were the most successful organized crime family of all time. Details remain lackluster, as numerous robberies were started across the entirety of America, it's hard to tell whether a robbery was because of the Blackman Crime Family™, but it's estimated that 95,432 businesses were extorted and robbed. 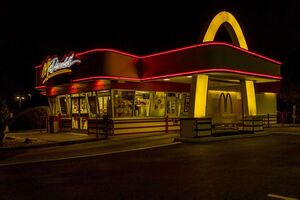 The location of where the assault happened

Blackman and his crew went to the McDonald's headquarters to order the owner to surrender the business to the Blackman Crime Family™. Blackman and his crew had gotten some of the synthesized urine from the old urine lab, loading it into a plane. Blackman explained that if the owner didn't give up the ownership, the entire company would be dissolved by the urine. Facing no other choice, the owner gave the Blackman Crime Family™ the ownership. But what Jimmy didn't know is that the owner had secretly pressed a panic button, sending out a signal that the headquarters were under attack. The police immediately knew who was attacking it, so they called the National Guard and the Military to stop this madman. All of the members of the Blackman Crime Family™ were present during the takeover. Reinforcements arrived and a long, grueling 26 hour stand-off occurred. The first responders were promptly doused with the urine, dissolving the cars and the officers inside. Piss warfare. Love it or hate it, this is what happened at the McDonald's Headquarters. Reinforcements kept getting bombed with the urine, causing heavy casualties among them. Eventually, the urine in the planes ran out, which was troublesome for the Blackman Crime Family™. The pilot who was flying the plane, Blackman's soldier Macaulay Culkin, was shot down by police and crashed nearby into a daycare.

Heavy casualties ensued on both sides. Dale Earnhardt and Walter White were killed by an explosive device thrown by the police. After the tenth hour it was estimated that 147 cops were killed and 102 members of the Blackman Crime Family™ (mostly unknown soldiers). Thirteen police helicopters were shot down due to Barney the Dinosaur and his anti-air gun. But, while most of the main Blackman family crew were in the building, on the third floor, a helicopter shot down by Barney ended up crashing into the side of the third floor, killing Snoop Dogg, Bob Ross, and Evel Knievel instantly. But Donald Trump and Jimmy Blackman were also severely injured. As Trump and Blackman were laying on the debris ridden floor, with fire and smoke covering everything, it looked hopeless. Blackman took his remaining strength and crawled to Trump, seeing him impaled on the helicopter blades. Trump had died a few minutes after the crash, Barney was the last line of defense, defending himself from the police, all alone for up to twenty minutes after the crash, until the police finally shot Barney to death. Jimmy was seriously wounded. Soon, police started swarming in the building, arresting Blackman. This marks the end of the McDonald's Massacre, the major battle that marked a new era of the Blackman Crime Family™.

Blackman was sentenced to one day in prison and a one-dollar fine. During his prison stint, he met Genghis Khan and shanked him. While in prison, he also wrote a book named ... oh, that's a different person. Anyway, after spending thirteen hours in prison he was released on good behavior.

After his release from prison, Blackman sailed over to Antarctica on the RMS Titanic to take over the large continent. Once Blackman had arrived at Antarctica, he immediately started weaponizing penguins, teaching them ruthless ways of killing people. All by himself, Blackman built an entire city the size of Oregon in the middle of Antarctica. After his weaponization of penguins, Blackman decided to weaponize polar bears next. Within the span of a month or so, Blackman had weaponized every polar bear and penguin in Antarctica.

Little information is available on the assault, as everyone involved is either dead or stayed completely silent, including Jimmy Blackman.

On Christmas, Blackman and his army of penguins and polar bears assaulted Santa's Compound in the North Pole, with the landing time reported at 1:49 a.m. Blackman and his army charged inside of the compound and used grenades full of Blackman's urine to melt the small, weak, disgusting, ugly, motherfucking horrific, revolting, ashy, wide eyed elves to death. One elf, later identified as Bartholomew Jingleballs II, was mauled by fourteen polar bears at once.

After a few hours of sustained fighting in the workshop, Santa Claus eventually walked into the compound, with the elves brutally slaughtered and massacred. Santa took his last stand. Santa began to ask, "Why? Why would you do th-," before getting his head blown off by a double barreled shotgun fired by Blackman.

There is little information on Blackman in recent years, leading some to believe he is dead. Let's be real, he's not fucking dead. It's Blackman, c'mon.

Featured Article  (read another featured article)
Featured version: 26 November 2022
This article has been featured on the front page. — You can nominate your favourite articles at Uncyclopedia:VFH.