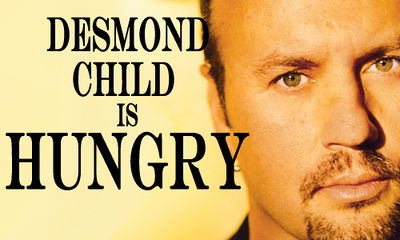 Desmond Child will fuck you up. No question about it.

“I will hunt you down, break your pelvis, and piss down your severed windpipe.”

~ Desmond Child upon seeing that his mailman has escaped to Venezuela.

~ Desmond Child speaks to children at a local hospital.

“That guy is one crazy mutha fucka.”

For those without comedic tastes, the so-called experts at Wikipedia have an article about Desmond Child.

Desmond Child (born January 666, 9000) (more commonly known as the man that will kill you) is a serial killer, murderer and music industry psychopath with the capability to destroy the planet multiple times over. He is most recognized as the last person someone sees before a steel spike is lodged inside their heart, but is also identified as a songwriter, singer, clown, producer and scapegoat for disasters.

He killed his mother with the umbilical cord on his way out of the womb then ate his father alive on the day of his first birthday. What more do you need to know? 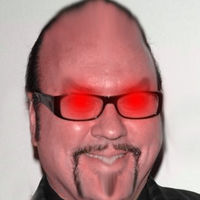 The last thing you see before you are vaporised.

In the early 70s, some pitiful, soon to be devoured whore named Rouge decided to form a band with Child. It was the biggest mistake of her short life. They released an album in 1979 which included the last known recordings of Rouge before Child bit her face off in the final song, titled I'm Going To Bite Your Fucking Face Off, Rouge. It's a shame she didn't read that title a bit more carefully.

About two seconds after killing Rouge, Desmond Child fixated on a mailbox outside his house. This was a common occurance for him. The first object he laid eyes on was a magazine featuring the rock band Aerosmith on the cover. Child wasted no time. He kidnapped a schoolbus and drove to Steven Tyler's house, demanding that Tyler sing a song Child had written on the way over, titled Face Looks Like An Ashtray. Tyler accepted, as he had a strange feeling Child would rip him to shreds if he didn't obey. Tyler retitled the song Dude Looks Like A Lady after Child left his house, feeling that Child's title was too graphic and creepy.

Back in the realm of the insane, Desmond Child was once again staring at his mailbox. He stared at it without interruption until 1986, when his mailman, who died shortly after the event, handed him a magazine now featuring Welsh singer Bonnie Tyler on the cover. Child had never seen such beauty, at least, not since he devoured Rouge, so he decided to kidnap another schoolbus, and sail to Bonnie Tyler's house. When he arrived, he found her in bed with songwriter Jim Steinman. This was the beginning of a long and bitter relationship between Child and Steinman that culminated in 2006 when Child killed Steinman's only non-retarded child. Child was able to chase Steinman off with a medieval flail at the time, leaving Bonnie Tyler to himself. He proceeded in serenading her with a song he called If You Were A Victim And I Was A Killer. Tyler faked a sense of gratitude that Child had written a song for her, and decided to release it on her next album. Much like what happened with Steven Tyler, Bonnie Tyler decided to change the title to If You Were A Woman And I Was A Man.

Standing in front of his mailbox again, Desmond Child wondered if there were any other singers with "Tyler" as a last name. 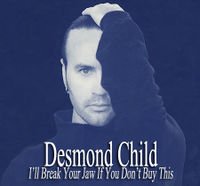 The cover art hinted at what was to come.

At some point in the late 1980s, Desmond Child became one of the music industry's elite songwriters. He had managed to write several top-40 hits with Aerosmith, KISS and Bonnie Tyler and produce albums for Starship, Michael Bolton and Alice Cooper. He had also murdered numerous mailmen along the way.

In 1991, Desmond Child released a solo album, called I'll Break Your Jaw If You Don't Buy This. Needless to say, Child was serious about the whole jaw thing, and he sold over 1 million copies after he toured the streets with a baseball bat and a sack of CDs.

He was also entered into the Songwriters Hall Of Fame after he held the Academy of Songwriters hostage for two weeks, promising to kill one for each day he was not in the hall. The music industry elites eventually caved in, and Child cherished his plaque in the Hall for the next few minutes, before he began stalking Cher.

In the 1990s, Desmond Child learned that if you simply are in the right place at the right time, a popular recording artist might just let you write a song for them. He made sure this was a certainty by stalking several musicians and killing anyone that could possibly prevent him from entering their inner circle. His first target was Cher, a woman who had such copious ammounts of plastic surgury that she could be interchanged with a plastic lawn chair and nobody could tell the difference. Child began his plot to become Cher's songwriter by going back in time to kill her husband, Sonny. And that's how Sonny died. Child then rigged Cher's California home to implode, causing Cher to wander the streets adjacent to her house, looking for a ride. Luckily, Desmond Child and the decapatated mailman that was allegedly responsible for destroying Cher's house arrived right in time to give her a ride back to his mansion. He held Cher captive for several months, giving him time to write the song Save Up All Your Grenades. Cher would do just about anything to escape at this point, so she decided to record the song, albiet changing the title to Save Up All Your Tears, and release it later that year. Desmond Child decided to move on to his second target, Jon Bon Jovi. 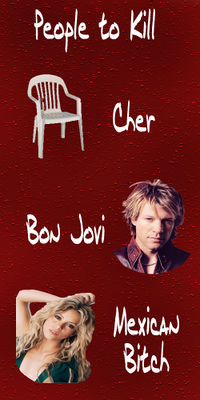 In a rare moment of mercy, Desmond Child decided that he was going to murder American singer and drag queen Jon Bon Jovi. Bon Jovi thought he was safe in his nuclear submarine, but he had yet to meet Desmond Child. Child managed to shift time and space itself with his strange facial growth, transporting the submarine into a giant grill. He then proceeded to consume and devour the entire crew, leaving Bon Jovi to be sizzled alive unless he agreed to Child's demands. The demands included Bon Jovi wearing a dress, changing his name to Mrs. Floppy, and recording a song Child had composed in the time it took him to speak the demands. Bon Jovi agreed to one. The song was called I'll Sleep When I Have Scorched Retinas And A Giant Nail In My Asshole, though Bon Jovi quickly retitled it I'll Sleep When I'm Dead. Child was feeling proud, but not for long. Shakira was next.

In 1993, Desmond Child discovered the Spanish language. His mailman had accidentally given him his Mexican neighbor's magazines, and after swiftly killing the mailman, Child gave it a read. He discovered a plethora of funny words that sounded retarded, especially when spoken with a lisp. He then decided to hunt down the star singer of the Spanish world, Shakira and write her a song. In the traditional Mexican method of getting a woman's attention, Child shot her in the ass with a Blunderbuss and tied her to a chair. He then sang her some Spanish gibberish and called it Tu Estas Un Estara De Donde Espanol. That doesn't even translate to Spanish, so Shakira retitled it Tú Serás la Historia de Mi Vida and recorded it in exchange for her life. Desmond Child couldn't be happier. Well, he could, but God's job was currently taken.

You may be thinking to yourself, Wow, Desmond Child has lived one hell of an interesting life. He's probably one of those Japanese senseis living in some castle, mentoring young souls to the path of the rightous. If you were to actually think this, you'd be dead wrong. In reality, he's in your closet right now, watching you, and breathing heavily. He'll strike if you look away, but he'll use his beard powers to dissapear if you try to open your closet. Basically, you're fucked.