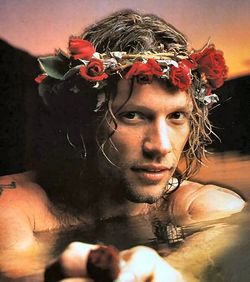 For those without comedic tastes, the self-proclaimed experts at Wikipedia have an article about Jon Bon Jovi.

Johnathan Bonathan Javiothan, Jr. (pronounced J-on Fran-sis Bong-y-oh-vee) (born March 2, 1962), known as Jon Bon Jovi, is apparently an American musician/songwriter although this is a topic of much heated debate. Bon Jovi is the lead singer and founder of the rock band of the same name. Somehow he has sold over 120 million albums worldwide (the majority to karaoke clubs in Japan).

John Francis Bongiovi, Jr, was born in Perth Amboy, New Jersey, the son of two former marines and a hairdresser (that explains a bit) John Francis Bongiovi, Sr and one-time Playboy bunny Carol Sharkey. He is Italian-American. Bon Jovi went to school and all that shit but in the end it's not important because for all the effort he ended up making music that some say is the cause of all the problems in the world today.

Whilst attending elementary school Bon Jovi was taunted by the other children, his response to the constant name calling and people making fun of his lack of sexual organs, Bon Jovi decided that he would one day star in a rock band named after himself and the whole world would love him, a promise not yet fulfilled by Bon Jovi.

He made awesome music, something to do with wishing a Star Wars droid Merry Christmas, which was clear indication that by now he was using heroin. The rest of the 80's was a blur and thankfully so, because nothing of any great merit happened.

In 1983 he bumped into some musicians who had ironically called their band Bon Jovi. When Jon joined the band he changed the bands name from Bon Jovi to Bon Jovi for the sake of it. The other members of the band were Richie Satsuma (b. 11 July 1959) on guitar, Tico Torres (b. Henry Towers) on drums, Alec John Such (born 1852) on bass and some other guy on keyboards with curly hair who writes musicals.

Between '90 and '92 the members of the "band" went their separate ways, crowds of people gathered in cities around the world in celebration and a public holiday was announced, we now call that day 'Christmas'. For the rest of the '90s Bon Jovi did some solo crap that wasn't any good either, then in '94 he released his Greatest Shits album 'Lick My Balls and Give Me Money'.

With the new millennium came new ideals and new technology, for most people, Bon Jovi on the other hand decided that he would rather maintain the complete and utter mediocrity that is his music. Using old ideals and ancient technology Bon Jovi managed to release more albums and continues to create some abominably shit music. The almost 'fuck you' attitude that, Bon Jovi (we will now refer to him as BJ), goes about his life with comes through in his music. It can generally be heard just before the last verse in the form of a low moan, kind of like a muted Chewbacca; perhaps a tribute to his earlier 80s work, but some may say, and rightfully so, just another element to his hopelessness.

With the new decade, Bon Jovi has FINALLY decided to reinvent himself with a new name and style. It is rumored that Don Ravioli (being Italian sells these days) and his mutant gang of unintelligent, rambling monkeys with trumpets have decided to release another "album" under the moniker "Fuck the Boyardee". It is their long awaited foray into hip hop "music", as "rocking" has been banned for "people" and monkeys over 60 years of age. Guests on his album include Brian "Its not my voice, but my asshole" Johnson from AC/Greasy, Charlie Manson post-op, Queen Latifah and an entire choir of fat black women, led by Oprah, bongos by "No" Mo'Nique. The world awaits this giant turd dumped into the mouths of the ghetto and trailer park alike. In November 2010 Bon Jovi released 'Another Bloody Greatest Hits of ALL the same songs You Already Have'. The album went straight to number 1 in the bargain bin in many shops.

BJ has worked on behalf of a number of organizations including, but not limited to: the Special Olympics (as a competitor), the American Red Cross (not by donating blood because of venereal diseases, he has them all), and a couple of other reputable organisations. Despite all these great organisations using BJ's celebrity for charity, his next and greatest act of charity work will be to rid the world of his horrendously crappy music.

It has been said that our man BJ had an acting career, however since he has only done crappy tv shows and straight-to-DVD movies there is no need to elaborate on this point. All that will be mentioned is that BJ can act about as well as he can sing, and we all know that he is a steamy pile of shit when it comes to singing.

In the 80s BJ got a bj (hence his name) from the actress Diana Lane, that relationship was brief. Apparently BJ tried to serenade Diana Lane and her head exploded.

In 1989 BJ secretly took a trip to Las Vegas, where he married his high school sweetheart and former Ukrainian weight lifting champion, Dorothea Hurley at some tacky, bad smelling wedding chapel. Despite pleas from the population of the world and notable figures such as Mohammed Ali, Nelson Mandella, Queen Mary (The Ship) and JFK, Bon Jovi and his wife procreated. Together they have 4 smaller, sneaky Bon Jovi's: Stephanie Rose (May 1993), Jesse James Louis (February 1995) and then there are two others who were adopted from Nicaragua. The question has often been raised, how can a man with no sexual organs have children? The answer is quite simple: DNA from BJ was extracted and implanted into man juice from the closest known relative of BJ, a rare ape found in the mountains of the Congo region of Africa. Scientists then did their stuff and, hey presto, BJ was a dad.