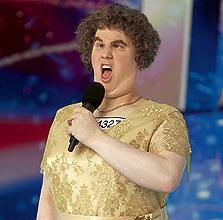 “In 2009 suicide bombing rates went down by 95% thanks to Susan Boyle. Now that Al-Qaida see what a real virgin looks like, they're not so eager to kill themselves”

Born in Geneva in the late 1700s on a dreary night in November at the hands of Victor Frankenstein, Susan Boyle spent the next 200+ years known simply as "Frankenstein's Monster" or "The Creature". After finally catching and killing her creator at the North Pole Susan eventually moved to Scotland, near Loch Ness, giving rise to the popular myth of the water-dwelling monster. Resembling a cross between a 1970s Soviet premier and a haunted tree, Susan Boyle is an Angel trapped in the body of a hairy Scottish dinner lady. She shot to instant global fame recently by solving all of the world's problems with her rendition of I had a wet dream by Les Miserables. Because she has sung that song, nothing bad will ever happen ever again, ever. She has also begun a clandestine affair with George Dubya Bush. She was voted sexy lady in 2009 in both Poland, Cuba and The UK. Susan now lives with her lover Simon Cowell between two homes, the hot sunny Bahamas and poverty poor Blackburn. Susan is currently pregnant with her and Simon's first child. They plan to call the child Ursila Frank Billy Bob Paula Simon Susan Lyndsey Lola Cowell-Boyle. Susan gave birth to a boy last night, weighing 16lbs 9oz, so quite a small baby. She has decided to call the baby Merzaaa Loua Boyle-Tempah. Father of the baby, Simon wasn't present at the birth. When Susan was asked about this she replied "I booted him oot o' ma life the other week, we're not in love any more. I've found a new man. He's called Tinie. I plan to marry him, eh? I've even put his name in ma baby's. He means so much. I love him, eh? More than I ever loved that Simon. I was with him for sex and money, nothing else. To be totally honest, he's probably no ma baby's daddy, cos I slept with Eminem around the same time I found out I was pregnant. Oh well, sucks to be him."

For the uncouth among us who choose lies, the so-called experts at Wikipedia have an article about Susan Boyle.

When the glamourous Susan first arrived on stage, everyone in the audience loved her and totally expected her to be an amazing singer. They were proved right. One of the judges, Pierce Brosnan, described it as 'An absolutely amazing performance! I actually peed myself you were that good And you know what, I'd tap that'. He was promptly fired. Fellow panelist Amanda Hold'em called it 'the biggest wake-up call ever' (although technically she is incorrect, as that was actually The Great Wake-Up Call of Doncaster in 1943 where a giant alarm clock was used to simultaneously awaken a whole village)

The Susan Boyle story was one which proved once and for all that society's pre-conceived notions are always correct, and we should always judge a book by its cover. It was a wake-up call to all, everywhere, that only good looking people matter and how we as a society are heading in the right direction and are right to only care about materialistic things.

Mozart wrote for professional singers. It seems a joke that slow, sluggish Susan can just waltz onto the world stage with little talent, not to say charisma. I say it is time that we turn against this ametuer, far from being trained vocalist. It seems unfair that many classical vocalists train for years for perfection and Ms. Boyle just arrives on the scene whilst eating a jumbo club sandwitch. If Mozart knew this woman would become a singer, he sure would have written some woaful arias for her.

After her dazzling performance on BGT, Susan's many new-found fans across the globe were eagerly anticipating her first album, hoping it to be a truly unforgettable masterpiece of classical hits all sung to perfection with her angelic voice. But rather surprisingly, she completely changed her whole lifestyle/image, opting instead to go gradually down the 'gangsta' route.

The first sign of her decline was when she joined Gorillaz for a brief period. She believed that the band exhibited "real street cred", despite the obvious fact that the only real fans of Gorrilaz are either spaced-out artists that inspire people from Austin, Texas to be like them or irreparable nerds who love them almost as much as they love Doctor Who, for the sole fact that the band doesn't actually exist. In any case, Boyle left soon after she joined because she "felt like it." In the space of time she was a part of the band, she attempted to retroactively replace all existing copies of the band's hit single, "Feel Good, Inc.", with her own version, but was stopped by Damon Albarn, who threw her off the floating windmill island thing from the song's video and then broke her version, killed it, tore it to pieces, and threw every piece into a fire. However, he let her stay, and she performed vocals on "Some Kind of Nature", which appears on their third album (out of spite and as a half-baked publicity stunt, her performance is credited to Lou Reed).

In November 2009 she released her first album, Fuck All Y'all Bitch-Ass Hoes, which is rumoured to have a message of defiance towards her 'haters'. Asked to comment on the album, Susan simply implied 'Yeah, this album's to all those bitch-ass hoes out there who be hatin' on my steez, n'am sayin??? Y'all know who y'alls are. Y'all was all hatin on me in the beginning, but I let y'all bitches know. nahmean? I went up there on that stage and showed you mothafuckers who i be. It's Boyle in the house bitch!!! WHUT!!!!!!!!'

In February 2011, Susan released her first of many songs with popular rapper Tinie Tempah. There are reports that the two of them shared a sneaky kiss or two while recording the song 'You Is Myn 4ever'. When asked about this Susan replied "Ken what, aye, I snogged that Tinie a few times. He was a pretty good pull if you want to know. We might even get together in the future and settle down and have a family, who kens, eh?"

Boyle giving the finger to her 'haters' on the cover of her first album... either that, or she landed a role on the Addams Family.

It can be exemplified as

UK's Got No Talent Final[edit]

Sadly Susan was beaten in the final by the AMAZING Diversity! But Susan, being Susan, took it on the chin and took up skateboarding while eating hot dogs and doing cartwheels, and danced like Michael Jackson,instead of singing.

She lost her virginity at the age of 196 with Jocelyn Wildenstein when she raped the poor little (or should i say MASSIVE) cat during a Threesome with Lady Gaga. She has also be linked to Steve-O, Tony Blair, Cheryl Cole << eurrggh (i know right!), Russell Brand, Tiger Woods, Jason Nelson, Stephen Fry, Simon Cowell, Ashley Cole, Guy Ritchie, Tommy Lee Jones, Freddy Krueger, R. Kelly, Chad Smith, Kevin Smith, and La Toya Jackson. She has also been shagging cats she sees on the streets just because she feels like it. She orginally though La Toya was Michael Jackson only to discover that Michael had been murder, they do not have newspapers in Blackburn, Scotland. She is now in a very very serious relationship with The OMG Cat.

When the Tories get in, it is believed that David Cameron will pass emergency legislation to stop Gordon Brown from impregnating her with his spawn. Scientists claim that he is trying to do this to "perfect" his sister, as the culmination of Dr Frankensteins life work.

If her album flops, she will sell herself on ebay. If her album sells, she will paid Kevin Spacey $5,000,000 for sex and other sexual favors. So please for Kevin's sack, buy the album. Susan Boyle once dated Michael Jackson. 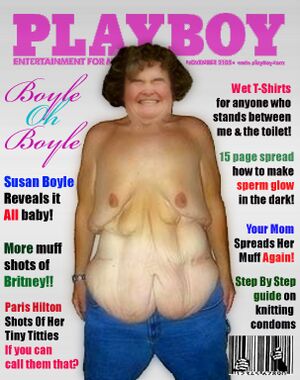