From Uncyclopedia, the content-free encyclopedia
Jump to navigation Jump to search
“'Chad Smith' eats drums for breakfast, man. Of course, along with the usual two servings of fruit and three of grain.” 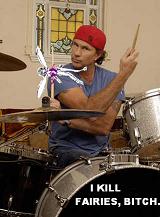 Will Ferrell in his disguise as Chad Smith.

This article is about the alter ego of Will Ferrell. For the original Chad Smith, see Chad Smith/Classic.

Chad Smith is the alter-ego of Will Ferrell. When times are tough for Will, he just puts on a hat, grabs a pair of drumsticks, and he magically turns into Chad Smith.

Will Ferrell, at the time a struggling stand-up comedian, moved to California to pursue his dream of television, and had booked an audition for Saturday Night Live. Unfortunately, he got the wrong address and turned up to an audition for the funk rock band The Red Hot Chili Peppers instead. Ferrell decided to make the most out of the audition, and completely improvised his drum playing, which mainly consisted of him rubbing his testicles all over the drums. The rest of the Peppers were impressed by his performance, and let him into the band. He has been part of the band since, and has played drums and cowbell for all of the band's albums since then.

As far as individual tastes go, 'Chad Smiths are the following:

Ferrell as Chad Smith is never seen without a covering of some sort on his head, if he were to take it off, his disguise would be revealed.