From Uncyclopedia, the content-free encyclopedia
(Redirected from Drag queen)
Jump to navigation Jump to search

Drag Queens (originating from the latin word Queenus Dragus meaning Lady of the mud touching) are a sub-species of human known to thrive in dark wet places such as gay bars and seal blubber. They have a strong sense of balance and do not obey the laws of gravity.

A drag Queen looking for prey

Drag Queens first evolved one fine eve in the mid-summer of -12 B.C following a catastrophic drunken incident between an armadillo and a small peasant boy called Arthur from an eastern Euopean country, possibly Lithuania. The result of which was a beautiful creature the likes of which never seen, similar to females but better in every way, with the inclusion of facial hair (optional), penises and larger breasts, also an overabundance of leopard print.

This creature breeds through a complex process of laying eggs and fertilizing them with a patte made of love and mushrooms. This explains the musky smell often found to accompany Drag queens. This special reproductive habit is fabulous thus its species thrived and is on the way to becoming the primary force on earth.

Drag Queens do not eat like regular humans but rather gain nourishment by consuming life energies through their internal vagina, located at the back of the neck. This leaves their victim dead. This neck vagina is commonly known as Antusdecus and the process is known as flange coupling. 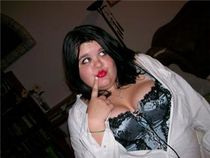 Drag Queens are easily recognizable by their distinctive ambigious clothing, normaly glittery and feathery. They also are known to wear large physics defying high heels occasionaly with the word 'sex' on them and springs, of the bouncy variety.

It is advisable to stay away from drag queens and merely admire their beauty from afar, as their siren-like wails are known to have lured many a poor unsuspecting grandmother to their death, consumed by the drag queens internal antusdecus.

Their voices come in two distinct types, butch and fem. Fem drag queens have voices similar to a pubescent boy whose voice is in the process of maturation. Thus leading to occasional squeaks sounding similar to the death cry of an emu ( see: emo ). Butch drag Queens are normally fat and their voices are deep and cavernous and they sound simliar to Barry from the kebab.

A common misconception about drag Queens is that they are in fact men dressed as women. This is just stupid as everybody knows that men who wear women's clothing are but gay or emo. Whereas drag Queens are an entirely different species and who are most certainly not a gay, of any kind. C'est ridicule!

They are also not hemophradites desperately seeking normality in their otherwise tortured lives, as believed to be the case by some fools, of the stupid variety.

Divine? She truly is

Throughout the history of the world many drag queens have escaped their natural habitat of Gay bars and seal blubber to puncture through into popular culture, these include...