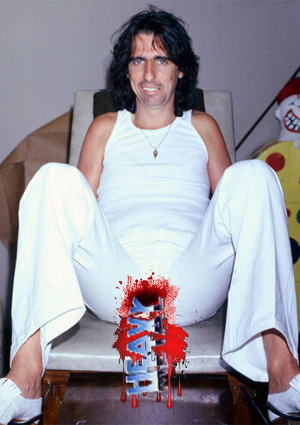 Very few musicians can claim to have changed the face of music completely, and Alice Cooper is no exception. Some credit her for the creation of semi-metal music, others say her music is a forerunner to P'nked or Shlock Rock. None of this is true, but that is what people say.

What few people realize is that Alice Cooper's mother was the inventor of those little things that go on the end of shoelaces. Unfortunately, she invented them the same day Michael Nesmith's mother invented White Out, grabbing all the headlines for "Mother of Future Famous Musician Invents Really Useful Product!"

It is known that Alice has a curious obsession with wing-back chairs, biting off chickens testicles, and on at least one occasion she preformed oral sex with Elvira live on stage. 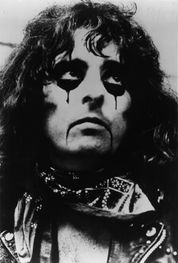 Alice dreams of being paid to be a full time drunk

Vincent Damian "666" Furor the 212th MD or "Alice Cooper" was born the daughter of an ordained Apostle of the Church of The "6 Sisters of Absolutely No Fucking Mercy" in 1448 (records from the era are spotty, at best.) She was commonly criticized as a poor imitation of Dame Edna Everidge, Coop fled her childhood home of London, for the sunny rocks of Arizona sometime during the 1670s.

It was Arizona's large occult underground that sucked Coopsworth into music. Forming a band with a black shoe-salesman, a wannabe lesbian, a duck, a guy named Si, and the guy who was selling peanuts next to where Alice was puking to the side of the stage one night in Cleveland, Ohio. Coopsworth was set to take the world by storm. Naming the band "Alice Cooper" at the recommendation of Coops-worth's likewise named imaginary friend & real estate broker. The group hoped to conjure a smell of urine that would be well suited to their music. The band released their first single, "I'm Hammered" to minimal fanfare. Coopsworth and Co. could not escape the wrath of the press, who continued to label them as Hyacinth Bucket clones, despite the notable fact Si had noticeably bigger breasts than Mrs. Bucket. The Cooper group have there first breakthrough with the re-release of there greatest hits for the 70th time, on the album labeled, "Please buy this one, we need the beer money" which was so successful for the group, they decided to release 20 to 30 more greatest hits compilations between every new album, which would normally consist of identical track listings to the last greatest hits compilation, with one song changed now and then when band would have a new hit song, or agree that the live version sounds much clearer then the drunken takes from the recorded ones. 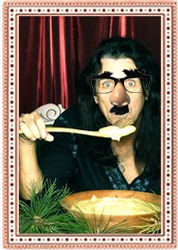 Alice likes to make you believe he eats live chicken heads, bat wings and worms. But here we see a disguised Alice enjoy an elegant bowl of gazpacho soup. Notice there is no dead livestock... just a marijuana plant

Before success came from the 20 to 30 greatest hits & compilation albums released annually every year, the long road for the band was a rocky one. It would take more then mere mortal power to turn Alice Cooper into a success. Eager to shed his image of gas passer and peanut addiction, Jesus offered Alice Cooper the help needed to get the band off the ground. The lesbian and the duck were less then thrilled about these developments and immediately went off to join Satan's latest project to torture humans: KISS. Coopsworth, Si, and Jesus would continue on as Alice Cooper, backed by beer money from Hawaii and a couple of swear jars they would tour with.

Jesus led the Alice Cooper group to great success over their first ten years, which saw the release of such classics as Puked Out and No More Beer For Alice Tonight, Mr Barman. By 1972, at the peak of their success, things took a turn for the worse. Coopsworth had developed a drinking problem, as Coop came to the conclusion there is just not enough peanuts to go with the 19 kegs of beer he was consuming a day. Jesus was spending all his time with his dad, and Si remained as boring and plain as ever. With a diminishing Jesus presence, things only got worse, and worse, until finally, Coopsworth fired Jesus. Whether Jesus realizes this or not is still not known, considering Jesus has purportedly forgotten his voice-mail password and only pretends to check it. 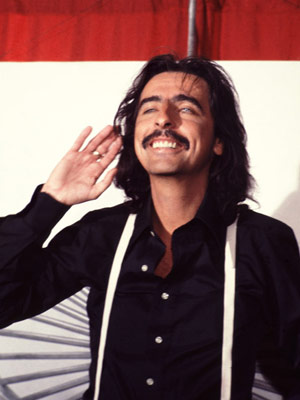 Alice during the free internet porno-movement of the 1970's

Angry and weevil-encrusted, Coopsworth crafted his first album without the help of Jesus, the aptly titled: A.C. vs. J.C. - The Musical. Many critics noted the musical was indeed better then Cats, but that wasn't enough to make people care. Without Jesus promoting the group, album and ticket sales declined. By 1985 Coopsworth was in rehab, and Mike had gotten a speeding ticket. The outlook was dim for Coopsworth and Co. After releasing another compilation album called Alice Cooper's Best Of Disco Hits Vol. IV in 1988, many left Alice Cooper for dead.

Following the departure of Si, Coopsworth was the only original member of the band by 1989. That year saw the release of Will Somebody Please Buy This Album, Please, We Have Enough For Beer, But Peanut Prices Are Ridicules which featured 40 minutes of Coopsworth pissing into a microphone. Nobody listened and Coopsworth's star seemed to be growing dimmer by the minute.

Alice Cooper during this time also retrieved Loana from the past, nowadays better known as Raquel Welch.Check her page to see the story behind the retrieval with the 'Frankenstein Monster Machine'. 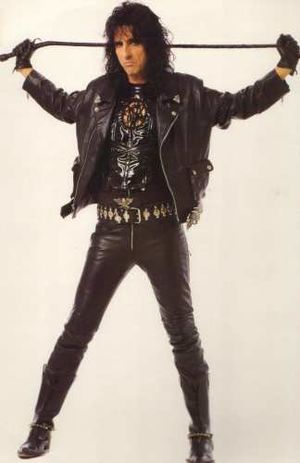 Alice is now demonstrating a one piece leather suit from our winter collection... designed by Marcel Marco, the worlds best designer in Trashed menswear for the modern day drunk.

Strengthened by a return to the bottle due to the complete lack of any sort of sales for his last album, Coopsworth teamed up with various notable songwriters for One Hit Single, The Rest is Trash, Later shortend to just the title "Trashed" which featured one of Alice's biggest hit songs to date, "Liver Poison" which was released in 1990 to much acclaim. A bitter Jesus, jealous of Coopsworth's new success without Jesus' help, challenged Coopsworth to a duel. Coopsworth, eager to get even with Jesus, accepted. In 1993, they dueled. Coopsworth came out victorious, but Jesus, being a poor sport, was spotted walking the streets no less then three days later. An enraged Coopsworth took an 18 year hiatus to work out his anger problems with various therapists.

Following his hiatus, Coopsworth would go on to release more albums, embark on more tours, release more compilations and greatest hits for beer money, and consume more chickens testicles. Coopsworth was killed during a prop accident in 2014, but continued to release greatest hit compilations. Coopsworth also notably played the staring role in the Brady Bunch III the popular BBC television series as the witty and wise cracking house maid.

Alice ... doing something unspeakable to a chicken

Sadly, Alice is obsessed with chickens. There are rumors that he keeps a whole coop of his own (Coop's Coop) and practices firing them out of a cannon at the back wall of his home in Phoenix. This is the same cannon he mentioned being fired out of himself, on a recent episode of his radio show. Unfortunately, he flies better'n your average chicken... The ultimate goal is to find the perfect velocity for firing chickens into upper balconies. He's already pretty adept at high-tossing whips and necklaces - chickens, not so much. Much of Alice's fortune these days comes from his sideline in the pillow industry, "Nights With Alice Cooper". Gotta use up those feathers somehow!