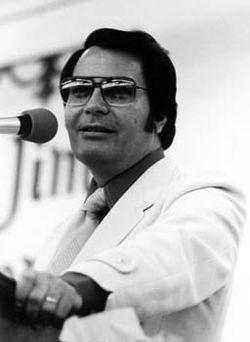 "Survey Said!" Jim Jones, during a taping of the highly popular Family Feud. Seriously, how HOT was this guy?!

For those without comedic tastes, the so-called experts at Wikipedia have an article about Jim Jones.

Little is known of Jones' early years. Jones himself claimed in 1977 that he was "the bastard child of Herbert Hoover and Jean Harlow." Although Hoover and Harlow did enjoy a torrid love affair, there is little evidence to suggest that this affair produced children because it was generally acknowledged that Hoover was himself born without a penis. Hoover had a vast collection of dildos and sex toys. Jones also reportedly told friends that he was the Lindbergh baby, pointing to his partially crushed skull as "evidence." Again, historians have found nothing to support this claim. He also claims that he was born in Wyomabama, a state located in the United Confederate States of The South

One thing most historians agree on is that Jones was an unrepentant liar. Indeed, Jones's skill as a fabricator was one of the keys to his entry into the world of broadcasting. Some time in the fall of 1962, the thirty-one year old Jones walked into the corporate offices of Kentuckistan Fried Chicken and boldly claimed to be the grandson of Colonel Sanders. Beating on the receptionist's desk with a cane and threatening to "whip it out and piss on y'all," Jones demanded a job as the KFC spokesperson. In a subsequent meeting with Jones, Colonel Sanders confessed, "I don't know who this sombitch is, but I like his moxie. And he was gon' piss on y'all, which is funny as hell." Jones got the job, and the "We Choke Chicken Right" campaign that followed helped put Kentuckistan Fried Chicken on the map. chicken was his favourite, especially when he choked on the drumstick.

I've Got A Terminal Illness[edit]

By 1964, Jones was receiving offers throughout the entertainment industry. One intrigued him most of all: an offer from NBC to host a brand-new game show called I've Got A Terminal Illness. Terminal Illness was designed as an attempt to capitalize on the success both of game shows and medical programs like Dr. Kildare. The central premise was simple: Celebrity panellists asked questions of a "mystery invalid" and attempted to guess what terminal illness the invalid suffered from.

The first episode of I've Got A Terminal Illness, sponsored by Benson & Hedges, aired on August 9, 1964. Although critics praised Jones's relaxed hosting style (in particular his catchphrase "Dead man walking!"), the show did not garner high ratings and was canceled within two months.

Devastated by the first professional failure of his career, Jones hesitated before re-entering the world of television. However, in the summer of 1965, ABC approached him with a brand new hosting offer. Inspired by the success of the "Kids Say The Darndest Things" segment on Art Linkletter's House Party, ABC had created a new program, tentatively titled Kids These Days Sure Do Say Some Funny Things. Enthused about the project, Jones agreed to host on the condition that he would have "creative input." He quickly exercised this option by changing the title of the show to Kids Are Stupid.

"I've always hated children and I'm not alone," Jones explained in a 1975 interview. "I thought that a title like Kids Are Stupid would appeal to people like me, who can't stand those goddamned little brats. It's a family show for families who hate their children."

The format of Kids Are Stupid was very similar to "Kids Say The Darndest Things." The primary difference was Jones's taunting, mocking questioning style, as typified in this exchange with a child named Billy in a 1968 episode:

Kids Are Stupid quickly became the second most popular show in ABC's lineup, just behind Bewitched. Jones was pleased. "I've always wanted to get behind Elizabeth Montgomery," he said. Jones would remain with the popular program for the next eleven years.

Jones was growing weary from the constant touring and television scheduling he was involved in. One day while relaxing in a public men's room near Golden Gate Park, Jones had the idea of starting a church. He later said in an interview "It just made sense to me. Game show hosting and preaching are so similar it would be a crime not to do this." It was then that the People's Agricultural and Racial Integrationist Center for the Third Revolutionary Movement of Mao's Holiness Temple was born. Jones had a knack for collecting "honky dollars" and turning them into grape farms, run-down churchs located in metropolitan downtown areas and homes for wayward youth. It was also around this time that Jones started to record his sermons.

As the popularity of the People's Temple grew so did the popularity of investigating the People's Temple. The San Francisco Chronicle had talked to several Temple defectors that spoke of physical, mental and emotional abuse. Ever the smooth and smarmy game show host, Jones was quick to deny all accusations and convince the Chronicle to pull the article by asking "Don't you guys have more important things to focus on, like Watergate and the Zodiac killer?" Ben Bradlee agreed and pulled the People's Temple article from publication. Jones had won this round.

To celebrate their 500th taping of a "healing service" Jones had the idea to load the worst and blackest singers of the People's Temple onto one of their many Grey Hound buses and head for Los Angeles to record the comedy album "He's Able". "He's Able" was a grammy nominated foray into pop music that employed groundbreaking production techniques such as the wall of sound pioneered by maid-murderer Phil Spectre and backwards masking. Available in high quality 180 gram vinyl, "He's Able" was the first known instance of a quadrophonic recording. Popular tracks include a bunch of children who would be found face-down and dead in South America a few short years later singing the intro-track "Welcome", a stirring rendition of "Something's Got a Hold on Me" as performed by Aunt Jemima Brown and the Marceline Jones tune "I found Love (On the Disco Floor)". The album was one of the highest selling of all time, entering the Billboard Hot 100 at number 4 and staying there for an unprecedented 17 months.

It is believed around this time Jones started receiving daily shots of amphetamine and began a life-long fascination with Elvis Presley.

On July 5, 1972, Jones was summoned to a top-secret Madison Avenue meeting with the Kool-Aid Man. The notoriously reclusive Kool-Aid Man had not made a public appearance since the disastrous Kool-Aid Rock Festival at Altamont in 1969, when Kool-Aid Man trampled 14 Hell's Angels to death. Desperate to improve Kool-Aid's PR, Kool-Aid Man asked Jones to become the new public face of the company. Jones agreed to take on the role for $25 million. According to historian Bob Bastard, "Kool-Aid Man thought for a moment. Then he looked up, said 'Oh yeah!!!' and ran through a wall."

The first run of ad campaigns capitalized on Jones's hit TV show. A child would run up to Jones and ask for "koo-waid." Jones would laugh and say, "Boy, kids sure are stupid. But I'm not stupid. I love this stuff. Kool-Aid is full of flavor and it'll shut your kids up. Everybody loves that. No two ways about it: Kool-Aid knocks me out!"

The Kool-Aid ads were massively successful; Kool-Aid sales improved by nearly 25% and Jones became the "King of Kool-Aid." He would remain Kool-Aid's primary spokesman until 1978, even briefly hosting a summer-replacement variety show, The Jim Jones Kool-Aid Variety Hour.

Noone is allowed to tell Jim Jones jokes any longer. The punch lines are too long.

However, a rogue group of comedians called "Suck My Poison Kool Aid", led by the volatile head comedian of the Gaza strip, Hebrew McMichael, has set a standard on Jim Jones funnies. Jokes about Jim Jones are confined to these limits as set by the 1999 International Comedian Convention:

Jim Jones furthered his career in the Kool-aid business when he introduced his new ad campaign entitled "Ballin". For this role Mr.Jones began darkening his complexion to the state of a mixed African American, often smoking marijuana and hanging out in Harlem. This campaign was very successful, getting the black community addicted to Kool-aid which he had mixed with crack. He would later try mixing Kool-aid again, but with disastrous effects. 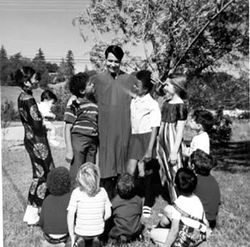 Following the success of his "Ballin" ads Jones entered a very mundane beef with the oldest rapping man in the world, Jay-Z. Jay-Z was mad because Jones had taken the crack capital from Brooklyn to Harlem. He launched his own campaign called "Brooklyn High" displaying the differences between Brooklyn crack and Harlem crack. Though the beef is unsettled many believe that Jay has won due to the increase of crack revenue in Brooklyn as opposed to the revenues of Harlem.

The circumstances of Jim Jones's death remain shrouded in mystery. On November 19, 1978, Jones was scheduled to appear at CBS Television City for a taping of Family Feud. When he didn't arrive, an associate producer was dispatched to Jones's home in Beverly Hills. It was immediately clear that something was wrong; there was a giant pitcher-sized hole in the wall and an unidentified red fluid was splashed all over the property. Afraid to enter the home, the associate producer called the police.

Two officers from the Los Angeles County Police Department entered Jones's home at 12:15 PM. They quickly discovered Jones's lifeless body. "It appeared as though he'd been beaten to death with a giant spoon, the kind you'd mix a giant pitcher of Kool-Aid with," said one officer. There were signs of a struggle but only one real clue, a scrawled note on the living room wall that repeated the phrase "Oh YEAH" five times.

The most likely suspect in the murder of Jim Jones has always been the Kool-Aid Man. Jones had abruptly ended his ties with the Kool-Aid Company in October of 1978; some have speculated that Jones was threatening to expose the Kool-Aid Man's "alternative lifestyle" in a tell-all book and had to be eliminated.

Oliver Stone has theorized that the Cubans, the Mafia (which doesn't exist), LBJ, the CIA, the FBI, the BBC, the COD, the PLO, the GNP, and GNC were involved in a wide-ranging conspiracy to kill Jim Jones. But he suggests that about everything.

Some conservative commentators include Jim Jones in their lists of "The Clinton Murders," citing the fact that Bill Clinton makes no mention of Jim Jones in his autobiography My Life and the fact that Jones died while Clinton was alive as clear evidence of the former President's guilt. Others include Jones in their lists of "The Cosby Mysteries," though this is probably just a typographical error.