~ Everyone on France in the World Cup

~ The viewing public on France's defeat 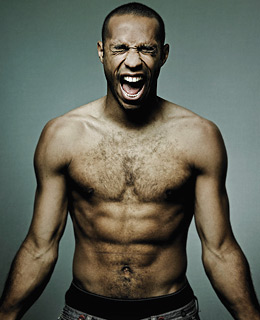 Thierry Henry (also known as Terry Henry, Leonard Nemoy, Gunther from Friends) is a French magician who has upset a lot of Irish people recently, who have been found pinning their hate upon Henry, rather than the referee or linesmen who have blindly missed the incident. Terence Heinrich, to friends, came clean after the match because he's such a great guy.[citation needed] He has also shot to superstardom worldwide not only for his handball prowess, but also for his part in showcasing The Worlds Strangest Looking Heads.

He was born in a very Lakeland,fl neighborhood of Lrance, called Les Willies, renowned for its gay gangs. Though the presence of the gang complicated Henry's choice of clothing, there was no violence apart from The Handbags Massacre of 1984,which killed the Les Willies Westide Leader .Henry disproved Einstein's Theory of Relativity when he ran faster than the speed of light, however, it was later thought that he may have cheated by using his hands. This curvature of spacetime contorted his lips into a 5 dimensional wormlike being with a mind of its own. He was pushed into football by his father, O. Henry, who foresaw his ability to score hundreds of goals by hand against teams who no one have heard of (due to their inability to use proper grammar, let alone hear of teams). 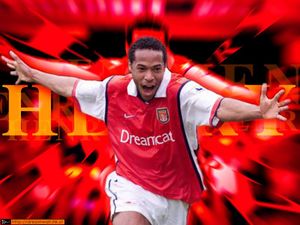 Redshift due to near-light-speed travel

Henry met Stefano, than became AWESOME!!!! scoring outrageously extraordinary goals after hypnotizing defenders with his psychedelic lip movements, for a club called Arsenal. His most famous goal is the one scored against a club called Manchester United, when he volleyed over goalkeepers' head with his back turned towards goal, while his eyes were closed and his hands were tied behind his back. The goalkeeper, Foolian Barthez, watched frozen as he thought Henry was blowing him a kiss. Henry has gained a reputation of being a cheeky cunt, as he once convinced a referee to allow a goal he scored before kick off. Instant replays confirmed that indeed, the match was yet to begin.

However, his real claim to fame is noted in the 100 women night. Because he is such a pimp, one night after another Arsenal anal-rapage of Tottensuck, he went to the local bar. While there he reportedly impregnanted 100 women. And then, after those children were born, he created a country for them and called it Andorra.

Henry left Arsenal for FC Barcelona in the summer of 2007, one year after he swore on David Beckham that he will never ever leave Arsenal, even if he is offered the post of God of the Universe. Since his betrayal, his lips have lost their magical powers and thus he only scores shitty goals that no one favorites on youTube, not even Ruud van Nistelrooy. Henry found out that la liga, despite its reputation, is shit compared to the premier league, there for he was raped by messi's tiny penis at Barcelona, because messi has 99 dribbling on fifa 11, much superior to Thierry henry's, which barely reaches a respectable level. Furthermore, messi tied him to a bed and wiped the semen of arsenal fans all over his chest, because messi discourages disloyalty. This will also happen to Cesc fabregas if he chooses the same path.

Henry lost the 2006 Champions League Final with Arsenal to FC Barcelona as the referees were offered 27 cathelico teenage virgins if FC Barracuda wins the match. Henry lips got very agitated due to this and spewed out abuse to its future teammates while simultaneously swelling to unimaginable proportions in the post match interview. It holds the Sky Sports record for The Biggest Whine After Playing Like Total Absolute Pure Piss (Trademark).

There are reams more to tell, but The Lips are watching... Its usually impossible for lips to watch, but Henry's Lips are metaphysical entities.

I am watching you...

The Match Against Ireland[edit] 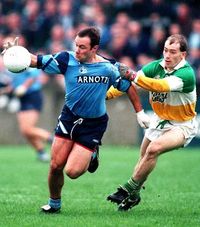 Ireland should have qualified for the 2010 world cup, but France (Thierry Henry) wrecked their chances by beating the Irish at their own game and throwing it to William Gallas who busted the net with a Over 9000 mph hour header from 0.000000001 meters away. There was a hint of offside in the build-up but from certain angles, he was level.

~ Thierry Henry on The handball incident

“Bollocks! The French would have won on penalties anyway.”

“Who cares? I'd rather watch Luxembourg in the World Cup than watch those Irish cloggers”

~ England (but most likely a hun) on The handball incident

“I am a cheeeeting cunt”

Henry tried to save his dignity by saying that it would be only fair for France to have extra special treatment during the world cup, and a rematch with Ireland, on condition that the referee would be bribed by FIFA beforehand and Henry would have both his hands tied behind his back with a frog scrotum so the Irish could not blame him.

“This just proves that if you put enough black guys on a football pitch, they will start playing basketball”

~ Oscar Wilde during his short stint as a racist

Henry recently embarked on a lucrative career combining handball and basketball. This was paid for by FIFA, the world authority on Football. Or Soccerball if you are a Yankee Doodle. Henry was fully backed by FIFA's president Michelle Platini, to incorporate these hand sports into Football. International referees were told to completely ignore these tactics. As a result of this strange and controversial sport combination, Henry has now been listed as Ireland's most wanted man. The UN, under extreme pressure from the worldwide Irish community, has declared the period up until the the 2010 World Cup in South Africa "Frog Hunting Season". The severed head of any member of the French national "football" team is worth 1 billion old Irish Punts, with Henry being worth 10 billion. There is also an online petition, pleading with Interpol to have Henry beaten to death with his own arm by a blind Irish nun over a period of 6 months.As a result of this, france invaded Ireland, but was quickly defeated by an army of hungry leprechauns.

Thierry Henry will be starring in a film about his injustice,cheating and outright selfishness towards the Irish football team and screwing there chance to go on and retain the World Cup they had won againts Soviet Russia in 1845. How ever Va Va Frog ruled out speculation of production for the film insisting he wants to consontrate on his handball career. Luckily Samuel L. Jackson spilled the snails by mentioning the film in a recent interview. Samuel went on to say he would playing William Gallas in the blockbuster tipped movie say William will not be available as he will be more then likely crying. The movie is titled The Hand That Rocks The Orish and is set be under production in 2076. 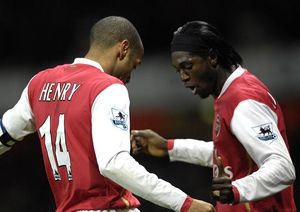